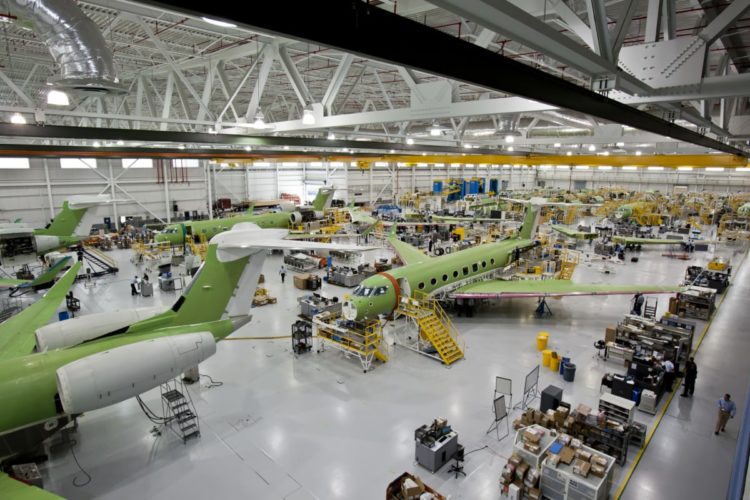 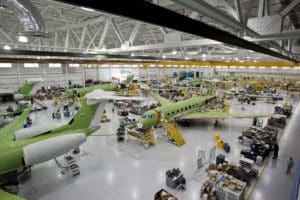 “Our manufacturers and exporters sent almost $40 billion of goods to the global marketplace last year, and three-quarters of the state’s 18 Fortune 500 companies operate on a global scale,” Rajeev Dhawan wrote in his “Forecast of Georgia and Atlanta,” released Wednesday.

“Not only the Brexit decision [for the United Kingdom to leave the European Union] but also overall global economic health issues, such as China’s stalled economy and oil-driven budgetary constraints in the Middle East, are key factors in our domestic-led growth,” Dhawan wrote.

According to the Census, Georgia exports categories of goods that include civilian aircraft, engines and parts ($6.2 billion); medical needles and catheters ($450 million); carpets and flooring ($347 million); chicken and parts ($729 million); kaolin ($493 million); and automobiles ($2 billion).

Events in Europe are of particular concern to Georgia manufacturers and the business of exports.

According to the Census, the U.K. accounted for 4.7 percent of Georgia’s exports in 2015 and has been increasing its share steadily since the 3.1 percent rate recorded in 2011.

At some point, the U.K. is to exit the European Union because of results of a referendum in June. Dhawan predicted the maximum hit to the U.S. economy will be a negative 0.3 percent impact on GDP growth.

Regardless of how the withdrawal shakes out in terms of Georgia/U.K. trade relations, Dhawan noted that the bigger issue is how the EU’s economy will respond to the withdrawal. The EU accounts for 15 percent of state exports, excluding the U.K., Dhawan observed.

Canada was the Peach State’s top trade partner in 2015, followed by Mexico, China and the United Kingdom. Credit: census.gov

“With the EU already on fragile footing, the U.K.’s eventual exit could push their economic activity lower and affect the importing capabilities of its countries. However, the drop in exports to Canada, China, Singapore, Brazil and Japan (accounting for more than 33 percent of state exports) will have greater impact,” Dhawan said in his “Forecast of Georgia and Atlanta.”

Georgia’s corporate sector has benefitted from the flight to safety of international investors, Dhawan observed. The positive cash flow prompted the creation of 16,5009 in the first half of 2015, just off the pace of last year, Dhawan observed.

Manufacturing didn’t share the gains. About 800 manufacturing jobs were created in the first half of 2015. This occurred even though Georgia didn’t suffer the setbacks notched in states that produce shale oil and gas, sectors that have collapsed amidst low energy prices.

The construction sector benefitted from a surge in permits for the first half of 2016. But Dhawan doesn’t expect the trend to continue. 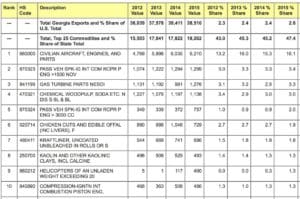 Georgia’s top export product in 2015, by far, was civilian aircraft, engines and parts. The category was more than three times the value of all automobiles built in the state. Credit: census.gov