Several new reports paint a fairly grim picture of the solar industry in Georgia, including one that shows the state lost 14 percent of the jobs last year that had been created in the solar industry. Georgia policymakers and the Trump administration’s tariffs are responsible for the downturn, reports contend. 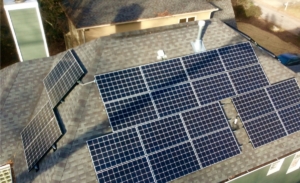 Tax credits for residential solar panels begin phasing out in 2020 and are to be eliminated by 2023. File/Credit: Special to saportareport.com

That said, the industry evidently is sifting through various indicators to determine its exact posture.

In January 2018, a report by the Solar Energy Industry Association predicted that Trump’s 30 percent tariff on Chinese-manufactured solar cells and modules would result in the loss of 23,000 solar-related jobs nationwide in 2018.

The Solar Foundation issued a jobs census last week that shows 8,000 jobs were lost nationwide from January through November 2018. Georgia’s share of the reported job loss was 614, leaving the state’s solar industry with 3,696 employees, according to the foundation’s report.

One constant in the various reports is that Georgia leaders have chosen against investing in the solar sector. After a reasonably strong start, progress has slowed, particularly in the smaller solar arrays of the types mounted on the roofs of houses and businesses.

The situation in the rooftop sector has reached the point that Russell Seifert, chairman of the Georgia Solar Energy Association, highlights it in his column in this month’s newsletter: 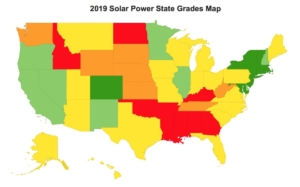 Georgia now is ranked ‘F’ for a shortage of regulations to encourage consumers who want to install solar arrays, but the state could improve with ‘a little push in the right direction,’ according to solarpowerrocks.com. Credit: solarpowerrocks.com

Seifert’s optimism notwithstanding, reports show Georgia’s forward momentum in promoting solar as an alternative source of energy has dwindled. Here are a few examples: 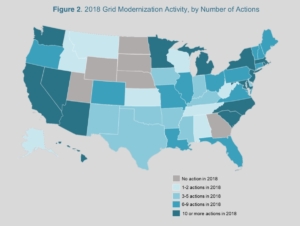 Georgia is among six states that took no action in 2018 to enact statewide measures related to the storage of electricity or the grid system. Credit: North Carolina Clean Energy Technology Center
statewide incentives or changes to existing incentives for energy storage, microgrids, and other modern grid technologies;

Georgia has 58 incentives and policies that support renewables and energy efficiency. That compares to 13 in coal-producing West Virginia; 100 in the Sunshine State of Florida; 57 in New Mexico and 226 in California, which has the most such programs.

Of note, DSIRE itself is an apparent casualty of the debate over solar. DSIRE was established at NCSU in 1995 and has been funded by the U.S. Department of Energy. That funding is no more, according to DSIRE’s request for donations:

Previous Article
Bill from GA governor would expand public spending on health care, but critics say not by enough
Next Article
Familiar Notes