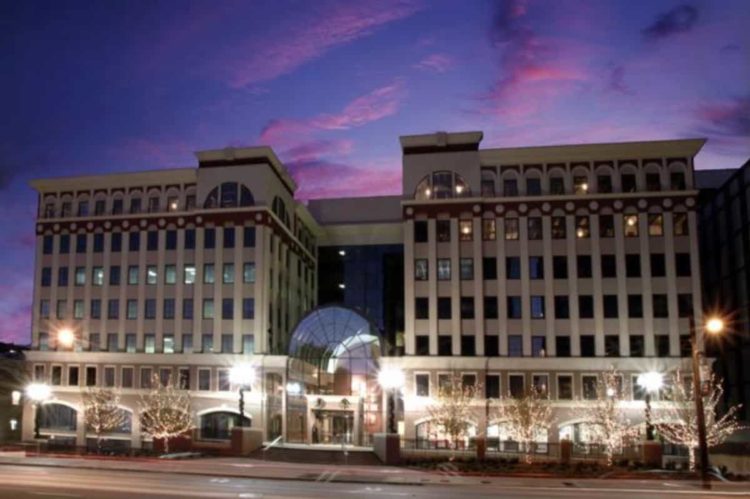 Pershing Point Plaza, in Midtown, clinched a deal with enviro-friendly Kaiser Permanente to lease more than a third of the green certified building. Credit: greenstone-properties.com

When CBRE examined the demand for green certified office space in metro Atlanta, the example it highlighted in a new report was the decision by health data giant Kaiser Permanent to locate in a LEED certified building in Midtown. 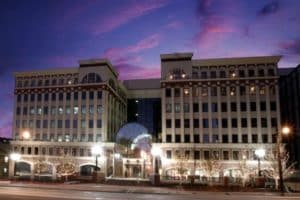 Pershing Point Plaza, in Midtown, clinched a deal with enviro-friendly Kaiser Permanente to lease more than a third of the green certified building. Credit: greenstone-properties.com

Pershing Point Plaza is a prime example of an owner’s response to tenants who value energy efficient buildings. It’s older, built in 1960. And owners of the 410,357-square-foot building chose to keep up with the times to remain competitive in the Midtown market – earning a LEED Silver certification in 2013, according to the Green Building Council.

David Pogue, CBRE’s global director of corporate responsibility, said Monday that big buildings, measuring more than 250,000 square feet, in big markets, such as metro Atlanta, have little choice but to improve and document their energy and water efficiencies.

The CBRE report, Green Building Adoption Index, shows metro Atlanta is a top tier market in terms of the proportion of commercial building stock that is green certified. Here are some details:

Green efficiency might have been a deal maker or breaker for Kaiser Permanente when it chose to lease 157,318 square feet in Pershing Point Plaza. The company has been on the forefront of sustainability for more than 50 years. In 1963, naturalist Rachel Carson was invited to deliver a lecture – “Man Against Himself” – to employees at an annual Kaiser Foundation Hospitals and Permanente Medical Group symposium, according to a report by the foundation.

Without speaking to the Kaiser Permanente example, Pogue said the numbers in CBRE’s new report show that sustainability is now a given in top tier markets.

“From my perspective, if there are any concerns that the commercial real estate community hasn’t taken this seriously or hasn’t done its part, that is wrong,” Pogue said. “There is a role to be played and there is a role they have played. Institutional owners and their buildings have been sensitive to this issue, and they have responded.” 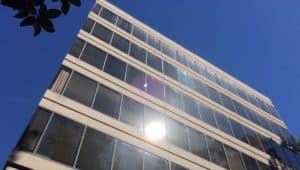 Sunlight reflects from the windows of this green certified building at Piedmont Center, in Buckhead. Credit: David Pendered

That said, the report shows a leveling off of the amount of green certified space and buildings that are on the books across the country.

Pogue attributed the drop in part to CBRE’s decision to age out green certifications as they lapsed. In some cases, the building owner/manager may have decided not to incur the cost or paperwork required to maintain certification.

The fluctuations don’t take away from the broader trend toward acceptance of green building practices, he said.

“The green revolution has been won, at least at the higher levels of the institutions,” Pogue said.

“We can quibble about a tenth of a point,” Pogue said of the fluctuations. “The data set shows this has been a rocket. It went from no one caring about this, to, if it’s a big building in a big market, it’s highly likely you care about it and your building has these types of certifications.”

Previous Article
Auburn Avenue Research Library offers resources for and by the community
Next Article
Before the final debate, breaking news from 300 BC