Editor’s note: This story has been updated. Some information has been removed; other information added, beginning with the paragraph, “On Monday afternoon….” and concluding at the end of the section that begins, “Phase 2….”

In the race to acquire land for greenspace before the land is otherwise developed, Atlanta and Sandy Springs are pursuing projects with plans to pay for them with impact fees that are more than 10 times higher in Sandy Springs than in Atlanta. 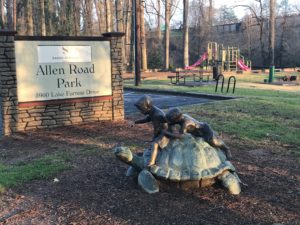 Atlanta is in the process of buying a snippet of land, 0.18 acres, next to Kirkwood Urban Forest, and intends to add it to the forest. The Sandy Springs City Council agreed last week to buy 1.5 acres next to Allen Road Park and add it to the park that abuts the northern edge of I-285, a block west of Roswell Road.

Both cities are paying with impact fees, which are one-time fees assessed on new developments. Proceeds of the fees are to be spent to offset a development’s impact on transportation, police and fire, and parks.

Atlanta charges a pittance compared to the city on its northern border. Consider just the impact fees charged for parks: 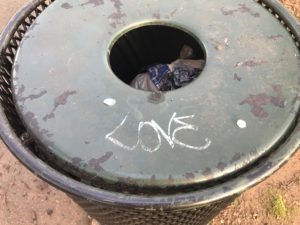 The word LOVE is written on a trash can in Sandy Springs’ Allen Road Park. Credit: David Pendered

Sandy Springs updated its rate structure for impact fees in 2016 from a prior rate scale set in 2008.

Atlanta’s current effort to raise rates was launched in January 2019 by the Atlanta City Council.

Some on the council had expected to have recommendations by now. The goal was raise the rates and use the higher proceeds to help fund the Fiscal Year 2021 budget that takes effect July 1 – helping to pay some costs associated with transportation, police and fire, and parks. To that end, the council voted in January 2019 to re-establish the state-mandated Impact Fee Advisory Committee that can address the rate structure. Little happened for months.

On Monday afternoon, a spokesman for Mayor Keisha Lance Bottoms reached out to say a previous edition of this story included a timeline that was, “categorically untrue.” In response, that timeline has been removed from this edition of the story. In its place is the administration’s verbatim timeline for producing the recommendations.

As noted in the administration’s report, presented Nov 12, 2019 to the council’s Community Development Committee, the schedule – in its entirety – states:

On Nov. 5, 2019, the panel held its first working session. Meantime, between January and November, the administration determined that it wanted to retain the consultant who worked on a prior review, Duncan Associates. The council voted Jan. 21 to authorize that contract, at up to $41,100. 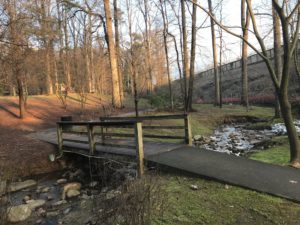 A wooden footbridge over a stone-filled creek that mitigates stormwater runoff is tucked beneath the retaining wall of I-285, visible in the distance. Credit: David Pendered

On Thursday, the panel is scheduled to meet at Atlanta City Hall. The agenda shows a two-hour meeting comprised of 85 minutes for staff updates and 25 minutes for public comments. The five-member panel is chaired by Mallory Peterson, a senior vice president with Selig Development Co., a subsidiary of Selig Enterprises, which is a commercial leasing, management and development company with a significant portfolio in Atlanta.

The parcels that Atlanta and Sandy Springs are acquiring for future greenspace include: 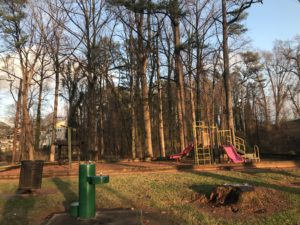 Allen Road Park, in Sandy Springs, is a popular spot for area residents when temperatures are warmer than they were after the snowfall on Feb. 8. Credit: David Pendered 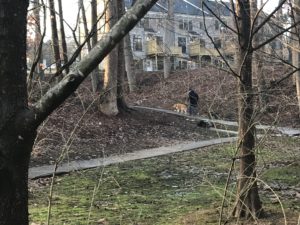 A dog walker and dog walk the path at Allen Road Park, evidently unfazed by the chilly temperature after the snowfall on Feb. 8. Credit: David Pendered

Previous Article
Over 8,000 healthy trees felled yearly as promised protections stall
Next Article
The Stitch’s benefits far outweigh any challenges in bringing it to life