Construction of Atlanta’s controversial public safety training center may be legally barred by a pollution-runoff cap, according to an attorney for an environmental group that is also questioning the legality of the facility’s footprint.

The South River Watershed Alliance (SRWA) has raised the issues with DeKalb County as it continues to consider a land disturbance permit (LDP) application for the Key Road facility sought by the Atlanta Police Foundation (APF), the private nonprofit planning the site on behalf of the City. 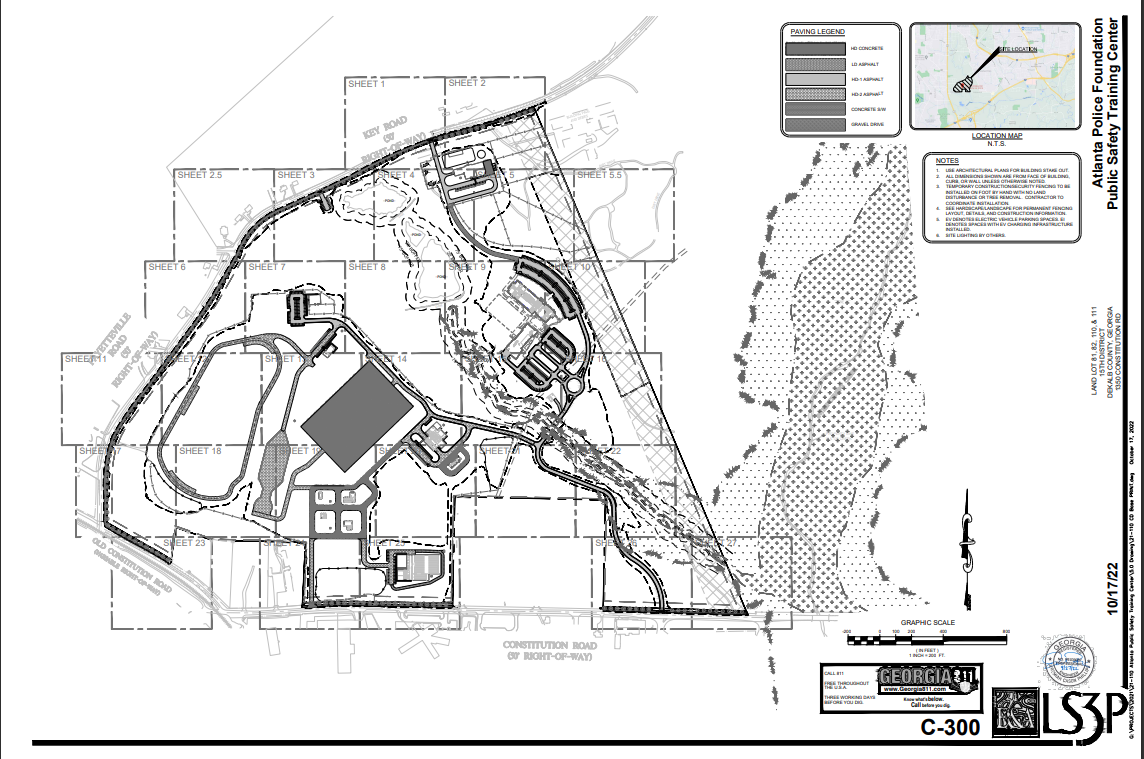 SRWA Board President Jacqueline Echols says any construction would violate a state regulatory cap on sediment runoff in the heavily polluted Intrenchment Creek, which is already “maxed out… So there is no additional sediment [allowed] and you cannot build any kind of development site.”

Echols and other local residents are also questioning the facility’s proposed footprint, which is authorized in a City lease to be “approximately 85 acres” but is spread over much of a newly redrawn, 171-acre parcel. “The [lease] ordinance says 85 acres – it doesn’t say 85 acres spread out,” said Echols. “And that’s what folks were looking for, 85 compact acres.”

The County did not respond to questions about the LDP review. While APF has led the funding and promotion of the facility and sometimes answered questions about it in detail, spokesperson Rob Baskin now says, “All news media queries regarding the Public Safety Training Center are being handled by the City of Atlanta.” City spokesperson Michael Smith said his office would “look into this,” but gave no further response.

In a Nov. 2 letter to County planning officials, SWRA attorney Jon Schwartz called for rejecting the LDP application because clearing and grading for the training center would “exceed the remaining annual sediment load allocation for Intrenchment Creek” as established by the Georgia Environmental Protection Division (EPD).

EPD’s annual cap on sediment runoff in the creek’s watershed is 945 tons, Schwartz said, indicating it is highly unlikely that mass grading of such a site could happen without any runoff. Even if it could, he wrote, that sediment load is already vastly exceeded by two of the City’s own sewage facilities, which reportedly discharging 6,471 tons a year but are exempt from the legal cap. The training center cannot exceed the cap without violating state and federal laws, Schwartz wrote.

“Intrenchment Creek doesn’t have any remaining pollutant load allocations for sediment, and the applicant hasn’t demonstrated it can clear the forested site without discharging sediment into Intrenchment Creek,” Schwartz wrote. He said the County is therefore legally barred from issuing the LDP unless APF can prove there will be no sediment runoff.

His letter did not address other possibilities, such as the state raising the sediment cap or the City lowering discharges from the sewage facilities. However, even if those options proved feasible, they seem unlikely to happen on the quick timeline APF and the City are seeking for construction, which aims to wrap up by 2025.

As things stand, said Echols, “This is wrong and it just shouldn’t go forward because there are alternatives.”

Echols and Schwartz said this week they have not heard a response from the County beyond that the LDP review continues. In an email to County planning officials last week, Schwartz also warned that the application could be approved by default, under state law, by Nov. 21 if they fail to either approve or reject it themselves. That status was unclear, as County officials did not respond to questions.

APF has not presented the LDP application to meetings of its Citizens Stakeholder Advisory Committee (CSAC), citing security concerns, though it is a public document. At a Nov. 29 CSAC meeting, planners discussed some aspects of the LDP application, including tree removal plans and sidewalk requirements, but not any environmental issues or the process as a whole beyond indicating it is still under review.

A fundamental controversy about the training center was the City and APF’s secret selection of the site of the former Atlanta Prison Farm in unincorporated DeKalb County and the impacts on what is now a largely forested property of about 296 acres. APF originally proposed the training center as a 150-acre facility. In a nod to the opposition, the Atlanta City Council hurriedly cut that size down to approximately 85 acres days before passing the lease legislation in September 2021.

The rest of the site was pegged as greenspace amounting to 265 acres, of which 170 had to be publicly accessible. However, critics have long noted that math was problematic because the lease said the overall site is around 381 acres, while DeKalb property records — and now the training center plans as well — show it is actually just over 296 acres in total. 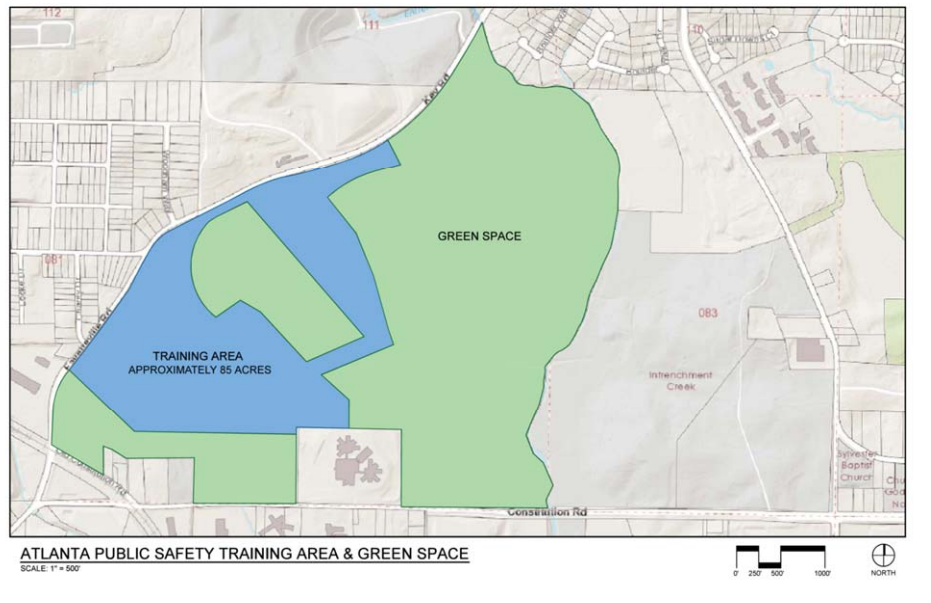 The public safety training center site plan as shown in the lease approved last year by the Atlanta City Council.

The SWRA is concerned that APF and the training center are at least effectively controlling, and possibly actually building on, a much larger area than allowed in the lease. The APF recently got approval to combine two of three parcels on the property and to redraw the boundaries of those remaining. The result is that the proposed training center is within a 171-acre parcel on the western end of the property and comprises more than half its acreage.

According to the latest revision of the LDP application, the actual land to be built upon amounts to 86.92 acres – arguably within the definition of “approximately 85 acres.” But the facility is spread around the parcel and APF would control much of the access to it.

In addition, the proposed footprint is significantly different from a rough illustration approved by City Council in the lease as the “premises,” in part due to CSAC input. The lease showed the facility centered on the northwest portion of the site, adjacent to Key and Fayetteville roads, with a large green space in the middle where existing ponds would remain, and another consolidated green space in the southwest. But in the final plan, much of the facility has shifted south to Constitution Road. The green space around the pond largely remains, and APF has proposed using part of it for a partly public training lawn. The rest has been broken up and stretched into more of a perimeter area.

The lease allows the mayor or someone designated by the mayor to amend the deal to suit whatever acreage is needed in the final design. It is unclear if and when that happened.

The lease language also allows leeway for the size of the facility. APF agreed to use the “minimum acreage necessary” for the facility, which was “expected to be approximately 85 acres.”

Echols said the APF is essentially getting more than twice the space than the 85 acres specified in the lease.

“That’s never the way it was presented to the public, or the council, for that matter,” she said. “That just changes the whole deal.”

“You know it’s just a matter of time before that acreage fills up,” Echols added. “There will always be an expansion… And once you get your footprint down and approved, you can do that.”

Echols said she understood that area residents raised the issue to the CSAC. Echols said that CSAC Chair Alison Clark raised the issue with APF and received some type of illustration showing the specific footprint outlined and within the 85-acre allotment. The CSAC has not publicly discussed the issue and Clark did not respond to SaportaReport questions.

Echols said the SWRA is contacting City Council members about the footprint issue.

“The $64,000 question is, how do you force a city to enforce its own ordinance?” she said. “And I don’t know what that would be. Usually there’s enough integrity associated with it for the City to do what it said it’s going to do in the ordinance.”