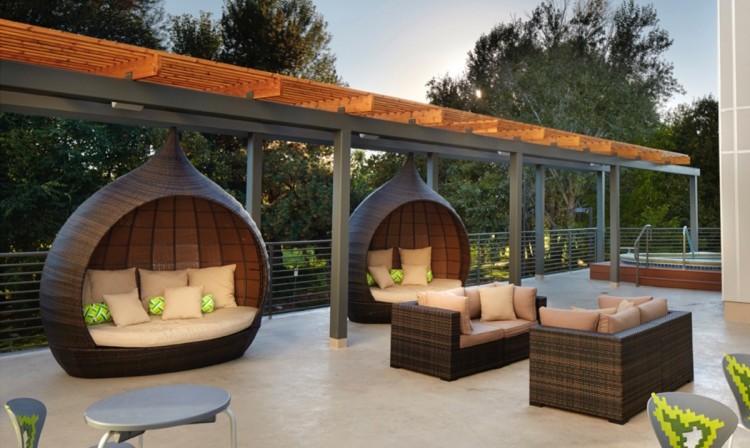 A consortium that includes Georgia State University was named Monday as the preferred bidder to redevelop Turner Field and about 70 surrounding acres. Atlanta Mayor Kasim Reed heralded the decision. 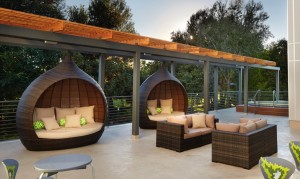 “I am pleased with the Atlanta/Fulton County Recreation Authority’s unanimous decision to sell Turner Field to Georgia State University and Carter,” Reed said in a statement.

The consortium includes Georgia State, Carter, and Oakwood LLC. This bid prevailed over two others, submitted by Mercury Youth Organization Inc. and Rita World Pearl Kingdom LLC. GSU has always been the presumptive favorite, given its role since 2000 in rejuvenating the central business district.

Carter has developed a niche in the realm of student housing. Its projects in cities including Ann Arbor, Mi., Oxford, Miss., San Antonio, Tx., and Boise, Id. illustrate that modern student living quarters are following the model of mixed use developments.

One selling point was the notion that the consortium plans to complete the redevelopment in five years, according to Keisha Lance Bottoms, executive director of AFCRA, the authority that oversees Turner Field.

This is a fairly aggressive schedule, given the history of the area.

The Braves baseball team reportedly tried for years to get a transit rail line built to Turner Field from MARTA’s Georgia State Station. But the reported price tag, somewhere close to $370 million, evidently was a deal breaker. 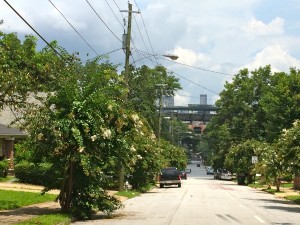 Turner Field is flanked by streets lined with crepe myrtle, such as Crew Street just south of the ballfield. The surrounding neighborhoods have not benefited from the back-to-the-city redevelopment cycle. File/Credit: Donita Pendered

Atlanta’s development arm, Invest Atlanta, created an economic stimulus in the area in 2006 to spur development. But on the eve of the Great Recession, no major developers took the bait. Invest Atlanta had created a tax allocation district that was to improve the neighborhood by steering all property taxes generated by new development to improving the roads, streets, sidewalks and parks in the tax district.

Meantime, Atlanta has been working to address inadequate sewerage in the area that results in periodic flooding, much like has occurred west of the future Falcons stadium. These downtown neighborhoods have a history of flooding during heavy rains.

Atlanta is implementing a sewer system that’s similar to the one that resulted in the water feature at the Old Fourth Ward Park, along the Atlanta BeltLine. As with the park pond fed by Clear Creek, the idea is to detain and filter runoff rather than direct it into the city’s sewage system.

The project hit a bump this summer when some residents resisted selling their homes, an issue that crystallized around 93-year-old Peoplestown resident Mattie Jackson. After weeks of protests, Reed announced Jackson would not have to move and that the city would examine alternative measures to resolve flooding.

Atlanta plans a storm water management system that will use permeable pavers, bio-swales, detention ponds and storage vaults to capture from 10 million to 30 million gallons of storm water in specific areas near Turner Field. 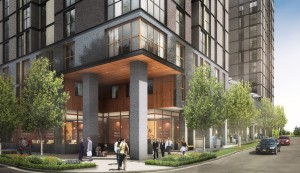 Carter has demonstrated its capacity to provide mixed use projects that combine retail with student livingLofts, including Foundry Lofts, at the University of Michigan. Credit: carterusa.com

Statements issued by Reed’s administration and the Atlanta-Fulton County Recreation Authority portray the selection of a vendor as a final decision. However, quotes attributed to the chair and to the executive director of the AFCRA board indicate negotiations continue.

“After a through review of all the proposals, including in person presentations, the board of the City of Atlanta and Fulton County Recreation Authority has a preferred bidder and will commence negotiations immediately,” William K. Whitner, chair of the AFCRA board, said in a statement. “We will move forward expeditiously to ensure that we make meaningful progress toward determining the future of this historic neighborhood.

“Several details have yet to be mapped out,” Bottoms said in a statement. “However, I, along with our board chair, will now lead negotiations to finalize an agreement. As we enter this phase, we will continue to work with the surrounding community and partners in the city and county to ensure that they continue to play a vital role in this process.

“Our most important objective is that the future redevelopment of this area is one that we can all be proud of. We believe that we have the right match for Turner Field and the surrounding communities,” Bottoms said in the statement.

The selection was based on factors including the consortium’s capability to renovate or replace Turner Field with a major facility; to provide housing, retail and employment opportunities for existing and future residents, to incorporate Atlanta’s sports history into redevelopment proposals and to complete development within five years, Bottoms said.