In recent years, Georgia has become a prominent player on the national arts stage as a major hub for television and film and is home to some of the most popular musicians today. But with a more concerted effort, how much more impactful could Georgia’s art scene be?

To answer that question, Gwinnett County is drafting its first-ever arts and creative economy master plan — Create Gwinnett. Once completed, the plan will be integrated into the county’s 2050 Unified Plan, with Gwinnett currently operating under its 2040 plan.

Create Gwinnett is intended to facilitate more artistic opportunities, foster creative spaces and bolster the arts economy while also strengthening and celebrating what makes Gwinnett unique. With about seventy-five percent of the county left in unincorporated territory — meaning only 25 percent of Gwinnett falls into a city — a comprehensive master plan is essential for the county’s creative sector to blossom. 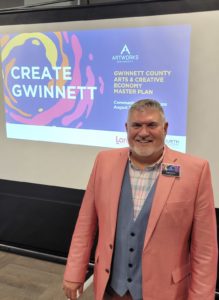 Anyone who lives, works or plays in Gwinnett is encouraged to submit their input via the online survey, which is open until Sunday, Oct. 16.

For Holmes, success looks like many things — a child honing their craft through their school’s curriculum or a resident attending cultural events that wouldn’t otherwise be available. The idea isn’t to only appease the art lovers but to create accessibility for all residents.

“We’re looking at opportunity,” Holmes said. “[We want] individual citizens to build a sense of space within where they live. The goal is that people can create their own sense of community but also be engaged in the process of helping take care of everyone around them, too.”

He continued: “I look at Gwinnett kind of like [Disney’s] Epcot. I want people to be able to travel from village to village and experience art and culture.”

During the drafting process, the team is looking at communities that do an exceptional job of supporting their arts communities and have similar demographics as Gwinnett, including areas like Fairfax, Va., Adams County, Colo. and Vancouver, Canada.

The folks at the Aurora Theatre, a top arts institution in Gwinnett and beyond for the last 27 years, are glad the county is making a concerted effort to support the arts community. The Aurora has been noted as a top contributor to the revitalization of Lawrenceville’s downtown area.

“I am very inspired by the huge impact that the Create Gwinnett master plan could provide,” said Ann-Carol Pence, Aurora co-founder and producing artistic director. “At this point, [its success] really lies on the amount the county is brave enough to invest.”

Aurora Director of Sales and Programming Al Stilo added that the arts are key for attracting outside visitors, which bolsters the rest of the economy. In 2020, according to the National Endowment for the Arts, Georgia’s arts and cultural production added $23.8 billion or 3.8 percent to the state’s economy. Currently, though, Georgia is among the lowest in the nation for arts funding, with only 14 cents per capita.

“The restaurants, the shops, all the businesses get lifted up by the consumerism affiliated with the arts,” Stilo said. “We’re not asking for handouts or gifts; we’re asking for an investment in the community.” 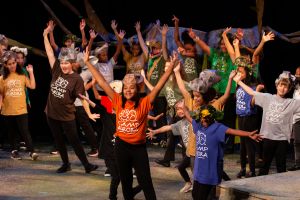 The Aurora offers camps, classes and internships for students of all ages to hone their craft. (Photo courtesy of Aurora Theatre.)

The team also hopes the county uses its leadership to encourage kids to flex their creative muscles, support lesser-known creatives and bolster diversity in the arts.

“We’ve always put diverse on-stage talent at the top of our list because every single child that walks into the Aurora needs to say, ‘They look like me,’” Pence said. “Two young Black princesses came to Cinderella in white gowns with blue sashes and tiaras. For them to see a mirrored image of [themselves] brought one of those two kids to tears.”

Stilo reinforced this sentiment, adding that the county government can set a standard of prioritizing the arts within Gwinnett and beyond.

“The more important the arts are to our leadership, the more important it will be to the citizens,” Stilo said. “The more leadership recognizes the importance of this industry in all its facets — as a job creator, economic driver, social connector and place of beauty and joy. [Art] is what’s going to last. This is our legacy.”

To learn more about Create Gwinnett and leave your input — open until Oct. 16 — click here.