Gwinnett County’s dramatic demographic shift illustrates question: “Who are We?”

The notion that Gwinnett County is home to a population that’s predominately white and affluent is as out-of-date as the idea that two painted water towers along I-85 in Norcross still proclaim: “Success Lives Here.” 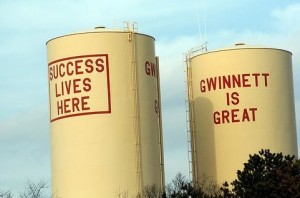 Gwinnett County’s iconic towers were demolished in 2010, the same year in which the Census recorded stunning shifts in the county’s demographics. Credit: www.11alive.com

The 40-year-old towers were torn down two years ago. In the decade before their demolition, 40,000 whites had moved out of Gwinnett. Now, the county’s population is predominately non-white, and less wealthy and less educated than it was in 2000.

The demographic shift in Gwinnett speaks to the broader question of “Who are We?” That was the topic Wednesday, at the quarterly meeting of the Atlanta Regional Housing Forum.

Out of the entire two-hour program, the most stunning report was provided by Lejla Slowinski, executive director of the Lawrenceville Housing Authority.

Slowinski provided a snapshot of Gwinnett’s population that gave some real heft to the demographic report on the metro Atlanta region that was delivered by Michael Rich, an associate professor of political science at Emory University who heads Emory’s Office of University-Community Partnerships.

Slowinski prefaced her remarks by saying she would talk later about ways in which Gwinnett’s civic and government leaders are leveraging the county’s diversity. But first, she said, she wanted to provide a bit of context about Gwinnett.

Speaking without any visual aids, such as a PowerPoint slide show, Slowinski riveted the audience’s attention with a cascade of nuggets derived from the 2000 and 2010 Census reports. The data shows that Gwinnett isn’t just changing – it is a changed community:

Sources other than the Census provide additional insights:

One relevant point is that Gwinnett’s government and school board are trying to serve the human needs of this population with an ever-decreasing amount of tax revenues.

At the Piece by Piece annual meeting last week, Gwinnett County Commission Chairman Charlotte Nash said the county’s digest has dropped 25 percent during the past five years. That decrease has reduced the amount of property taxes collected by the county and school system, which is the main source of funding for both governments.

“The population has continued to diversify,” Nash said. “According to the 2010 Census, Gwinnett was the most diverse county in the southeast. That very different from what it was 20 years. It’s created language considerations, and the demand for additional types of flexibility in terms of how we deal with the community.”

Slowinski said the Gwinnett County Chamber of Commerce works diligently to reach out to, and serve, the minority business community. The number of firms owned by Hispanics and African Americans is still a small proportion of the overall mix, but it’s growing, she said.

“Gwinnett wants to be a middle of the road county, but also can see itself being an international gateway, and some of that is evident in the efforts to bring a [commercial] airport to the county,” Slowinski said. “They really are pushing the concept of, ‘Success Lives Here.’”

At the start of the meeting, Rich set the framework for the forum’s conversation. The purpose of the quarterly housing forum was to discuss ways in which changing demographics are reshaping the region.