Henry County has a perfect recipe for traffic: a booming population, rapidly expanding urban areas, and public transit commuting rates under 1%. Now the southeast metro county is prepping a 30-year Transit Master Plan that is close to proposing specific expansion ideas in advance of a November sales-tax ballot question that could start funding some of them.

“One of the most important elements that we’re working on is establishing a long-range transit vision for Henry County. That hasn’t been done,” said Regan Hammond of the planning firm VHB at a June 3 update to the Atlanta-Region Transit Link Authority (The ATL) board. The county and the ATL are cooperating on the plan. 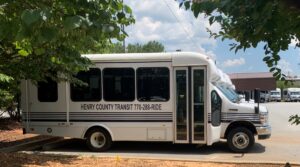 The municipal government of Stockbridge, the largest of the county’s four cities, is among the plan’s supporters.

“The Henry County Transit Master Plan has an aggressive approach to ease the traffic congestion and to prepare the county for future growth,” said Mayor Anthony S. Ford in an email. “The City of Stockbridge looks forward to actively assist in developing the plan for our community stakeholders.”

The plan could end up proposing alternatives ranging from on-demand shuttles to various types of buses and trains.

But, Hammond said, it also will have to “educate” residents, especially in more resistant rural parts of the county, about the traffic and economic benefits of public transit. She said “perspectives concerning MARTA” are still an issue. She didn’t go into detail about those objections, but metro suburbs historically resisted expansion of Atlanta-centered MARTA by expressing crime fears weighted with racist and classist sentiment. The ATL itself is partly a way to brand a metro-wide transit system without using the MARTA name, and Hammond said localized branding of Henry County’s service will be proposed, too.

“Acceptance of transit in Henry County is still a bit of a challenge,” said Hammond, laying out a message “that it’s not a one-size-fits-all and hopefully help those who may be doubtful about transit in the county to understand that it is an option.”

On the other hand, pre-pandemic figures gathered for the study, which launched in October 2020, show significant demand for the smattering of existing transit in the county. That includes Henry County Transit, a bus and van service that operates during the day on weekdays, offering rides by pre-scheduled reservations only. The state’s Xpress commuter bus and subsidized vanpool program also operate in the county.

In 2019, Henry County Transit had 70,650 passenger trips, according to VHB. That same year, the Stockbridge Park and Ride stop of the Xpress bus saw over 60,000 boardings.

That kind of growth means expanding ways for workers to get to job centers in Downtown, Midtown, Perimeter Center and Hartsfield-Jackson Atlanta International Airport. It also means opportunity for transit-oriented development, which the plan will address, Hammond said.

Besides the 30-year, long-term picture, the plan also will propose short- and medium-range improvements, meaning projects that could be done in two to six years.

Connections to regional transit will be addressed as well. Several metro counties have their own transit master plans in the works or recently completed, including Henry’s neighbors in DeKalb and Rockdale.

Henry County intends to put a ballot question before voters in November for a special local-option sales tax to fund transportation projects, which could include work on transit projects.

For more about the plan, see HenryTransitMasterPlan.com.