Twenty years ago, the media gathered in Atlanta’s East Lake neighborhood likely would have there to report a homicide.

On Tuesday, the media was there to cover Atlanta Mayor Kasim Reed and U.S. HUD Secretary Shaun Donovan proclaiming the renewal of the once-blighted community as a national success story about public private partnerships. 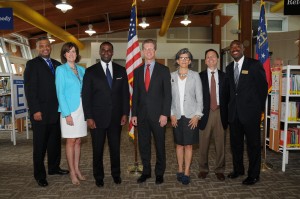 The transformation of the old East Lake Meadows housing project is so profound that nearby homes are now priced at up to $775,000. Donovan said rising property values are a good thing in a city, and that the increased property taxes enable local governments – such as Atlanta’s – to provide programs that keep such neighborhoods affordable to households with a mix of incomes:

The venue for the media event was the Charles Drew Charter School, which is a focal point of the East Lake community that was turned around through a partnership of the Atlanta Housing Authority, HUD’s HOPE VI program, and the foundation established by Atlanta developer and philanthropist Tom Cousins.

A few minutes before Donovan outlined his thoughts on the affordability issue, Reed had reminded the audience that it wasn’t so long ago, at a time he was coming of age, that East Lake was known by nicknames that included Little Saigon and Vietnam. 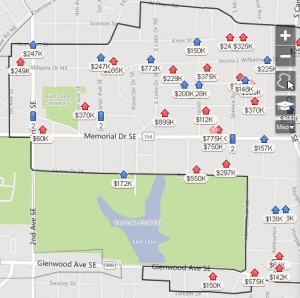 The price of houses in the East Lake neighborhood have increased significantly since the area was improved by a partnership including Atlanta Housing Authority, HUD, and the philanthropy of Atlanta developer Tom Cousins. Credit: zillow.com

“We really don’t remember where we are,” Reed observed, standing in the school’s media center, with elementary pupils studying at desks a dozen feet behind the podium.

Signs of renewal have become so established over the past two decades that East Lake appears to have always been a comfortable neighborhood.

A mile away from the Drew school, preparations were underway at the East Lake Golf Club for the final four days of the Fed Ex Cup golf tournament, which starts Thursday. A purse of $1.4 million and the final trophy of the 2013 season are on the line at the home course of golfing legend Bobby Jones, according to bleacherreport.com. Admission on weekend days is priced at $75, plus taxes and fees.

Home prices have increased dramatically over time around the former East Lake Meadows housing complex, a place once so crime-ridden that mothers told their children to hide in closets when they heard gunfire.

Reed and Donovan said part of the challenge of urban renewal is making sure that surrounding communities remains affordable for a broad array of incomes.

“We simply call it,” Reed said of the government’s ability to help enforce affordability.

Reed said developments have become so costly that developers will increasingly seek financial assistance from local governments. When they come forward, as was the case in the Ponce City Market development along the BeltLine, the city can require that a certain number of units be affordable to households at certain income levels.

In Atlanta, such aid is provided through Invest Atlanta, which has several financial tools available to help a developer get a out of the ground.

The secretary added that he said a related program, Promise Zone, can help communities in other cities replicate the turn-around that was achieved at East Lake.