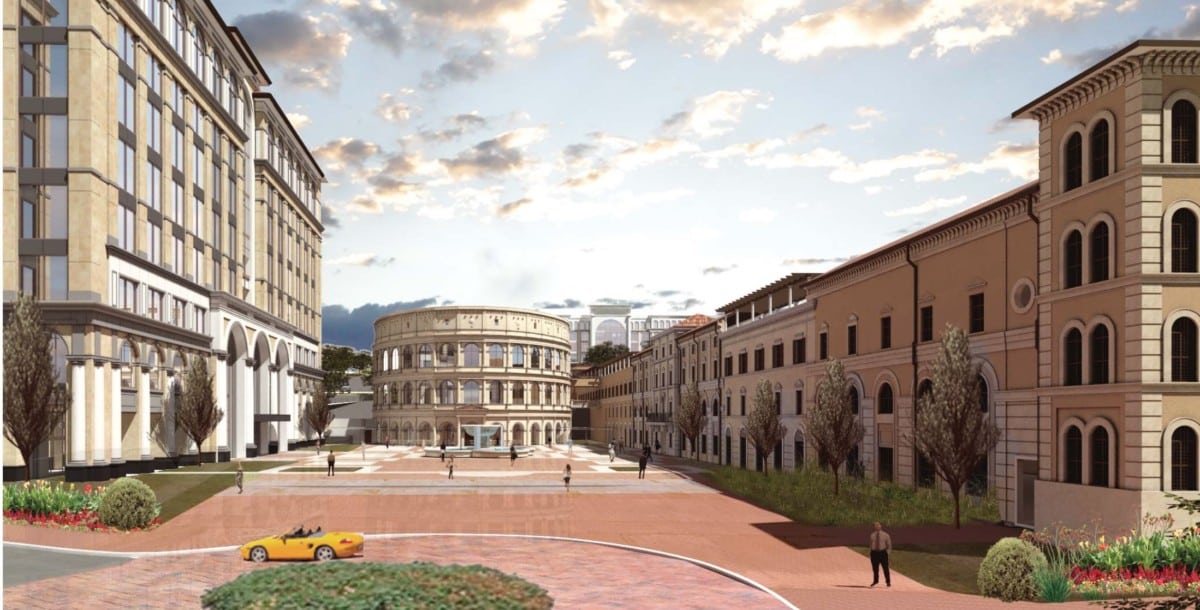 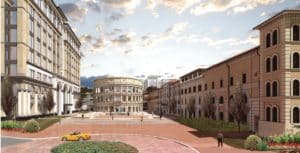 Gov. Nathan Deal and a host of civic and business leaders broke ground this morning on a $100 million expansion of the headquarters of Jackson Healthcare, a healthcare staffing company that intends to add 1,400 employees over the next five years.

This project is portrayed as the largest expansion of corporate headquarters planned in north Fulton County. As such, Jackson Healthcare is part of a corporate footprint that makes the Perimeter submarket one of the major corporate destinations in the region.

“Jackson Healthcare is a powerhouse job creator for our region,” state Sen. Brandon Beach (R-Alpharetta), president and CEO of the North Fulton Chamber of Commerce, said in a statement. “This project is going to continue to make North Fulton a destination to live and work.”

The expansion is to add 306,000 square feet of space to Jackson Healthcare’s existing office space. To put the amount of space in perspective, it represents about a third the size of Phipps Plaza.

Jackson Healthcare is adding an eight-story office building of 267,000 square feet. An additional free-standing building with amenities is to provide 39,000 square feet that will encompass a gymnasium, indoor pool, and full service restaurant for associates and their guests. Managers of nearby office buildings have tended to eliminate all food service in recent years.

When construction and related expansion plans are complete, the Jackson Healthcare complex is to encompass 550,000 square feet. That covers the existing 180,000 square foot headquarters, the expansion, and the addition of a newly purchased building.

“We are blessed with a company of dedicated associates who put others first and want to improve the delivery of patient care,” Shane Jackson, president of Jackson Healthcare, said in a statement. “In return, we are creating facilities that will make coming to work even more enjoyable and benefit their quality of life for years to come.”

The project represents the corporate expansion underway in the office submarket that includes the Central Perimeter area, in Dunwoody and Sandy Springs, and stretching north along the Ga. 400 corridor. 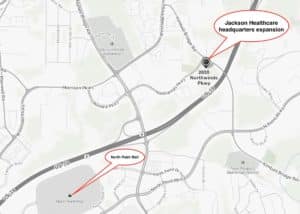 Jackson Healthcare is funding a $100 million expansion of its headquarters in Alpharetta to accommodate the addition of 1,400 new employees. Credit: mapquest.com, David Pendered

The office report on the first quarter, by Colliers International, shows the vacancy rate in the Central Perimeter submarket is on par with Midtown, at about 11.9 percent, and substantially lower than the 17.2 percent vacancy rate in Atlanta’s central business district, in Downtown Atlanta.

This emerging office market is one reason the state is involved in the $800 million expansion of the interchange at I-285 and Ga. 400. The retrofit is to serve workers commuting to and from the business district, whether by car or a bus operated by MARTA or GRTA.

The architect of the Jackson project is Rule Joy Trammell + Rubio, LLC Architecture + Interior Design (RJTR). The general contractor is Choate Construction, according to the statement. The partners have shared examples of their conceptual designs.

Jackson Healthcare currently employs 1,100 workers across the country including 900 associates in the Atlanta area. Jackson reported annual revenues of $798 million in 2015.

Previous Article
All electricity used in Atlanta to be generated from renewables by 2035, says Atlanta City Council
Next Article
Atlantans visiting Detroit discover a city rising from the ashes in unpredictable ways