Last summer, North Atlantic right whale #4615 was in desperate need of help. With a rope wrapped tightly around its tail, another trailing from its mouth and blooms of crimson blood seeping into the vast waters, it thrashed for hours on end in hopes of getting free.

“In all my [30] years of seeing entangled right whales, I have never seen an animal react so violently,” said Moira Brown, lead scientist at the Canadian Whale Institute. “It didn’t look like it was panicking, it looked like it was struggling to get out of those ropes.”

That’s one of the many strikingly powerful scenes captured in “Last of the Right Whales,” a documentary depicting the harrowing world of the critically endangered North Atlantic right whales and the people who have dedicated their lives to studying and protecting them. The 2021 film was created by Canadian documentarian Nadine Pequeneza and released by HitPlay Productions.

Environmental organizations Wild Cumberland and the Georgia Chapter of the Sierra Club screened the highly-lauded documentary — free-of-charge for anyone interested — on Aug. 24 at Atlanta’s iconic Plaza Theatre. Following the showing, experts took the stage to answer questions from the audience, including “Delta Surveys” pilot Dave Mattingly, Dayne Buddo with the Georgia Aquarium, Oceana representative Hermina Glass-Hill and Nancy Daves, a former marine conservationist at the National Oceanic and Atmospheric Administration (NOAA).

The regional advocates used the recent film to highlight the dire situation the whales face, urging folks to join their conservation efforts by submitting a comment to NOAA regarding the agency’s recent proposal to expand protections for the species.

Currently, there are fewer than 350 North Atlantic right whales left and under 100 females who can reproduce. The animals spend most of the year near New England and Canada, but migrate down to the warm waters of Georgia, South Carolina and Florida in the fall to birth and nurse their young.

Unfortunately, the case of NARW #4615 isn’t a unique one. Because the species swims along the Eastern coastline, and their migratory patterns are becoming increasingly unpredictable in search of food in the ever-warming waters, they face two potentially fatal threats — ship strikes and fishing gear entanglement.

NOAA estimates that 85 percent or more of right whales have been entangled at least once in their lives. Even worse, when the cause of death could be determined, all juvenile and adult right whale deaths between 2003 and 2018 were due to human activities. 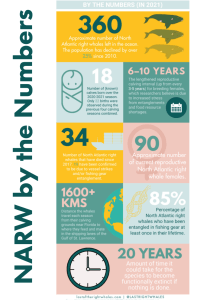 It’s easy to see what could’ve been for these animals. On average, the Southern right whale is 25 percent heavier and three feet longer than their northern counterparts because they can easily find food and the waters have less rope to avoid.

Things aren’t all bleak, though. After nearly 90 minutes of heart-wrenching scenes and expert testimonials, the documentary revealed that 18 calves were born in 2021, and following a communal sigh of relief, the crowd cheered.

While a step in the right direction, population numbers are still incredibly low. Following the film, the expert panel emphasized that to make long-lasting change, residents need to get involved and show lawmakers that the species’ survival is paramount.

“Unfortunately, it’s the states in the Southeast, between North Carolina and the Port of Brunswick, in which nobody is abiding by the speed vessel rule,” Glass-Hill said. “The challenging part of my job is the education, outreach and having Georgians reach out to our senators to support federal legislation.”

Glass-Hill encouraged folks to contact Senators Warnock and Ossoff to support the Right Whale Coexistence Act of 2022, which would provide funding for more research. Buddo agreed and stressed that public outreach is also essential to their protection.

“People conserve what they love and they love what they learn,” Buddo said. “We need to get policymakers to see the right whales. Nothing is more powerful than seeing it themselves.” 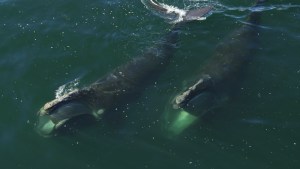 He continued, referencing the crowd: “We’re all here at 9 p.m. on a Tuesday, we are convinced already. But we do have a voice and I think we should shout it from the mountain tops as much as we can.”

Lastly, the group provided QR codes for attendees to submit a comment on NOAA’s recent proposal that would restrict vessel speed, further protecting the species.

“We’re only as healthy as the ocean itself,” Glass-Hill said. “As one of many species on this planet, we have an obligation to protect North Atlantic right whales.”