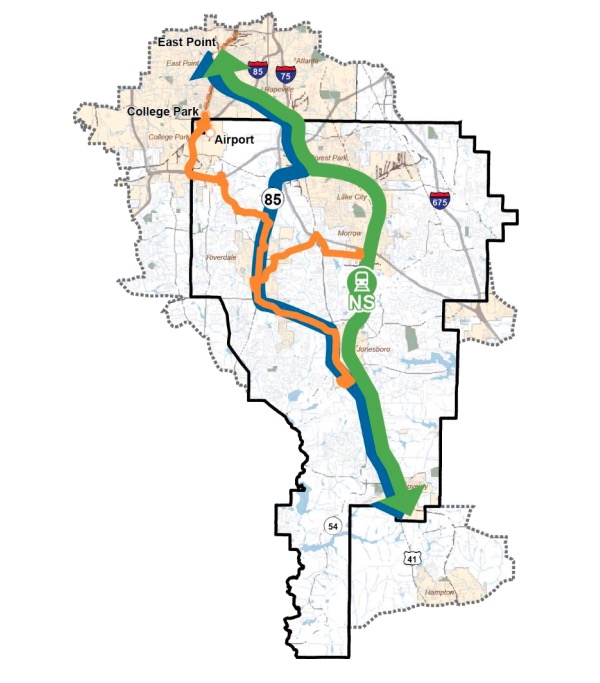 A set of quicker transit routes are set to come through Clayton County as MARTA’s board formally approves a rail line on the south end of its network plus bus rapid transit for other parts of the county.

But rail takes a while to build, cautioned a MARTA board member. 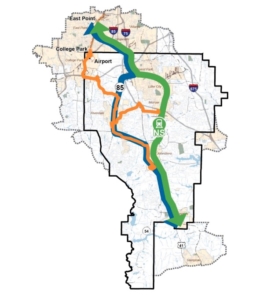 There are a couple reasons why MARTA’s Thursday vote was a big step, according to Roberta Abdul-Salaam and Jerry Griffin, Clayton’s representatives on the MARTA board.

The formal approval of the plan gets MARTA closer to meeting federal requirements for starting physical work on each project; and it gets the agency closer to negotiating with Norfolk Southern, said Abdul-Salaam.

So that’s a bit technical, but what it does is send a signal to the federal government that MARTA and Clayton have made a decision and are serious about doing both projects.

“It’s the first time that we’ve brought in a large group of citizens to work on and look at the thing and sit down and think about it,” said Griffin.

We’re “trying to get to the people who use transit and see what their needs are,” he said. “That’s the whole goal.”

Abdul-Salaam said citizens are still involved and they’ll continue to play a key role in the decisions that are made. 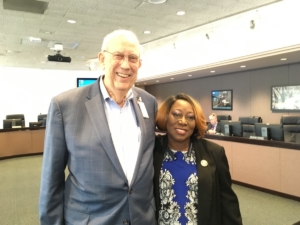 MARTA Board members from Clayton County Jerry Griffin and Roberta Abdul-Salaam, at agency headquarters on Thursday after a board vote on a rapid transit map for their county. Credit: Maggie Lee

Griffin and Abdul-Salaam both were hesitant about putting any timeframe on when a rail line might open — MARTA planners are still in the early stages of work. Even on existing right-of-way, rail is a complex, costly thing to build; a project of many years.

“I don’t want our constituents or customers to actually think that they’re going to walk out tomorrow morning or next week and catch a train,” said Abdul-Salaam.

“Rail is a long-term project,” she said.

So some of the next steps will be for communities around the rail line to start thinking about land use plans, how they might prepare for or encourage transit-oriented development. Abdul-Salaam said she wants Friends of Clayton Transit’s next anniversary event in March to focus on economic opportunities to business owners, potential business owners and citizens.

Clayton County has been a member of MARTA since 2014, when its voters approved a penny sales tax for transit. Part of the deal with MARTA was that Clayton’s pennies would stay in Clayton. Some  of Clayton’s money would go to the bus lines that started running in 2015; but some would go toward a promised, but yet-unknown rapid, transit option.  The vote Thursday morning finalized the plan for that rapid transit option.

A MARTA board committee recommended commuter rail months ago after seeing proposals on several rail routes.

Meanwhile, MARTA’s board is getting a new leader in Freda Hardage. The board unanimously promoted her to from vice chair to chair on Thursday, succeeding Robbie Ashe.

Hardage is the director of foundation services and Alpharetta Medical Campus at Northside Hospital, and was named to the MARTA board in 2015 by the Fulton County Commission.

“These are exciting times for our region,” said Hardage via a written statement. “I look forward to representing our current partners and welcome the opportunity to work with other jurisdictions who want to join MARTA. The growth of transit is vital to the future of our region and I’m excited to be a part of it, as is the entire board.”

Ashe has been MARTA board chair since 2013 and was first named to the board by Atlanta in 2010. And he’ll stay on as treasurer.

That means he’s been chair during some big events in MARTA’s history, like the Clayton vote, Atlanta’s new “more MARTA” tax and expansion, years of keeping the budget out of the red, the passage of a state bill to rework transit governance in Metro Atlanta and the run-up to a 2019 Gwinnett vote on joining MARTA.

Ashe said his years as board chair had been an incredible honor, and that Hardage’s executive experience had already benefitted the agency and would continue to do so.

Board Member William Floyd from DeKalb County was voted vice chairman and Abdul-Salaam will continue as board secretary.