MARTA’s service area may be about to get a lot bigger. That is, if Gwinnett voters decide they want to join. A contract between the two is set to go in front of county voters in March, and the transit agency’s board will consider the same language as early as next month.

That would mean much more bus service soon in Gwinnett, heavy rail some distance into the county to follow; and a penny sales tax initially through July 1, 2057 to pay for it.

Several times, MARTA Board of Directors Chairman Robbie Ashe used the word “historic” as he briefed his board about the contract at agency headquarters on Thursday. 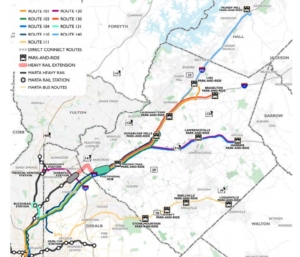 One map from Gwinnett’s transit plan shows the rough location of what would be the county’s first MARTA train station plus some of the bus routes that would run to it. Credit: Connect Gwinnett Transit Plan

Gwinnett came to MARTA with its own very detailed transit vision, said Ashe, after that briefing, referring to the county’s Connect Gwinnett Transit Plan.

“What transit they wanted, and where and when,” Ashe said.

He said Gwinnett and its plan would be a win for the folks of that county as well as people on the rest of the network, giving everybody better access to jobs.

“When we get this done we’ll be able to move from Lovejoy to Lawrenceville without having to take a car,” Ashe said.

Visiting that board briefing table was Charlotte Nash, chairwoman of the Gwinnett County Board of Commissioners. Just the day before, she and her own board set up that public vote on joining MARTA.

“I’m excited to be to this point, never let there be any question about that,” Nash said on Thursday.

Sales taxes in Gwinnett are now 6 percent, counting what goes to the state; most Georgia counties are at 7 percent or more.

If approved by Gwinnett voters, MARTA would take over the county’s bus service and start adding to it within weeks or months.

New heavy rail service would start in fiscal year 2030, according to Gwinnett’s plan, with the opening of a MARTA line extension from the existing Doraville station in DeKalb to a station that would be somewhere around Jimmy Carter Boulevard and Interstate 85.

Those decisions about more rail options, said Ashe, will be made by people who aren’t at the table today, the next cohort of leaders.

The Gwinnett vote is just one example of a lot of transit momentum in metro Atlanta lately. City of Atlanta voters approved a new transit tax in 2016 and may get miles and miles of new light rail and better bus service out of it. The state of Georgia — which has never spent much for metro Atlanta’s transit — this year approved a $100 million bond to help pay for bus rapid transit in north Fulton. 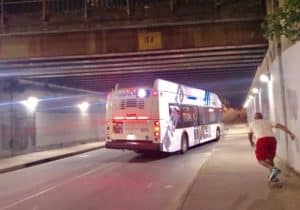 A MARTA bus pulls over to await a rider who’s already using his own form of alternate transportation. File/Credit: Kelly Jordan

Transit questions have taken a lot of Nash’s own time in the last few months — this round of talks with MARTA have long been going on.

And she and others also served on a state House commission that helped write a major redo of regional transit governance which passed this year.

But in a way, MARTA-Gwinnett negotiations far predate anyone who’s in government now. Gwinnett County voters have rejected joining MARTA several times, as far back as 1971.

Several people including local Democrats asked Gwinnett commissioners on Wednesday to call the referendum for this November, when turnout will be higher than it will be than in March.

But Nash said she thinks it will pass any time that it’s on the ballot.

“I think there’s that much pent-up demand for transit options in Gwinnett,” she said on Thursday.

Under the contract, Gwinnett would retain some control over MARTA decisions in the county.

For example, the Gwinnett County Commission would need to approve any MARTA plans to build a major capital project, like a heavy rail station

And compared to MARTA’s decades-old deals with Fulton and DeKalb, the Gwinnett contract has a good bit more contractual reservation of Gwinnett’s funds for service in Gwinnett. In that way, it’s a little more like Clayton County’s 2014 deal, where voters saw  assurances that Clayton pennies would be spent in Clayton.