Metro Atlanta’s transit systems are trimming service and MARTA is asking for aid from the federal government as the new coronavirus upends the economy.

Rail lines will still open at their regular times — about 5 a.m. on weekdays. But trains will run on a weekend schedule, with more time between trains. Due to extremely low ridership, MARTA is closing the Mercedes-Benz/State Farm Arena/GWCC rail station.

And MARTA won’t collect fares on buses. The front doors will be open only to riders who have disabilities and to drivers. For social distance from the driver, everyone else will board by the back door where there’s no fare box.

“While additional operational changes may be forthcoming, we are implementing the … changes to current operations to better protect our staff,” said MARTA General Manager and CEO Jeffrey Parker in a Tuesday press release announcing the cuts. 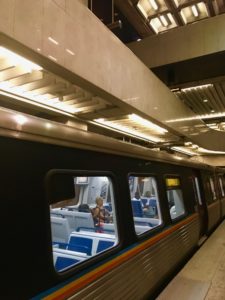 MARTA is also joining other cities’ transit systems to ask for $25 billion dollars altogether as part of the federal government’s massive $2 trillion federal aid package that’ll prop up all kinds of industries.

Congress is moving closer to approving that stimulus package, but as of early Wednesday afternoon, the full text had not been released and it wasn’t clear what MARTA’s share might be.

But if the final federal bill is similar to earlier versions, transit agencies will probably be expected to “rightsize” services to tap the aid: run enough buses and trains that people can keep their distance from each other inside, but don’t run tons of empty vehicles either.

MARTA depends on sales taxes for about half of its operating expenses — to pay staff and keep the trains and buses running. But it won’t be clear until next month exactly how far sales tax revenue, and MARTA’s revenue, has fallen due to COVID-19. Companies’ monthly sales tax numbers will next be due to the state on April 20.

MARTA fares pay for about 30 percent of the operations bill, and ridership is down.

That’s down about 54 percent and 64 percent compared to an average weekday in February.

As of March 23, the Cobb and Gwinnett transit systems had already each cut back cut the daily number of commuter bus trips back and forth from Atlanta.

Gwinnett commuter service ridership was off 72 percent for the week ending March 21 compared to the previous week, or roughly 5,800 fewer passengers.

“So far this week, even fewer appear to be using commuter service,” said Gwinnett County spokesman Doug Nurse in a Tuesday email. So commuter trips are down from 101 to 37 daily.

CobbLinc has seen similar declines. Ridership on Tuesday was down 54 percent compared to the average weekday in February 2020, but it was up nine percent from the day before.

Gwinnett (and Cobb) don’t depend on direct receipt of on sales taxes like MARTA does. The much smaller county systems are funded mainly by a mix of federal funds, county appropriations and fare box revenue.

“The reduction in fare box revenue is a concern but our main focus currently is providing the service and doing so safely for passengers and operators,” Nurse said. “We are keeping track of any fare box revenue declines as well as costs associated with the additional cleaning and other related COVID 19 expenses and will actively seek any available aid to recoup these expenses.”

Gwinnett doesn’t have any further reductions planned, but they’re still evaluating and any updates will be posted at Gwinnett County Transit’s website.