MARTA is again inviting the public to the design table, this time to state their preference for the graphics to be imprinted on the exterior of 254 new rails cars. 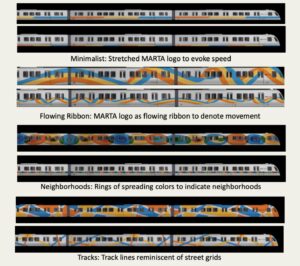 MARTA invites the public to cast votes and offer feedback on graphic designs for the new rail cars that are to start arriving in 2023. (Image of MARTA designs compiled by David Pendered)

A total of eight designs are on the table. The public is to review, vote and give feedback on the eight designs, which are separated into four groups of two and represent different aspects of the transit system:

After the public opinions have been analyzed, the winning concept is likely to be modified before it’s applied to the cars, MARTA General Manager and CEO Jeffrey Parker said after the four concepts were presented during the Thursday meeting of MARTA’s board of directors. One thing that won’t change is the LED lighting if the MARTA name on the front of each car, he said.

This public engagement program is the second phase of the one MARTA used in early summer to gather public input on the interior look of the new rail cars. MARTA is continuing the campaign under the banner of, “Your Ride, You Decide. MARTA Wants to Hear from You, Again!” 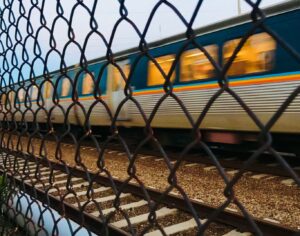 The first new rail car is to arrive in Atlanta in 2023. Final delivery of the fleet is forecast in May 2034. The youngest cars in MARTA’s fleet of 338 heavy rail cars are an average of 18 years and life expectancy is estimated at 30 years, according to MARTA’s capital improvement budget. The new cars are being provided by Stadler with terms in the $646 million contract for an initial order of 254 cars, plus an option to purchase an additional 100 vehicles, according to MARTA.

MARTA’s management determined the earlier exercise in participatory planning was a success. They point to the number of responses and say the public’s opinions contribute to the final design of the interior of rail cars.

Parker said in a statement:

The call for comment on the interior design netted comments from more than 1,300 individuals. They provided 17,000 votes and 700 comments that were analyzed on various components of the future rail cars. The most popular items revealed by the survey are:

To cast a vote and learn more: Visit MARTA’s “You Ride, You Decide” homepage or MARTA’s social media pages; register to provide feedback here; or see one of the MARTA teams that is to be conducting in-person surveys in rail stations.