As MARTA enters a pivotal moment for regional transit in Atlanta, it has launched a pilot program that could radically change how the agency serves riders.

The pilot was designed by Georgia Tech professor Pascal Van Hentenryck, who leads the AI Institute for Advances in Optimization, in partnership with MARTA.

In an hour-long interview in his office, Van Hentenryck shared his views of Atlanta, his thoughts on transit locally and nationally, and how MARTA Reach could become one of the most innovative advances for transit in areas with less density. 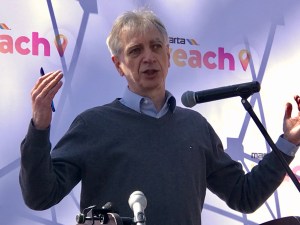 MARTA is launching this six-month pilot program as the agency is facing a difficult transition with its executive leadership as well as having to make critical decisions on whether it will invest in expanding rail or bus service.

Following the tragic death of its general manager and CEO Jeffrey Parker in January, MARTA’s board on March 3 announced that it has named a search committee to identify a new CEO for the agency.

Collie Greenwood, MARTA’s interim general manager and CEO who previously served as deputy general manager for operations, is thought to be a strong internal candidate for the permanent position.

In addition to the transition in leadership, major decisions that will determine MARTA’s future are on the horizon.

Several potential routes for expansion, once thought to be either heavy rail or light rail now are leaning to become routes served by buses — such as bus rapid transit (BRT) or another kind of bus transportation.

Already, MARTA has decided to seek $338 million in federal funding for a BRT line from the College Park MARTA Station to several destinations in Clayton County. Originally, Clayton County joined MARTA (by passing a penny sales tax in 2014) expecting a rail line would connect the county to the regional transit system. MARTA was unable to strike a deal with Norfolk Southern to use the railroad’s existing line or build another rail line on its right of way. 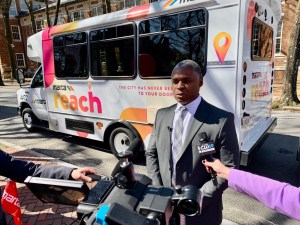 Similarly, the transit line to Summerhill will now be BRT rather than rail. And the idea of running rail in the median of Georgia 400 all the way to Alpharetta has been nixed in favor of a bus solution.

A few facts to consider: Bus is usually cheaper than rail, at least in the short-run. But bus routes don’t spur economic development and real estate investments when compared to rail lines because they are viewed as less permanent. A true BRT system is supposed to look and act like rail with a separate right of way, but more often than not, BRT projects tend to act more like express buses than true BRT.

So, under this backdrop, my conversation with Georgia Tech’s Van Hentenryck helped give me perspective on how the MARTA Reach system fits in with the larger transit landscape.

Van Hentenryck, who was born in Belgium, has been in Atlanta for four years working on the software infrastructure being used for MARTA Reach. He spent 20 years in Rhode Island at Brown University and then several years in Australia and Michigan before coming to Georgia Tech.

“I started working with MARTA almost immediately,” Van Hentenryck said. “The process has been amazing. “MARTA is forward-looking and well organized. They are responsive to new ideas.”

He added the on-demand MARTA Reach service only works if it feeds into a core system with rail or high-frequency buses. 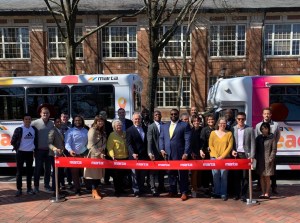 “I love rail. It’s the backbone. We take them to rail,” Van Hentenryck said. “If you had all these expansions in rail, it would be a lot easier for the consumer. The [MARTA Reach] shuttles act as feeders to rail and high-frequency buses.”

Van Hentenryck admitted to favoring investments in rail as part of the overall transit landscape.

“If I had my way, you would have a really strong concentration of core fixed routes, and ideally it would be rail,” he said. “With this on-demand service, you need strong core fixed routes — rail or bus. Then you need a feeder system. If you want to change the dynamic of transit, you have to bring people to transit.”

While Europeans are used to walking 10 to 15 minutes to get to transit, Van Hentenryck said that in the United States, “you lose 90 percent of your ridership, if you make them walk a quarter of a mile.”

That’s why MARTA Reach can pick people up close to where they live or work and be available as an on-demand service.

“You make transit much more accessible, and it works within the budget of MARTA,” said Van Hentenryck of the Reach program, which he hopes will lead to more riders on MARTA. “What I’d like to do is serve the entire MARTA service area.” 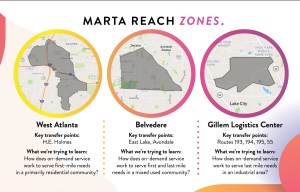 Metro Atlanta certainly has its challenges. MARTA jurisdiction only covers Atlanta, Fulton, DeKalb and Clayton counties — leaving out many business centers and residential areas in the region (think Cobb, Gwinnett, Douglas and Rockdale.)

“Atlanta is a very complicated city. You have multiple job centers — Midtown, downtown, the CDC, Buckhead. There are a lot of reverse commutes,” Van Hentenryck said. “It is a very complex system, but I think we have shown how we can make this work.”

Then Van Hentenryck spoke of  Atlanta as a city with great “potential.” The MARTA Reach on-demand shuttle service could decrease congestion — especially if it were fully implemented and available throughout the system. “It’s the only thing that makes sense,” he said.

During the event launching MARTA Reach, Collie Greenwood said that if the pilot is successful, it could be incorporated in MARTA’s overall bus network redesign. “MARTA Is undergoing a reimagining of our bus network,” Greenwood said.

Van Hentenryck said the shuttle service could be more cost-effective than running empty or nearly empty buses on certain routes.

Then Van Hentenryck offered some thoughts about the system-changing decisions in MARTA’s future:

“There are many pieces to the puzzle,” he said. “Ideally, it would be useful to have rail. BRT and buses can be an intermediate step. BRT can be a transition mode. BRT is not necessarily bad if later you can transition it to rail.” 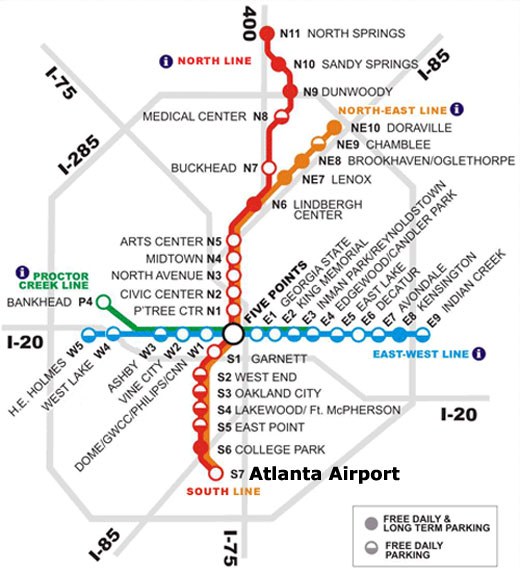 A map of MARTA’s rail system shows gaps in areas that are underserved by rail transit. (Special: MARTA.)

Previous Article
Ukrainian resolve on display in 1996 Summer Olympic Games in Savannah
Next Article
The Social, Emotional and Economic Impact of COVID on Women