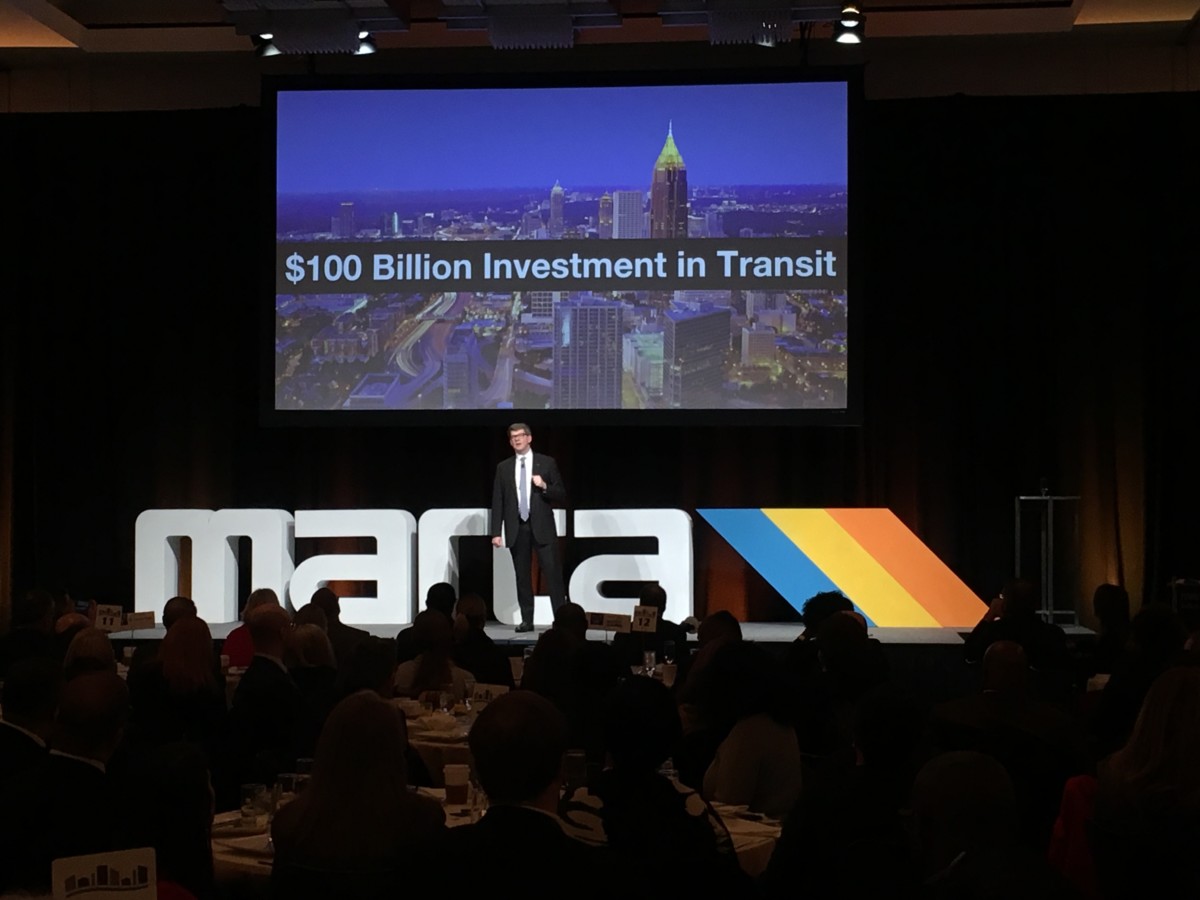 With an audience of elected leaders from all over metro Atlanta and beyond, MARTA’s leader said the region needs to have a “big goal” as it looks toward the next 40 years of transit. 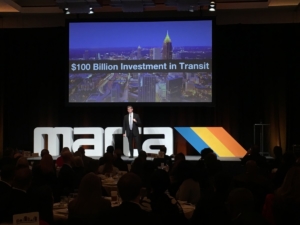 Jeffrey Parker, general manager and CEO of MARTA, said on Friday at the annual “State of MARTA” breakfast that metro Atlanta should spend $100 billion on transit infrastructure and technology over the next 40 years. Credit: Maggie Lee

“Over the next 40 years, metro Atlanta should have the goal of investing $100 billion in transit and technology,” MARTA General Manager and CEO Jeffrey Parker said at the annual State of MARTA breakfast on Friday morning.

“We need $100 billion to transform for our future, to profoundly transform mobility and ensure that metro Atlanta can continue to grow into the world-class region we all want,” he said, calling that a moon shot effort.

He made the comments as he showed a graph depicting metro Atlanta’s rising population, and a photo of gridlock on the Connector.

Parker did not unveil any new map or talk specifics about what modes should go where — that’s not exactly MARTA’s decision anyway. MARTA is one transit agency among many, it only operates in three metro counties and it leans on local governments to figure out the broad outlines of what’s best for each community.

But MARTA is the biggest transit agency, it’s the only subway operator, and what its leaders say will carry a lot of weight in the region.

“Some will say that [$100 billion] is probably too big and too bold and that we can’t do it and that we should just focus on what’s in front of us today. But we must do both,” Parker said.

Setting aside inflation, $100 billion per year for 40 years would come to $2.5 billion in transit and technology spending per year across maybe a dozen counties, depending on how “metro Atlanta” is defined.  And if that future spending is anything like transit spending now, the money will come from a lot of places: fares, local sales taxes, federal grants, and maybe some money from the state of Georgia.

But for a little context, consider what those squiggly lines on transit maps cost: Gwinnett is considering joining MARTA and paying for an extension of heavy rail into the county, a line linking Doraville station to somewhere in the vicinity of Jimmy Carter Boulevard and Interstate 85. According to the estimates in Gwinnett’s transit plan, capital costs alone on that four- to five-mile line would come to about $1.16 billion.