MARTA may be turning from ‘What now?’ to ‘What’s next?’

MARTA may be entering the phase where the question turns from, “What now?” to “What’s next?” Especially in light of MARTA’s responsibility to enable social distancing on trains and buses. 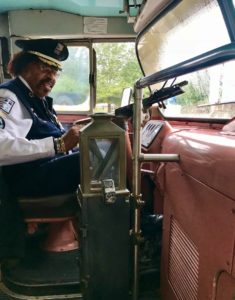 MARTA buses provide no more barrier between the driver and passengers than existed on this vintage bus. Credit: Kelly Jordan

Last week, MARTA reported its first virus-related employee death – a custodian at the Decatur Station. On Sunday evening, MARTA reported 25 employees had reported testing positive for COVID-19; 159 employees were notified and sent home for quarantine and monitoring under their care of their own medical provider, according to a MARTA report.

MARTA this week begins facing an unknowable user demand as the economy begins to reopen. Untold at this point are any specific requirements for MARTA to provide space for social distancing – and with it a lot of vacant space on buses and trains. Passengers already are ignoring social distancing guidelines and overfilling buses. MARTA reports it is sending police officers to assist with overcrowding, escort joy riders off buses, and respond to drivers who call for help.

On the national level, the Amalgamated Transit Union has all but stopped its calls for greater safety measures for transit employees. ATU does provide a list of all deaths of union members.

Representing transit operators, the American Public Transportation Association is turning its attention to how to pay for future service and expansion when revenues are forecast to plummet during global economic slowdown.

The deceased MARTA employee, Derrick Ferguson, was 53 when he died on April 20. Ferguson died seven days after he notified MARTA that he’d tested positive for COVID-19. April 10 was his last day at work, according to MARTA.

No obituary or record of a presence on social media is immediately apparent. Ferguson left behind two daughters, one son, eight grandchildren, and a partner – a woman who works for MARTA, who was diagnosed with COVID-19, and is recovering at home, MARTA said in a statement last week. 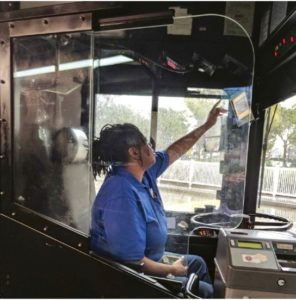 A barrier was installed between the bus driver and passengers on 222 buses in St. Petersburg, Fl. The barriers cost $1.2 million and funding was approved in 2019. Credit: APTA, ‘Passenger Transport’

Ferguson was a custodian at the Decatur Station. His job was to empty the trash and mop up spills. He also would have meandered through crowds of passengers to sweep up debris that riders drop or otherwise gathers, work that would have placed him within 6 feet of passengers. MARTA notified four coworkers of his illness and advised that they self-quarantine.

MARTA’s COVID-19 protocol is to report cases of MARTA employees that have been confirmed by public health authorities or an employee’s medical provider. Cases involving contractors and the general public are not included in the report.

In terms of the financial future of transit nationwide, APTA rang the alarm bell in the April 20 edition of its Passenger Transport. A commentary by the CEO of Seattle’s transit system, Peter Rogoff, observes under the headline: Funding Public Transit to Spearhead Post-Coronovarius Recovery:

This new scenario arrives as MARTA already has been recording ridership below forecast since at least December 2018. 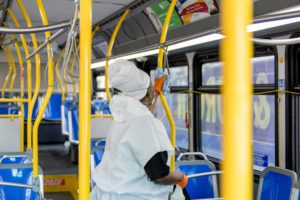