MARTA's incoming police chief, Scott Kreher, will oversee a department of officers who are fully sworn and certified under the Georgia Police Officer Standards and Training Council. Credit: facebook.com/martapolice

MARTA’s incoming police chief is a former president of Atlanta’s police union who ascended to become the department’s deputy chief in a 26-year career that spanned squads that fight crimes including human trafficking, robbery and street-level drug dealers. 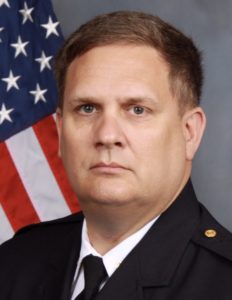 Scott Kreher is to take office March 9 as MARTA’s chief of police and emergency management. Kreher previously served as deputy chief of the support division for the Atlanta Police Department.

Kreher arrives at MARTA at a time the rates of violent and property crimes have been tracking downward, according to figures tracked by the Federal Bureau of Investigation. The data is reported to the FBI by MARTA. MARTA officers are fully sworn and certified by the Georgia Peace Officer Standards and Training Council.

A 10-year analysis available from the FBI shows the following: 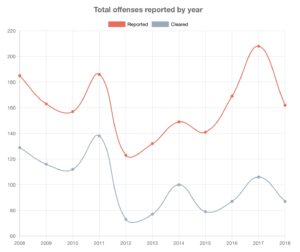 The rate of violent crime reported to the FBI by MARTA trended downward in 2018. Credit: crime-data-explorer.fr.cloud.gov

Kreher is to report directly to Wanda Dunham, MARTA’s previous police who was promoted in 2018 to serve as MARTA’s chief of system safety, security and emergency management. Dunham said of Kreher’s appointment: 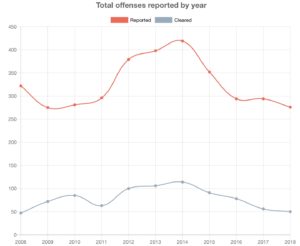 The rate of property crimes reported to the FBI by MARTA have trended downward in since a recent peak in 2014. Credit: crime-data-explorer.fr.cloud.gov

Kreher is known to not flinch from stating his opinions on public safety and the treatment of fellow officers. Kreher took on then Mayor Shirley Franklin in 2009, when he served as president of the local chapter of the police union, International Brotherhood of Police Officers.

Kreher spoke at a 2009 budget hearing before members of the Atlanta City Council. Kreher was protesting what was some officers viewed as an unofficial city policy that to ignore requests for compensation filed by officers injured in the line of duty.

Kreher was suspended following his remarks about Franklin, which were reported multiple media outlets, and by an online petition seeking his reinstatement:

CNN covered the situation and reported this comment from an officer injured in the line of duty:

Kreher apologized in a statement published on IBPO’s website, according to the petition. Kreher later passed a mandated psychological review and was reinstated. 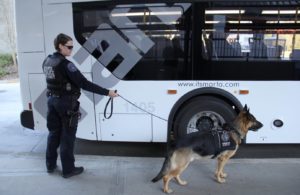 MARTA’s incoming police chief, Scott Kreher, will oversee a department of officers who are fully sworn and certified under the Georgia Peace Officer Standards and Training Council. Credit: facebook.com/martapolice