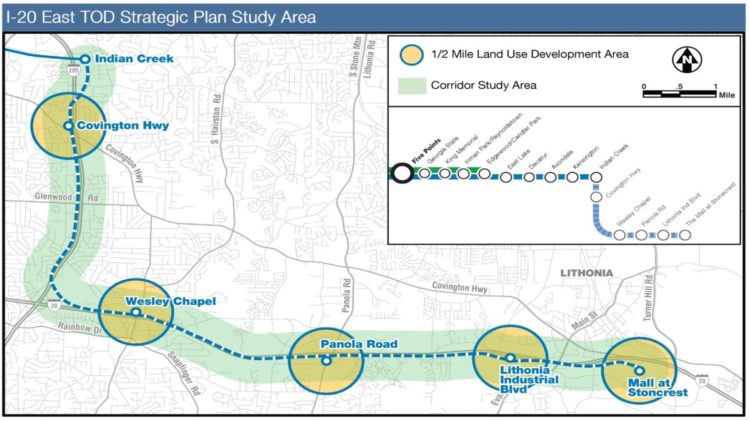 The current $2 million study is to evaluate the type of mixed used developments that could be built near potential rail stations on a proposed MARTA rail line to serve East DeKalb County. Credit: MARTA

Planning for MARTA to build a heavy rail line from the Indian Creek Station to the Mall at Stonecrest continues and, in early November, the public will have a chance to learn about – and give their input on – the shape of potential development around possible rail stations. 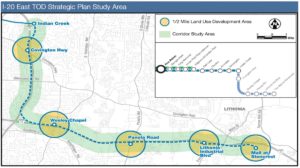 The current $2 million study is to evaluate the type of mixed used developments that could be built near potential rail stations on a proposed MARTA rail line to serve East DeKalb County. Credit: MARTA

MARTA and the DeKalb County government are jointly hosting two listen-and-learn sessions, on Nov. 8 and Nov. 9.

The government’s review is funded with a $1.6 million grant awarded to MARTA by the Federal Transit Administration. MARTA and DeKalb provided additional sum that totaled of $400,000 to fund the analysis of potential development along an eastern rail extension.

This project has nothing to do with the proposed MARTA extension into the areas surrounding Emory University and the Centers for Disease Control and Prevention. The extension to Emory has been tied to the proposed annexation of the Emory area into Atlanta. The Atlanta City Council is expected to wait to vote on the proposed annexation until after the general election on Nov. 7. The council is expected to vote on the Emory proposal this year.

The purpose of the meetings in November is for MARTA and DeKalb County to share information with the public about the type of developments that could be built near the rail stations along the proposed rail extension. The extension would total 12 miles, according to the FTA grant award.

The general parameters of the transit line have been established – between the existing Indian Creek Station and a proposed transit station near the Mall at Stonecrest. 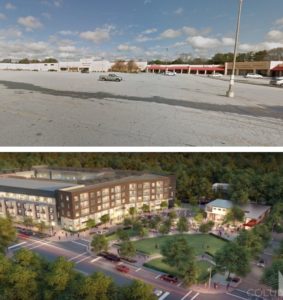 A potential MARTA rail station on Covington Highway in Decatur (top) could be retooled into a mixed use development similar to one being built at MARTA’s Edgewood/Candler Park Station. Credit: MARTA

Here’s how the joint fact sheet describes the topic to be discussed:

Those who attend the meetings will have an opportunity to register comments. However, the comments are considered informative will not carry the legal weight of comments gathered at a public hearing.

The final report that is to result from input from citizens, elected officials and other stakeholders is to help influence plans for the development expected to surround the transit stations. According to the fact sheet on the I-20 TOD study:

For about two decades, planners have been evaluating the potential to extend MARTA service into East DeKalb County. Both heavy rail and streetcar-like light rail have been evaluated. Credit: MARTA

If the subject of the meetings sounds familiar, that’s because it is familiar. For nearly 20 years, plans have been in the works to extend MARTA service into east DeKalb County and for the service to spur development and walkable communities.

The most recent proposal was a dedicated bus line along I-20 from Downtown Atlanta to the Stonecrest area. Funding for the concept died in 2012, when metro voters rejected a proposed sales tax for transit and transportation improvements.

The initial studies of East DeKalb were started around 1997 with funding obtained by then U.S. Rep. Cynthia McKinney, who represented the 4th District portion of DeKalb. McKinney secured a federal grant to study a potential route from South DeKalb through the Emory University area and on to MARTA’s Lindbergh Station. At the time, the thought was to install a system of light rail, a technology that is similar to the Atlanta StreetCar.