By The Wilbert Group

We spoke with Sheba about what fuels her passion for architecture, her multi-cultural heritage, and her involvement in ULI beginning with YLG to chairing this year’s Center for Leadership 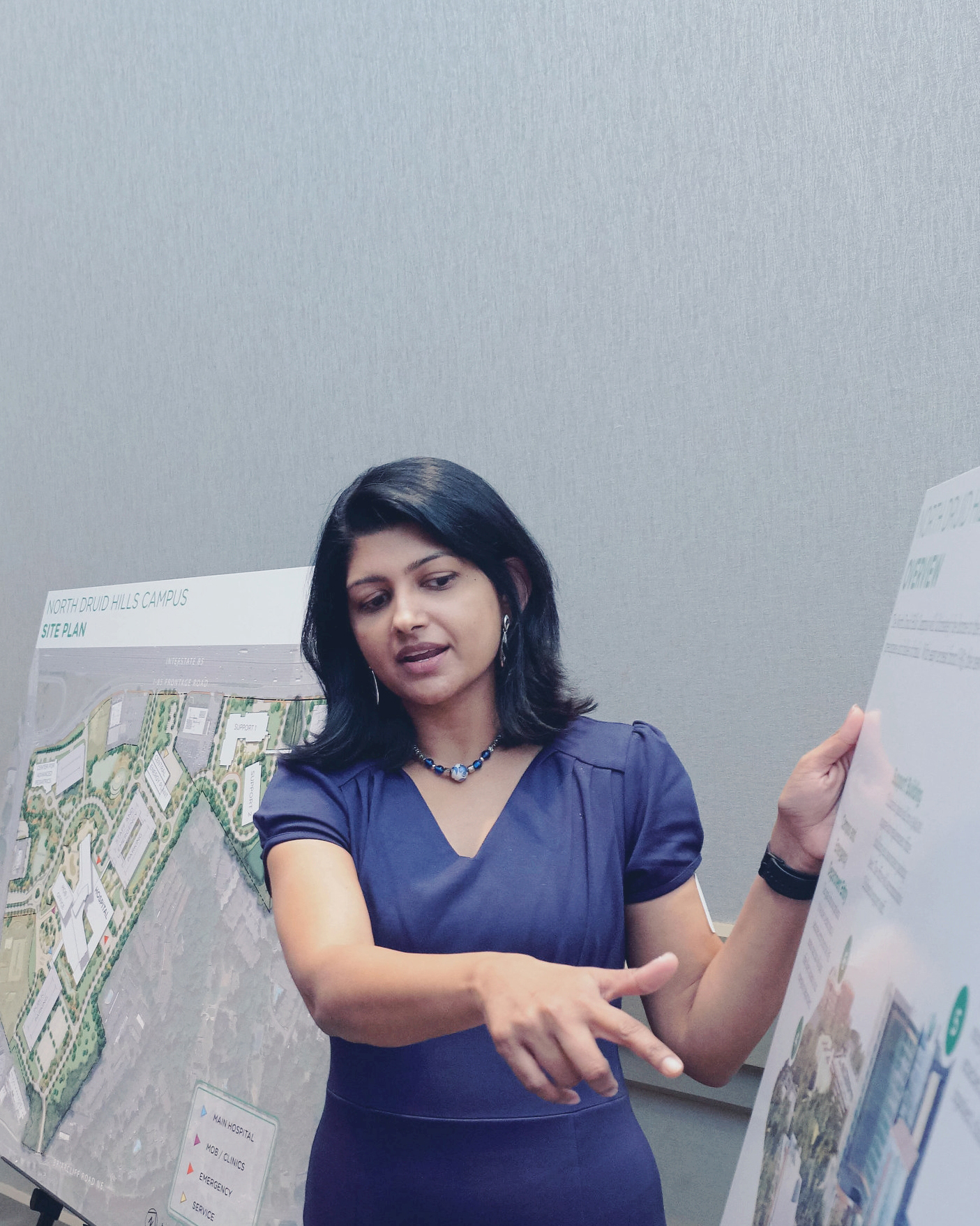 In 2016 urban designer Sheba Ross was part of a team at HKS designing the new building for the Piedmont Hospital campus in Buckhead. The HKS team met with the hospital system’s leadership team regularly, and CEO of Piedmont Atlanta, Dr. Patrick Battey, would start by sharing a “promise story.” It was about something that had happened at the hospital in recent days, such as a life being saved amidst complex conditions.

It reminded the team that their role as designers was about more than a building; it was about creating a healing place for the community. Because the team stuck to schedules and planned costs, the new building opened in April 2020, well ahead of the planned August date. That meant the hospital could provide more important care at the earliest stages of the COVID pandemic.

In addition to the early opening, Ross is particularly proud of the terraced plaza at the corner of Peachtree Road and Collier Road. It is “intentional and welcoming … it is a place for people to catch their breath,” she said.

Ross says it is a win when nurses and other healthcare workers can enjoy a break and fresh air. “People sometimes see architecture as an iconic statement, but it is about more than that,” she said. It is the way people use and interact with the space.

Ross was born in Ethiopia and grew up in southern India. She grew up travelling internationally. She said both “rural and urban experiences reminded me that there is power in the space between buildings… that’s where community happens.”

Her mother encouraged her to pursue a degree in architecture because of her interest in creative tasks. She graduated from Anna University in India and then moved to the United States to study urban design at the University of Colorado at Denver.

She knew nobody in the city and was unaccustomed to cold weather. However, on the first day of class, a professor took the class to the 16th Street Mall, a pedestrian street designed by I.M. Pei & Partners, and talked about how thoughtful urban design strategies had changed the way people engaged with each other. “I was hooked,” she said. “For me, it was life-changing.”

Twenty-one years later, she loves the work more than ever. “My passion aligns with my purpose,” she said. “This is not something I take for granted. I love what I get to do. I was made to do this.”

A challenge she has had to navigate in her career was when she first became a mother. While her commitment to her profession did not change, it was not perceived that way. But joining HKS changed that. “Because HKS allows me to be myself, they get the best of me. I am unapologetic as a mom, but I also sincerely care about the communities we serve through our projects.”

Speaking of motherhood, Ross first got involved in ULI when she came back to work after her second maternity leave. She was selected for the Young Leaders Group in 2013. She was paired with mentor Monte Wilson of Jacobs and they met every month. She attributes many of her impactful professional choices to Wilson. “He gave me tools no book can give you, and very pointed advice,” she said.

She later got involved in the Center for Leadership (CFL) and the mTAP program, eventually chairing both. Ross was chair of mTAPs during the onset of the global pandemic and talks about pivoting the program from in-person to virtual in a thought leadership piece. Her mantra became “Pencil in your plans. Write your vision in ink.”

Additionally, last year, ULI Atlanta’s Women’s Leadership Initiative (WLI) named her to the inaugural cohort of the top 24 influential women in real estate and land use in the city, The Leaders.

Ross has now stepped into a larger leadership role as current chair of this year’s CFL class. She has many goals for the class, including for members to be able to craft a three-word leadership message for themselves (her own message is “Make Them Matter”), learn about resiliency for leaders and be inspired to make “incremental differences in the real estate realm to trigger meaningful change.” She is trying several new things for the class, including a program day focused on ESG (Environmental, Social and Governance) since Ross believes that there is no better time than now to further our ethical and sustainability impact.

Ross said, “Being a member of ULI has been a gamechanger not just for my career, but also for my life. Because as an immigrant from Chennai, India, it was not until I started volunteering here that I got comfortable calling Atlanta my home.”

When she is not working or participating in ULI programs, she enjoys singing, graphic design, writing and spending time with her husband and two children. She and her husband write songs together, and she is teaching herself to play the piano. She also volunteers at her church as a Sunday School teacher and at the local elementary and middle schools through their STEM programs to introduce architecture and urban design as a career choice.