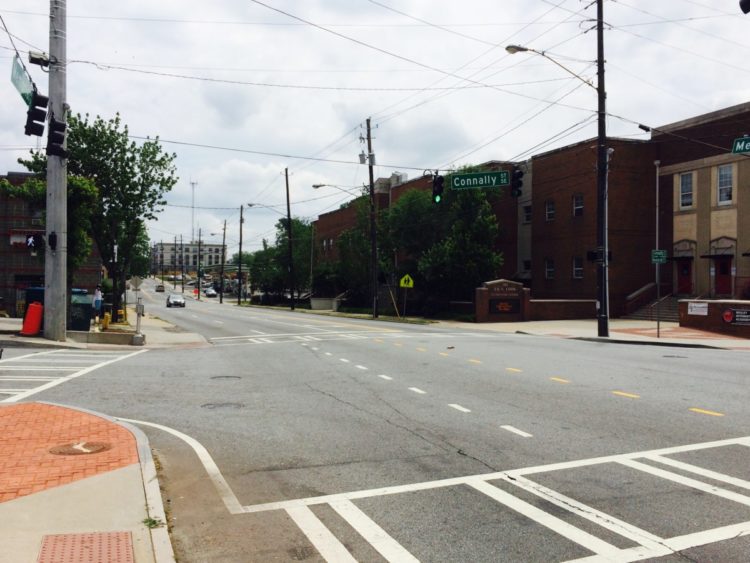 The intersection of Memorial Drive and Connolly Street is the starting point for Atlanta's effort to improve travel along the urban corridor. Credit: David Pendered (2015)

Atlanta is moving forward with an ambitious program to improve the safety of cyclists and pedestrians as they interact with vehicles along burgeoning Memorial Drive. The project starts about a half-mile east of the state Capitol and extends about a quarter-mile. 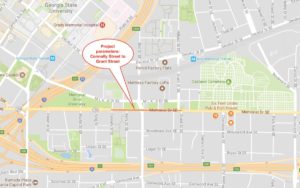 The city notes from the beginning that this is an ambitious project. It involves retooling an urban highway that’s flanked by dense development. The project extends 0.26 miles, between Connolly and Grant streets.

The request for proposals the city released Oct. 6 make the challenges plain: If this location proves to be too complicated to retool, the consultant is to identify another stretch of Memorial Drive that could be retrofitted. 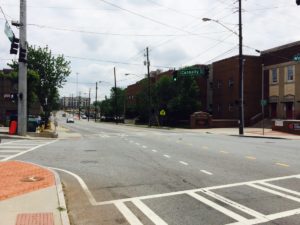 The intersection of Memorial Drive and Connolly Street is the starting point for Atlanta’s effort to improve travel along the urban corridor. Credit: David Pendered (2015)

One major development the project passes is The Leonard, an apartment complex. The price of a one-bedroom apartment starts at $1,230 a month. The project ends before designers would have to grapple with high traffic destinations that include Ria’s Bluebird and Six Feet Under Pub & Fish House.

The overarching goal is to, “facilitate safer travel conditions for automobiles, cyclists and pedestrians, while improving pedestrian/cyclist access to transit, restaurants, residentials spaces and schools within the area,” according to the RFP.

Specific aspirations include a final design that involves:

The RFP does not reflect the recommendations of the Imagine Memorial framework plan developed in 2014. Georgia Tech and Atlanta City Councilmember Natalyn Archibong partnered to devise a visioning document that was overseen by Mike Dobbins, a Georgia Tech professor of practice and former Atlanta planning commissioner.

Dobbins suggested when the report was released that the city and state could use the students’ plan to avoid the cost and time of professional consultants.

Such a course of action is feasible because the report complies with criteria to be adopted into the city’s Comprehensive Development Plan, and by the Atlanta Regional Commission as a precursor to applying for money to help fund the corridor’s redevelopment, Dobbins said.

The Imagine Memorial plan, developed by students in Tech’s School of City and Regional Planning, devoted most of its attention to sections of Memorial Drive that are more prone to collisions than the segment that’s soon to be reviewed.