Mental health episodes are ending in Georgia jails. The state Legislature may make some changes.

Georgia jails are often doubling as the official response to peoples’ mental health crises. It’s not a good situation for anyone.

It wasn’t right for a woman who was arrested for darting in and out of traffic on Tara Boulevard, in Democratic state Rep. Sandra Scott’s district.

“To save her life, and to save other peoples’ lives … they had to arrest her,” Scott said. “They had to find a way to find her a criminal charge so she could receive help, and that’s not what they should be doing.”

Too often, neither the cops nor anybody else has a good option when somebody is experiencing a mental health episode that drives them to doing something dangerous.

Some charge or other may keep a person in jail a day or two — but it doesn’t do anything to prevent the same episode happening again. And again. Georgia House Democrats took up the topic in an online town hall last week.

People are literally being criminalized for having mental health episodes, Georgia NAACP president James Woodall said at the virtual meeting.

“And so now [the person] becomes a product of a very unjust and racist criminal legal system,” Woodall said.

In the worst cases, mental illness plus jail dereliction amount to a death sentence.

Tynesha Tilson has watched the 2018 video of her 22-year-old son Shali Tilson dying of dehydration in a Rockdale County jail cell. She said he’d been going through a mental health episode. He suffered from bipolar disorder and schizophrenia, according to the family, and as documented in a grand jury finding.

The young man was in custody for misdemeanor disorderly conduct and on suicide watch. He was supposed to get a check-in every 15 minutes. The sheriff’s office itself admitted that a deputy falsified the suicide watch log.

There are some ideas for improvement, in counties and at the state level. 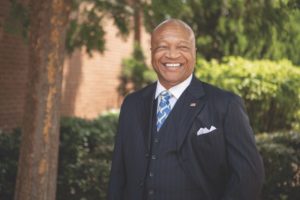 Up in Cobb County, Craig Owens is literally the new sheriff in town, which means he’s now in charge of a jail that’s been notorious as site of 10 inmate deaths in the last year and a half.

Things are going to be different and the Cobb jail isn’t going to do what it’s done before, Owens said at the online forum, speaking from his office.

He’s hired a new jail commander, is working on recruiting more staff and has changed investigation policy. He’ll call in the GBI to investigate any future jail deaths.

At the state level, some kind of legislation will be coming in about two weeks or so, said state Rep. Dave Wilkerson, D-Power Springs, host of the forum. He’s planning some more forums in the meantime for a deeper dive on mental health care policy.

There’s reason to believe that the Republican-dominated state Legislature and Democrats could find common ground.

Sheriffs, whether in a red or blue county, have no interest in booking the same people over and over and over for behavior that’s driven by a medical condition rather than criminal intent. And nobody wants to run a jail staffed by deputies who falsify logs, or that attracts lawsuits or GBI attention.

A bipartisan group of lawmakers and others joined a legislative study committee from 2019 on behavioral health reform and innovation.

Their 2020 report has a section on law enforcement. It suggests help for sheriffs in the form of money to pay for things like psychotropic medication costs, contracts with mental health providers, crisis intervention training and more.

But there’s also a glimmer of something different: consider implementing a pilot model where mental health professionals are teamed with law enforcement officers to go out on mental health-related 911 emergency calls.

The state House’s ranking Republican, Speaker David Ralston of Blue Ridge, called it out in a speech opening the legislative session earlier this month. Georgians, Ralston said, “expect us to quit treating mental health as less than what it is: a serious, widespread and crippling problem that touches the lives of most every family in Georgia.”

However, any changes will be tough in the next couple of months. The state Legislature is in session, but the pandemic may do two major things: cut the session short, and drive lawmakers to keep money in the bank for a rainy day.