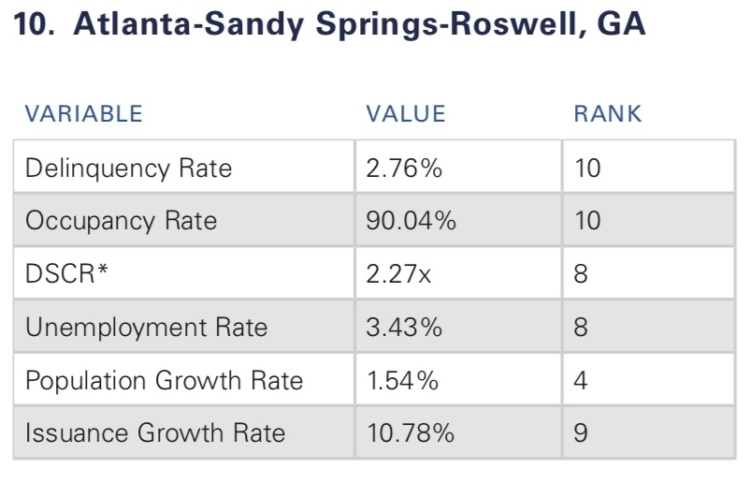 The delinquency rate has improved from nearly 20 percent in 2012 to just under 3 percent in November 2018, according to a report by Trepp. Credit: Trepp

Metro Atlanta ranks 10th out of the nation’s top 15 metro regions for investment potential in commercial loans, according to a new report by the industry watcher Trepp. In a small way, the bankruptcy of a popular bicycle business with four shops in the region shows why metro Atlanta isn’t ranked higher.

The good news, in terms of regional bragging rights, is that Charlotte didn’t make the list of the 15 largest metro areas.

Trepp analysts indicated they may have been a bit puzzled by the 10-place ranking of Atlanta’s Metropolitan Statistical Area, given the strength of a basket of economic indicators. Trepp’s rankings track commercial mortgage backed securities, which are loans on commercial properties. These loans are backed by mortgages on commercial properties, just as residential loans are backed by mortgages on homes. 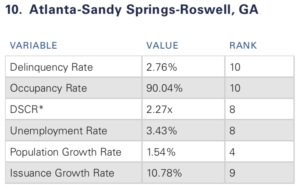 The delinquency rate in metro Atlanta on commercial mortgage backed securities has improved from nearly 20 percent in 2012 to just under 3 percent in November 2018, according to a report by Trepp. Credit: Trepp

CMBS are used to finance all types of commercial properties, including retail centers. This is where the softness in the retail sector can impact a region’s CMBS portfolio. Consider the case of Performance Bicycles, which the company reports was started in 1981 by a doctoral candidate in finance as a catalogue company.

In metro Atlanta, Performance Bicycles has long been an anchor in the region’s cycling community. The four shops in the metro area were regarded for hosting of bike rides for pleasure or training; for their fairly comprehensive inventory of bikes, components and parts; and for the skill of mechanics to keep bicycles at their best for riding roads or mountain trails.

That’s when the bike shop’s parent company filed for bankruptcy in Durham, N.C. as part of a reorganization strategy. Assets were valued at no more than $10 million and liabilities were estimated at up to $50 million, according to a report by bankruptcyobserver.com.

The parent company, Advanced Sports Enterprises, Inc. announced store closing sales at each of its 102 of its bike shops, according to a report by Gordon Brothers, a liquidating company. The list includes Performance Bicycle shops in Atlanta, Buford, Marietta and Roswell.

Eventually, the chain store will relinquish its floorspace. And that space will again be on the market at a time Trepp reminded in another statement of the pending store closures announced by two giants in the commercial real estate arena – Sears and Kmart.

On Tuesday, Sears filed paperwork to close a warehouse near Scranton, Pa. eliminating jobs for 121 workers, some of whom had worked there 27 years, according to a report by citizensvoice.com. In December, Sears announced the pending closure of a warehouse in Jacksonville, Fla., according to the same report. The company does not appear to have filed in Florida last year a WARN notice stating the number of jobs to be eliminated. 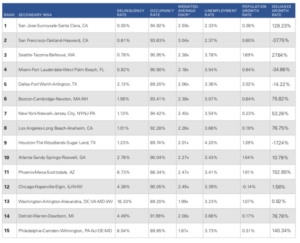 Analysts with Trepp indicated they were puzzled that metro Atlanta didn’t rank higher on a list of the 15 largest metro areas in the U.S. being eyed for investments in commercial mortgage backed securities. A basket of mesurements indicate the region has recovered more fully from the Great Recession. Credit: Trepp