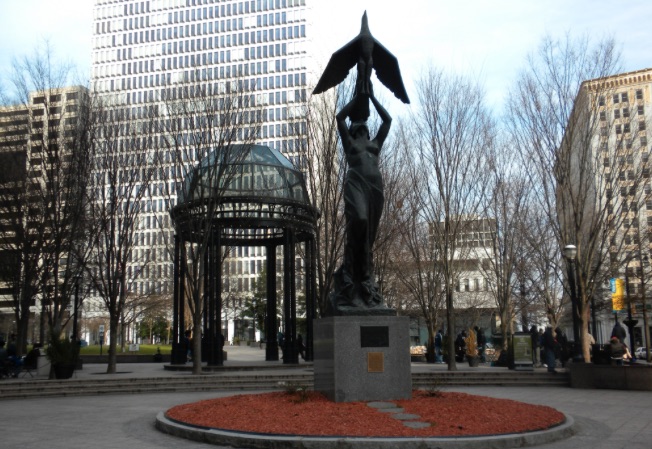 Given that Atlanta’s symbol is the phoenix, it’s only natural that the region’s latest economic development plan begins by emphasizing the worst. Implicitly, the plan calls on the “can do” attitude of locals to fight back from wrack and ruin.

The five-year Atlanta Metro Export Plan was released last week after a year of research conducted with help from the Global Cities Initiative, a joint project of Brookings Institute and JPMorgan Chase. Participants include Georgia Department of Economic Development; Office of the Mayor of Atlanta; U.S. Export Assistance Center; JPMorgan Chase; UPS, metro Atlanta regional economic development partners; and the Metro Atlanta Chamber, according to the full report.

The opening of the first chapter of the MEP states:

Readers who haven’t had their wind knocked out by that opening continue to the second segment: 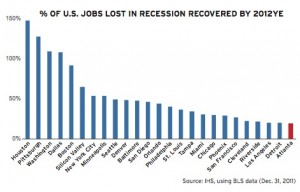 Metro Atlanta trails other cities in the recovery of jobs lost during the great recession. Credit: Metro Export Plan

Thankfully, the plan provides a glimmer of hope in the next segment: “The Path Forward.” However, the plan offers no false hopes that the path will be easy, and suggests that companies that don’t boost exports can expect to stumble: 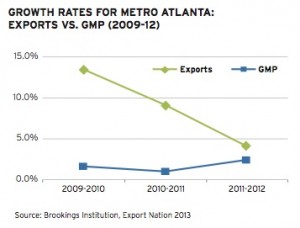 Growth rates for exports from metro Atlanta began plunging after the great recession and have not recovered. Credit: Metro Export Plan

After diagnosing the region’s economic ills in the first three pages, the report provides a market assessment that contains equally distressing nuggets such as:

Just when things can’t get worse, they don’t.

The report shifts into its “phoenix” phase. Atlanta adopted the phoenix as its symbol in 1888, aligning itself with the mythical bird that burns with its nest, only to arise from the ashes as a young bird. The image seemed fitting to civic leaders, who adopted it two decades after the Civil War. 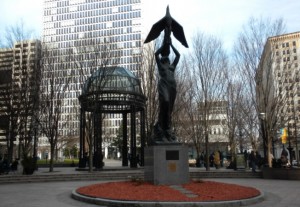 A new five-year, economic development plan for metro Atlanta portrays the region’s economic vitality as similar to the era when civic leaders adopted the mythical phoenix as Atlanta’s emblem, for it’s ability to rise from its ashes. Credit: pinpicsnow.com

The next six pages of the 16-page report outline a game plan to boost the export of goods and services to foreign lands. There’s a lot of work to be done. The report pays a good bit of attention to marketing and messaging – Atlanta’s proven strategy of setting outlandish goals and striving hard to meet them.

Just as the report harkens back to the phoenix, it doesn’t miss an opportunity to mention the 1996 Summer Olympic Games. Early the report, readers are reminded that the region can do better than the lower rungs of the nation’s economic ladder:

The goal is a declarative statement:

The ongoing work to implement the plan is to be coordinated by the Metro Atlanta Chamber’s Office of Global Commerce. The chamber is to have assistance from an advisory board and an unspecified number of working committees.

Previous Article
Dear Taxpayer: We’ve lost your identity
Next Article
It was a dangerous place to be and everyone knew it