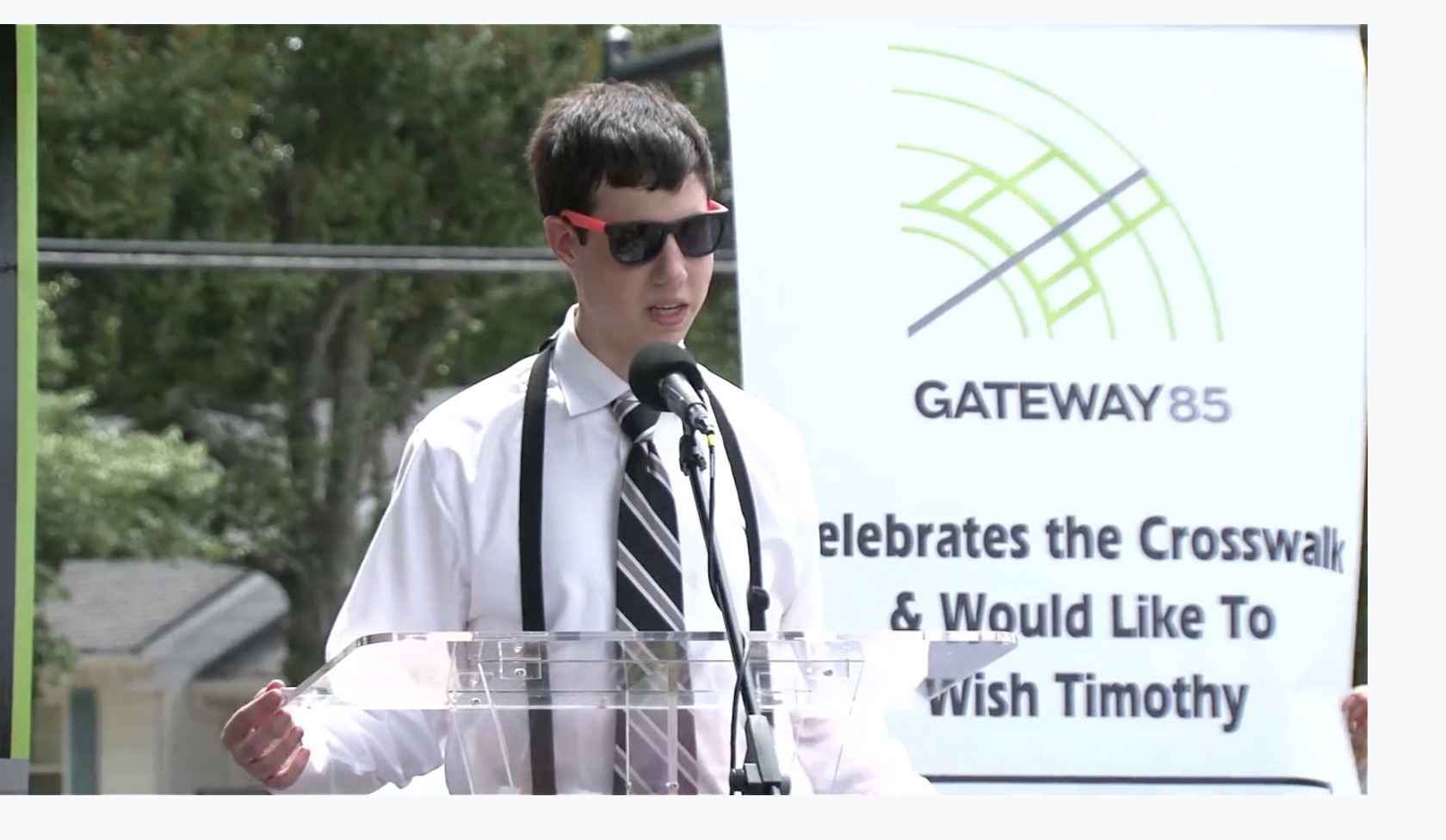 It’s a simple story from a simpler time. A mother asked a man to help her blind son. The man agreed. An audible tone was added to a crosswalk on a busy road. The son now can safely cross the road between his home and a bus stop after his ride home from school. 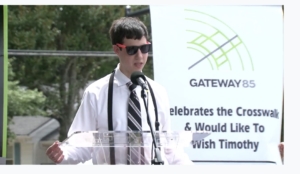 Timothy Jones is a blind musician whose commute to Georgia State University will be safer because of a crosswalk alert funded by Gateway85 CID. Special to SaportaReport

Nancy Jones is the mom who reached for help and found the willing hand of Robert Michener. Tim Jones is the blind son who will be able to safely access a bus stop for his trips home to Norcross from Georgia State University, where the organist is enrolled in a masters degree program.

The audible alert was installed on Beaver Ruin Road, a busy road that connects Buford Highway with I-85. The alert was activated Tuesday, which coincidentally was Tim Jones’ birthday.

Tim Jones referenced the notion of simpler times when he inaugurated the new automated cross walk signal. But first, he acknowledged in his remarks others who face similar mobility challenges.

“Thank you all for such a wonderful response to the needs of the blind community,” he said. “Norcross has always been a city that cares about its people and, in many ways, it reminds me of Mayberry in the Andy Griffith shows.”

Michener described the conversation that led to the installation of the audible alert as the result of one of those chance moments. He serves as the operations director for the Gateway85 CID, the community improvement district where commercial property owners pay an extra tax for improvements in southwest Gwinnett County. Gateway85 was already helping with mobility improvements along Beaver Ruin Road. That included a planned crosswalk. Michener was out inspecting the project when he was approached by Nancy Jones.

“This came about by happenstance,” Michener said in a statement. “We had identified the need for the crosswalk on the very busy Beaver Ruin Road because of the church, the school, and the many apartment communities located within that area. 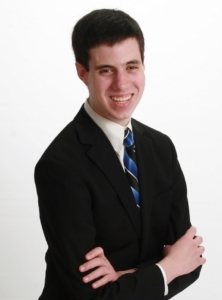 Tim Jones has been blind since birth and has enrolled in a masters program at Georgia State University, after earning a bacherlor’s degree in organ from Mercer University. Special to SaportaReport.

“As project manager, I was out to inspect the progress when I was approached by Timothy’s mother,” Michener said. “She asked if the system was audible. It was not.”

Michener returned to the office and made the appropriate inquiries.

Emory Morsberger was one of those contacts. Morsberger is sensitive to those with special needs and supported the installation and the additional cost of $15,000 for the audible alert on a larger project paid for with state and county money. Morsberger’s served as executive director of Gateway85 since April.

“This is the kind of thing we do,” Morsberger said in a statement. “We are always on the lookout for projects to improve traffic, landscaping, reduce crime, and improve the overall quality of life while promoting economic development in the district.

“Helping this young man continue to pursue his dreams in teaching blind children to play the piano required an extra effort we could not turn down,” Morsberger said.

Nancy Jones, of course, is delighted by the turn of events that will help her son continue his course toward a music career in which he’ll help potential players learn to read music in Braille.

“We are so proud of Timothy’s ambition and courage to live an independent life with many awards and accomplishments, Nancy Jones said in a statement. “We cannot thank Robert and the entire team at Gateway85 enough.”

Note to readers: Videos of Tim Jones’ performances are available on his page on YouTube.