Editor’s Note: This story has been updated to correct the number of neighborhoods studied, and to clarify the relation between two consulting companies that have worked for Atlanta.

A new report by Atlanta on the city’s housing stock confirms a view of the city documented in March by urban demographer Richard Florida  – Atlanta is split in half, with strong neighborhoods to the north and vulnerable ones to the south of a dividing line that passes near the Georgia Tech campus. 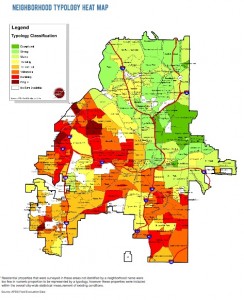 Click on the map for a larger version. This heat map in Atlanta new report on the city’s housing stock shows that the most stable areas for investments are clustered in the north, while vulnerable and fragile areas are clustered to the south. Credit: APD Solutions

One interesting finding in the city’s report is that Buckhead isn’t listed as an exceptional investment area. Instead, that designation is reserved for an area that stretches south from I-85 through Morningside and Poncy-Highland toward Druid Hills. The Buckhead area is ranked as strong or trending.

Atlanta says this report on the city’s housing is the first-of-its-kind study of 258 neighborhoods. It’s intended to enable policymakers to promote equitable residential development throughout the city. The city has scheduled two community meetings to discuss the study’s results – on Monday and Thursday evenings.

For the rankings of neighborhoods, open the report and skip to page 12.

The evaluation of neighborhoods is based on 25 factors, according to the report by the consulting firm APD Solutions. Eight categories were created, ranging from “exceptional investment area” to “fragile investment area.”

These findings generally match those determined by Florida. He covered Atlanta and the Atlanta region as part of his series titled, “Class Divided Cities.”

Florida’s report found that the city’s wealth-generating creative region begins near downtown Atlanta and spreads mainly to the north, with an arm stretching east of downtown.  Future wealth generation seem most likely to continue occurring in these neighborhoods, as well as the close-in suburbs. 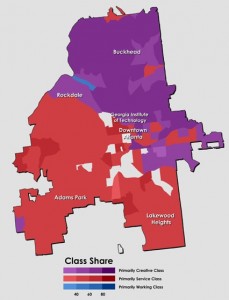 The class divide in the city of Atlanta is along an east-west line, according to urban theorist Richard Florida. Credit: theatlanticcity.com

Florida’s report states that service class neighborhoods comprise the remainder of the city. These neighborhoods are home to workers in, “Low wage, low-skill occupations in the food service industry, retail sales, clerical and administrative positions and the like.”

The APD report provides a snapshot of the city’s housing stock that shows Atlanta has:

The city’s study was completed by APD Solutions on behalf of Atlanta’s planning department. The company was formed in 2009 to help city officials and housing advocates revitalize communities hit hard by the recession, according to a statement announcing its formation.

Atlanta planning officials said company is different from APD Urban Planning & Mgmt, LLC, which has worked for Invest Atlanta in the Vine City and English Avenue neighborhood. This company’s work is being incorporated into planning for the community benefits deal that’s to guide the spending of $30 million in public and private funds to promote renewal, and to mitigate the effect of the stadium, in neighborhoods near the future Falcons stadium.