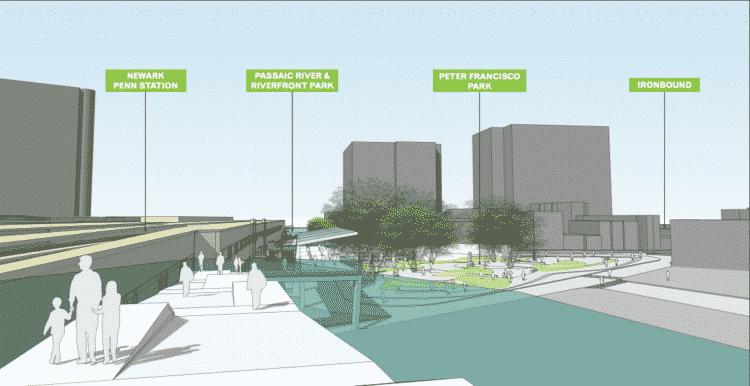 Newark's planned linear park and walkway is to link the Ironwood neighborhood, that city's version of Krog Street, with the Newark Penn Station. Credit: Newark

Newark is the latest city to plan its version of the Atlanta BeltLine. This being New Jersey, the arc toward an alt-transit oriented greenspace flanked by mixed use development traveled some gritty ground. 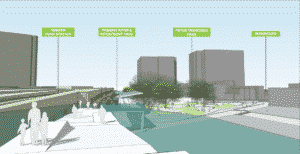 Newark’s planned linear park and walkway is to link the Ironwood neighborhood, that city’s version of Krog Street, with the Newark Penn Station. Credit: Newark

City leaders announced in January an agreement to end decades of debate over what to do with a blighted section of downtown Newark. They couldn’t have been more effusive:

Instead, Booker convinced the Trust for Public Land to develop three unused city-owned tracts into playgrounds and a park overlooking the Passaic River, according to a report in governing.com.

The tide turned in favor of the newly announced deal when a major landowner came on board with plans to create Newark’s version of the High Line walkway, in Manhattan, according to a report Tuesday in wsj.com. 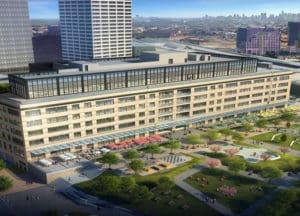 The anchor of Newark’s version of the Atlanta BeltLine is to be a renovated warehouse, much as the Ponce City Market (a former Sears warehouse) anchors the BeltLine near Old Fourth Ward Park. Credit: Newark

In this case, coming on board amounted to $100 million in private funding for an elevated walkway and the conversion of a vacant warehouse – think of the current Ponce City Market, nee Sears warehouse – into retail shops and office space.

The red dotted lines park the path of Newark’s planned walking pathway, which is the city’s version of Atlanta’s BeltLine. Credit: Newark

The city announced in January that it was throwing out the window the former plans for creating Triangle Park.

Mulberry Commons is the new name and a statement issued by the city makes the project sound impressive:

The city’s statement indicates Edison is putting up $100 million dollars. Public funds account for $10 million, according to the statement. 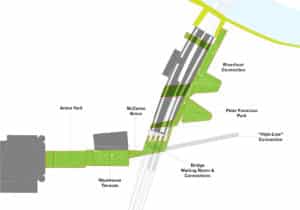 This birds-eye view shows the footprint of the smaller parks to be built as part of Newark’s overall plan for the future Mulberry Commons. Credit: Newark

City officials talk as if the sky is the limit for the economic impact of the redevelopment, according to the statement – in excess of $500 million over a period of time the statement didn’t identify.

As the acting head of Newark’s economic development corporation observed: