One of the new Buc shuttles in Buckhead as seen on an April 12 test ride. (Photo by John Ruch.)

On-demand public transit is suddenly in demand after years of official musing about the potential of Uber-style vanpool shuttles hailed with an app. In the past 18 months, on-demand transit has launched across Georgia, from Atlanta to Valdosta to Gainesville.

Is this a revolution in convenient and appealing transit, or hype for more inefficient and road-clogging traffic? Advocates and critics differ on the details while agreeing on-demand has its place and its unknowns. Either way, we’re about to find out as these experiments drive ahead.

In metro Atlanta, two new on-demand programs are aimed at “last-mile connectivity” for fixed-route transit riders, with the implication of boosting overall transit ridership. MARTA Reach, a pilot program between the transit agency and Georgia Tech, launched on March 1 with coverage zones in Forest Park and Southwest and Southeast Atlanta. The Buc shuttle, operated by the nonprofit Livable Buckhead with funding from the Buckhead Community Improvement District (CID), is scheduled to begin serving that neighborhood’s central business area on April 19.

Jim Durrett is familiar with both — he’s the CID’s executive director and sits on MARTA’s board of directors.

“The fact that both Buckhead and MARTA are introducing on-demand transit systems shows that there’s tremendous potential for this model in Atlanta,” Durrett said. “Providing fast, low-cost service for last-mile connectivity and other short trips has been difficult and it limits the appeal of transit as a mode of travel. If we can solve that problem with services like the Buc and MARTA Reach, we can make it much easier for people to choose transit.” 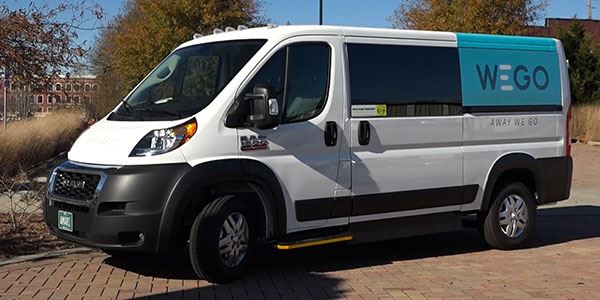 Jarrett Walker, an Oregon transit consultant, is skeptical of on-demand — sometimes called microtransit or flexible transit — and in particular its selling point of boosting ridership. Walker declined to comment because he is currently working for MARTA on a revamp of its bus routes, but he pointed me to his blog posts on the subject. In those essays, he said on-demand transit is inherently far less efficient than fixed-route buses due to wandering routes and relies on low ridership because otherwise it becomes infeasible in time and money. That makes it best suited to small-town, rural and suburban-sprawl areas.

“Flexible service will never compete with fixed-route on ridership grounds, so it should stop pretending that it can,” Walker wrote in one essay. “Market the service as what it is. It’s one tool for providing lifeline access to hard-to-serve areas, where availability, not ridership, is the point.”

That is the function of the new services in Valdosta in southern Georgia and in Gainesville/Hall County in north Georgia. Both are small communities surrounded by rural areas. Accessibility across a sprawling area is more important than high ridership for such services.

The Valdosta On-Demand service, consisting of seven vans that can be hailed immediately or booked in advance, launched in April 2021. Among its fans is U.S. Jon Ossoff (D-Ga.), who visited last year to praise the service and discuss federal transit funding. For $2 a trip and $1 for each rider’s companions, it will go anywhere within a large zone. Popular spots include Walmarts, the big mall, the medical center, the library, the community center and Valdosta State University.

“The program has functioned extremely well,” said Anthony Musgrave, operations superintendent for the City of Valdosta. “Demand and ridership growth continue to climb each day. So far, the program has exceeded our expectations.”

That currently means an average of 318 rides a day with an average trip of 5.2 miles — metrics of the large, low-density service area.

Hall County is also happy with its service, WeGo, which launched in Gainesville in December 2020 with five vans, then expanded to the entire county with 12 more vans in July 2021. The county already had a fixed-route bus service and a “Dial-A-Ride” service, both of which have been replaced by WeGo.

Phillippa Lewis Moss, director of the Gainesville-Hall Community Service Center, said the old system had around 100,000 trips a year. WeGo is on track to do the same, she said, at about 90 percent of the cost. But she also cautioned that Hall’s success might not transfer to the big city.

“Be clear that microtransit isn’t for everyone,” she said. “Hall County is 410 square miles with very low density, and home to Lake Lanier, which is an awesome recreation site, but poses challenges when operating a traditional public transit service. The traditional fixed-route approach wasn’t a good fit for us. So far, microtransit is a more effective and efficient model for our community.”

In Atlanta, where MARTA already has an extensive system of bus and rail routes, the on-demand goals are somewhat different. The focus is the last-mile connectivity issue of people whose destinations are significantly far from an existing bus stop or transit station and who might not want or be able to walk. But overall ridership is a factor now as well, as everything transportation systems knew about commuting and demand was upended by the pandemic. Besides the immediate ridership plunge, MARTA is now dealing with a world of telework that at least in part appears to be here to stay.

On-demand transit is an old idea, and MARTA has experience through its Mobility service for people who use wheelchairs or have other special needs. MARTA Reach, though, is its first foray into something more Uber-esque, and the agency is entering cautiously with a six-month pilot to see how it goes.

“MARTA is interested in exploring how rideshare service can be used to connect riders to and from MARTA bus and rail, making it easier and faster for customers to get to their destinations using MARTA and help minimize waiting and walking,” said transit agency spokesperson Stephany Fisher about its $2.50-a-ride service.

What that could mean for fixed-route bus service long-term is a bit unclear. One of the Georgia Tech team members earlier this year told Mass Transit magazine that part of the pilot program’s vision is “replacing some low-ridership fixed-route services” with on-demand transit and “scaling up the on-demand portion over time.” That’s the sort of claim Walker says is nonsense due to fixed route’s far greater efficiency.

Asked about that Georgia Tech quote, Fisher talked about addition rather than subtraction. “MARTA is evaluating how on-demand transit can work to complement and extend fixed-route bus service as we explore a redesign of our entire bus network,” she said.

A commonality of all of these programs is another factor that divides opinions: semi-privatization of transit. The Hall, Valdosta and Buckhead programs are all using the tech of Via Transportation, a New York company that is rapidly growing from campus shuttles to urban transit. MARTA says it is partnering on its pilot with Georgia Tech due to expertise and an available grant, but that if it chooses to move ahead with permanent on-demand transit, it likely would go with a commercial tech company, too.

On-demand transit can provide better connections to economic opportunities, but Walker has written with skepticism about its economic justice. With labor being the main operational cost of transit, he says, on-demand services often find savings by lowering drivers’ wages. And as low-ridership services, they can shift public transit money from serving the most riders to the fewest.

The Buckhead service is in a unique position of waiting to see who those riders will be, as its original intent was to serve both commuters and the booming population of new condo and apartment residents in the traditional commercial area. The new Buc shuttle replaces a previous, fixed-route version of the same name that launched in 2003 and ran two loops from MARTA stations to office complexes.

The new service will go just about anywhere within a zone around the Buckhead and Lenox MARTA Stations. Trips to or from those stations are free, while other rides are $3. Reducing car use by encouraging transit is a major goal, though on another edge of the on-demand sword, the vans are likely to many more miles than fixed-route services and produce emissions, which Livable Buckhead aims to address with a carbon-offset program.

The new Buc’s launch was scheduled for April 2020 and the pandemic sure has changed its landscape. Livable Buckhead acknowledges that commuter ridership is anyone’s guess with Buckhead’s in-office occupancy still hovering around 50 percent, though the organization has hopes of capturing commuters whose old car-oriented ways have been disrupted. During a recent test drive of the service, planners mused about other potential ridership, such as seniors or people who use wheelchairs. In a way, it may be a solution in search of a new problem, or at least an amenity in search of admirers.

I test-rode the van to the Lenox Square mall and enjoyed it a lot more than driving myself. But did I enjoy it more than an Uber, which I also could afford now and then? Looking at the coverage zone, I noted I also could go to its remote reaches in Buckhead Village by MARTA’s existing 110 bus. But would I? After all, like others who joined me on the test ride, I drove to the shuttle in the first place.

This sort of mental calculation is what Atlanta planners want to figure out, but maybe another point is who cares what I think? I’ll get to the mall one way or another. Using oneself as the yardstick can lead to what Walker calls “elite projection — the tendency of fortunate people to assume that whatever they personally like will be good for society as a whole. An urban elite has seen their lives transformed by ride-hailing services, and understandably wants to believe that this transformation can be brought to transit, too.”

On-demand sure sounds like it’s having transformations in Valdosta and Hall, and has potential in Atlanta. It also sounds like it can have many complex issues, too. The next six months or so should be an interesting ride.