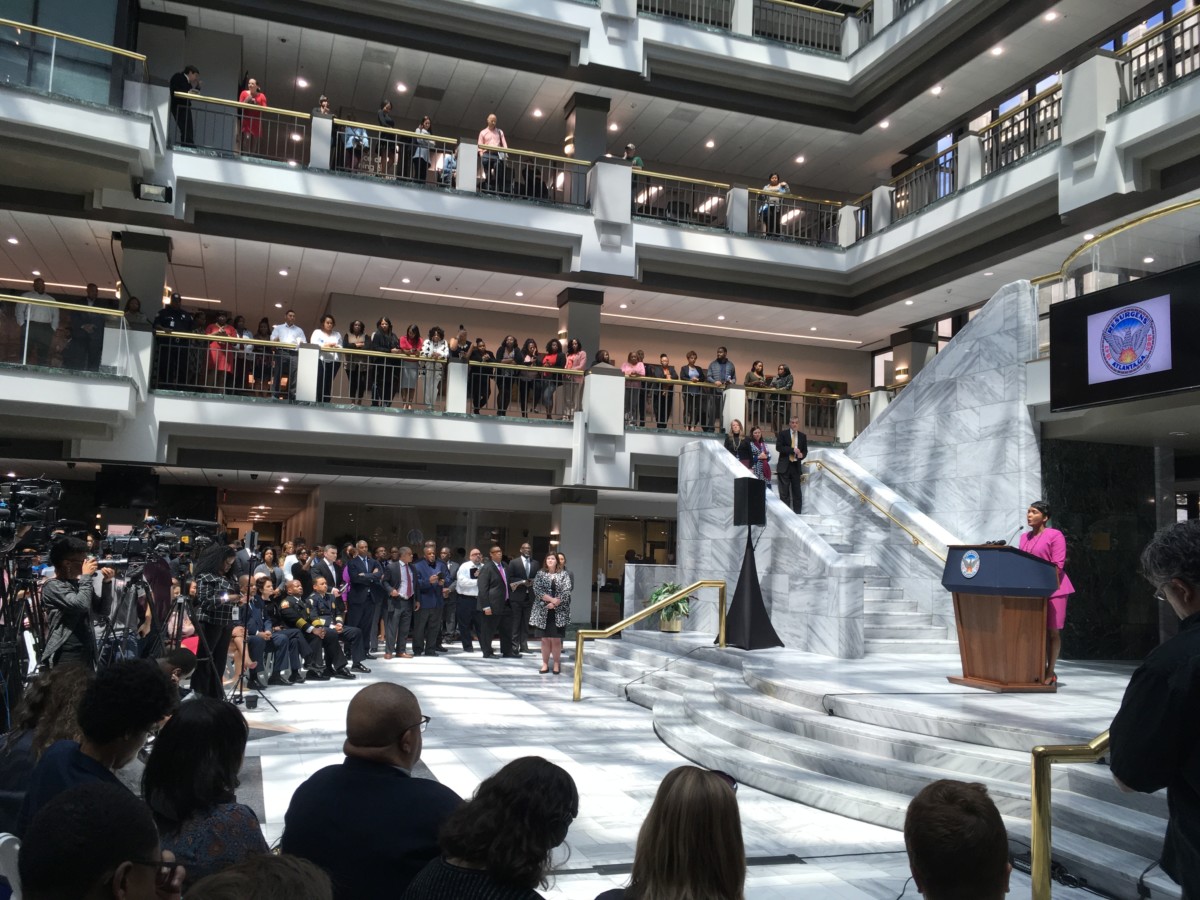 At an April 10, 2018 press conference about 100 days into her administration, Atlanta Mayor Keisha Lance Bottoms announced that she had asked for cabinet resignations. Credit: Maggie Lee

For the symbolically significant one-hundred-day mark of her administration, Atlanta Mayor Keisha Lance Bottoms is thanking employees, evaluating leadership and looking to rebuild public trust at what she called an “uncomfortable” time for the city.

“Change is sometimes uncomfortable, but often necessary, so during this uncomfortable time, know that you are still appreciated,” Bottoms told hundreds of city employees watching from all levels of City Hall’s atrium on Tuesday. 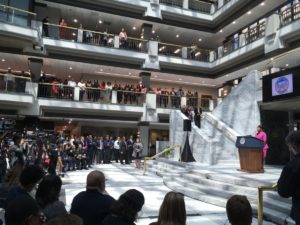 At a Tuesday press conference about 100 days into her administration, Atlanta Mayor Keisha Lance Bottoms thanked employees for their work during an “uncomfortable” time. Credit: Maggie Lee

It was part employee pep-talk, part press conference to announce that the city plans in the coming months to open a website where the public will be able to find salaries and spending down to a granular “checkbook” level.

“I believe it [the new site] will go a very long way in serving the city of Atlanta and helping to re-establish trust in our city government,” Bottoms said.

Bottoms’ press conference came right in the middle of several things that might be sources of discomfort.

Just over a week ago, the U.S. Attorney talked about the indictment of a former top city official in that bribery investigation and called on anyone else who’s involved to contact investigators.

The city is still rebooting and recovering from an attack by online ransomers who locked the city away from its own documents. The city has awarded some $2.6 million in emergency contracts to deal with it.

And on Monday, the AJC had reported that Bottoms had demanded resignation letters from her cabinet and would decide by Friday who stays.

Bottoms said that Monday left people “very unsettled.” She said she felt it was important to tell employees they are appreciated and “we will be stronger on the other side of this uncomfortable time.”

The mayor said there’s likely to be some reshuffling in her cabinet, and some folks may leave, but she declined to put any “artificial” timeline on getting her personnel lined up.

So far, Bottoms has made one high-level appointment, that of acting Chief Operating Officer Richard Cox for 90 days.

The appointment ran into some light headwinds at City Council. Not on the merits of Cox, which nobody questioned. But instead on the right of Council to review nominees for top offices.

Cox’ arrangement is unusual: he’s to remain on the payroll of his employer, Cox Automotive. The company will donate his services to the city. That’s worth $305,000 on an annual basis, the budgeted salary and benefits of a COO.

But more than half of Council members balked at a resolution that seemed to confirm him for a year as of their March 19 meeting without their review.

“I don’t want the record to show that we’re approving a one-year tenure without having gone through the committee [confirmation] process,” said Councilman Amir Farokhi said that day.

Instead, by a vote of 13-1, they approved an ordinance amended by Farokhi that accepts up to 12 months’ worth of a donation, but removed the reference to the start date.

So Cox remains “acting” COO, and Bottoms has the option to renew that appointment 90 days at a time, according to her office. And Council’s actions technically allow the city to accept Cox’ services as a donation for up to a year.

If Bottoms wants him to stay in office that long, Cox “can either go through Council for confirmation or obtain an extension. The progression of the national search would help determine which approach is utilized,” according to her office.

Cox himself told Council members at that meeting that he appreciated their detailed discussion and said that in it he saw their diligence.

Though Cox’ services are a donation, his communications are covered by the state open records act, according to Bottoms’ office.