One neighborhood’s question: How to respond to first huge proposed development

Residents of a quiet neighborhood in Southwest Atlanta have to decide if they support or oppose a proposed multi-story housing development for senior citizens, one with a density that could bring the type of life-altering effects familiar in faster-growing parts of the city. 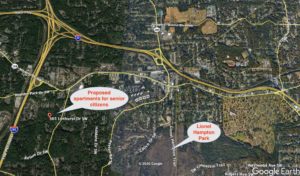 A twist with this project is the mixture of emotions it’s elicited – a desire for development, and apprehension over the change it would bring. About 700 rental apartments are proposed in three structures, one of them standing up to 14 stories above its parking deck. The only driveway would connect to a two-lane road in which potholes are appearing just three years after the road was rebuilt with spacious sidewalks and fresh asphalt.

“The task force expressed a desire to work with the builder to make recommendations, because they are interested in seeing development – but they want to make sure it fits in with the existing community,” Eunice Glover, NPU-I chairperson, said Monday

Neighbors established a task force to consider the proposed development and present recommendations at the Sept. 16 meeting of Neighborhood Planning Unit I. The NPU’s recommendation will inform the Atlanta City Council’s decision on the developer’s pending request for rezoning, which is the first government hurdle the development must clear.

“They are all for the development, that’s what came out of the task force,” Glover said. “So long as it fits in with the existing properties and doesn’t create tremendous problems for the new people, as well as the homeowners who are already here.”

Specific concerns include the traffic to be created by future residents of the independent living community, plus the visual effect of the height of the three buildings. The planned structures range in height from five to seven stories, atop a two-story parking structure; eight to 10 stories; and five to 14 stories, according to the development plan filed with Atlanta’s City Planning department. 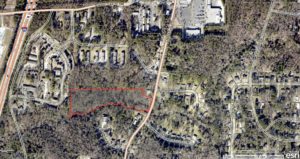 The 11.8-acre site of a proposed apartment development is marked in red. The property has a house next to Lynhurst Drive and is otherwise undeveloped. Credit: Fulton County Tax Assessor

The proposed development is to be located on an 11.8-acre site at 365 Lynhurst Drive. A vacant house is the only structure on the property, almost half of which is in the 100-year floodplain of Utoy Creek, according to the site plan.

Lynhurst Drive is a tree-covered corridor two miles southeast of the I-20/I-285 interchange. Lynhurst Drive runs North/South, a half-mile inside of I-285, and connects Martin Luther King Jr. Drive with Cascade Road.

This area of Atlanta hasn’t been the site of many large developments. But they are starting to appear – houses are priced starting in “the mid $400,000s” at the new Hampton Preserve development, two miles to the east and near the renown mature forest in the city’s Lionel Hampton Park.

In terms of trees on the development site, the plan is to, “preserve a maximum number of existing trees” because 45 percent of the property is to be preserved as greenspace. The greenspace appears to be located in the 100-year floodplain of Utoy Creek, according to a site plan.

The proposed development along Lynhurst Drive is to be a rental apartment community for seniors who do not need assistance. It’s to include a commercial district with space for offices and shops, and not a grocery store. The nearest grocer is a Wayfield Foods Supermarket, a half-mile to the north.

The density would be comparable to projects along the portion of the Atlanta BeltLine in Northeast Atlanta, or in Midtown or Buckhead. A wrinkle is the high proportion of affordably priced units. The proposal calls for:

In terms of affordability, and by way of perspective, the city’s housing authority intends to provide 46% of units at up to 80 percent of area median income at Herndon Homes, according to a report last week. Atlanta Housing demolished Herndon Homes in 2010 and, in January, started construction at the site, located near Mercedes Benz Stadium.

Glover said the task force supports the notion of senior living in the neighborhood. A traffic study could speak concerns about traffic congestion at a complex that’s likely to bring more than 700 additional vehicles to the area.

“They do want to see senior homes, and do want to see just more people,” Glover said. “The concerns of the task force are, basically, about a traffic study; they did not see one and Lynhurst is one of the most beautiful streets around and we’re seeing speeding and traffic. Also, there are concerns about the fact that the buildings are so high; that was a concern.”