Buckhead cityhood would require approval by a supermajority of Atlanta voters in a citywide referendum under legislation filed today in the Georgia House of Representatives.

The legislation was announced at a Jan. 12 virtual joint meeting of Atlanta’s state House and Senate delegations, who heard from cityhood opponents. They included new Mayor Andre Dickens, who repeated his inaugural address metaphor that “we have to draw circles and not lines, and that’s what we’re going to do.”

The bill and the meeting continued the spectacle of Buckhead cityhood legislation being driven by Republican lawmakers from outside the city while being opposed by the all-Democrat Buckhead and Atlanta delegations. Cityhood supporters are attempting to gain General Assembly approval for a Buckhead-only referendum on the November ballot that would deannex the neighborhood and incorporate it as a new “Buckhead City.”

The bill attempting to checkmate that move was filed as the meeting took place by Rep. Shea Roberts, who represents parts of Buckhead and Sandy Springs. She said Sen. Jen Jordan, who also represents part of Buckhead and is running for the Georgia attorney general’s office, will file a companion bill. The House bill will get a first reading on Jan. 14, Roberts said. 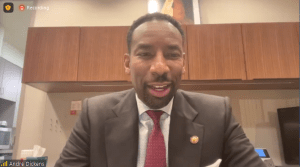 Put more simply, that means that Buckhead could leave only in a citywide, supermajority vote, not a local one and not with a traditional 50 percent-plus-1 majority.

Roberts noted that there is already talk of other neighborhood secession movements in places like Midtown and Athens, and “this would make sense for all of those.”

As a twist of the political dagger, the 57.5 percent supermajority number came from previous legislation for the incorporation of Sharon Springs in Forsyth County filed by Rep. Todd Jones (R-South Forsyth), who is the sponsor of the House version of the Buckhead City bill. The Sharon Springs cityhood won a majority of votes in a 2018 referendum, but died because it failed to hit that supermajority number.

Roberts’ bill mirrors a pitch made earlier in the meeting by Edward Lindsey, a former state representative who is now co-chair and lobbyist of the anti-cityhood group Committee for a United Atlanta. Lindsey asked that if cityhood supporters believe their pitch that secession is good for both Buckhead and Atlanta, “why then do only the folks in Buckhead have the right to vote?”

“Now, I have as much hubris as anyone about Buckhead,” he said. “But I don’t believe the folks in Buckhead should have any more electoral rights than folks in Ansley Park and Morningside and in South Atlanta and West Atlanta and Midtown, or anywhere else.”

He also said a supermajority should be required in a referendum on a question as consequential as “carving up the capital of the state.”

Lindsey was among several cityhood opponents to speak in the hearing, including representatives from Neighbors for a United Atlanta, the Georgia Municipal Association and Atlanta Public Schools.

Rep. Betsy Holland, a Buckhead Democrat, said that Bill White, the chairman and CEO of the pro-cityhood Buckhead City Committee (BCC), was invited but had a schedule conflict and could not find a matching time to reschedule. If he becomes available, Holland said, the delegations would hold another meeting to hear from him. In the virtual chat, an attendee identifying himself as BCC President Sam Lenaeus said that the group had offered another speaker to the delegations and had been rejected.

Dickens, who took office on Jan. 3, emphasized his unity theme, saying that “just this week alone, we’ve already proven the part we can go farther and do more when we work together.” He said his administration will “focus, of course, on keeping Buckhead as part of our city and delivering great services to everybody” in Atlanta.

Dickens also looked beyond the city itself on the unity message. “Being a regionalist is so important,” he said. “How Atlanta goes, so goes the region.”

Kenyatta Mitchell, the new director of intergovernmental affairs in Dickens’ administration, said the mayor was attending roll calls at police precincts and would unveil a new mini-precinct on Jan. 13 in Buckhead’s West Village neighborhood. “So that will be another line of defense for the residents of Buckhead,” she said.

Mitchell also took a swipe at the BCC’s recent claim that the Atlanta Police Department is lowering standards to fulfill Dickens’ plan to hire 250 more officers. Like APD itself, Mitchell said that is not true and is “really, honestly a slap in the face of our first responders… They are absolutely top-notch and we’re happy to have them.”

The other speakers largely restated the lack of information about many serious and legally complex questions raised by the cityhood concept, including the status of public schools and bond debt. However, strong new messaging came from Robert Ashe III, a government lawyer with a long record of representing the City of Atlanta and a former MARTA board chair.

Ashe said that many of those issues were also challenges when Buckhead and other areas were annexed in the 1940s and 1950s and that the answers involved amendments to the Georgia Constitution that applied only locally. But under the current Constitution, such local amendments are prohibited, so “that tool no longer exists.” As cityhood proponents essentially promise that details will be worked out later by government agreements or court decisions, Ashe said, that is “just whistling in the dark” because there are no legal mechanisms for doing so.