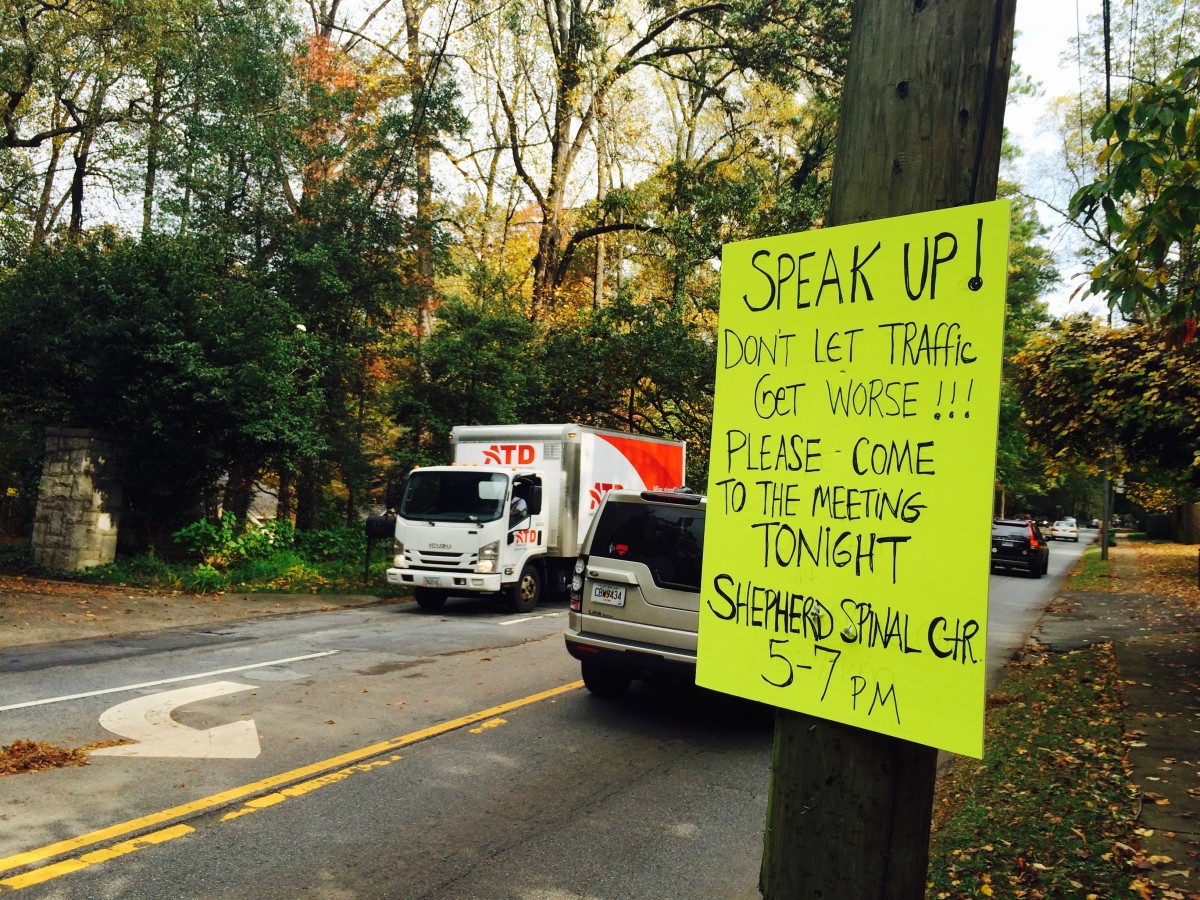 Hand-made signs dotted West Paces Ferry Road Thursday in advance of a public information meeting at which the Georgia Department of Transportation outlined the proposal to add two bike lanes and a shared left-turn lane to Peachtree Road in Buckhead. Credit: David Pendered

Please see an Editor’s Note at the end of this story.

A public information meeting on the state proposal to add bike lanes to a portion of Peachtree Road in Buckhead drew a large crowd Thursday that seemed evenly divided among proponents and opponents. 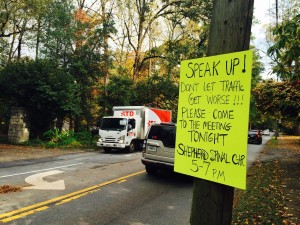 Hand-made signs dotted West Paces Ferry Road Thursday in advance of a public information meeting at which the Georgia Department of Transportation outlined the proposal to add two bike lanes and a shared left-turn lane to a portion of Peachtree Road in Buckhead. Credit: David Pendered

The crowd was sharply divided on the proposal, based on a count of lapel stickers.

The issue is fairly straight forward.

The Georgia Department of Transportation proposes to install a street configuration on Peachtree Road that’s similar to what it installed on Ponce de Leon Avenue.

On Ponce de Leon, the state striped the street with a shared left turn lane and travel lanes in each direction. Markers for bike lanes are painted on the road surface.

A similar approach for Peachtree Road in Buckhead has been in the planning for about two years. The main reason the issue arises now is that this section of Peachtree Road is due for resurfacing.

GDOT spokesperson Natalie Dale said the department decided that, as long as it’s resurfacing the road, it should look for ways to make the road a safer place to co-exist for motorists, bicyclists and pedestrians.

Public interest in the project is so high that GDOT started admitting a crowd of folks about 15 minutes before the announced start of the information meeting, at 5 p.m. At 6:30 p.m. a half-hour before the close, about 75 folks were still milling around the placards and talking.

By comparison, some of the “Revive 285” meetings and some on the intersection of Ga. 400 and I-85 have, in the past attracted, mainly GDOT staffers who are required to attend. 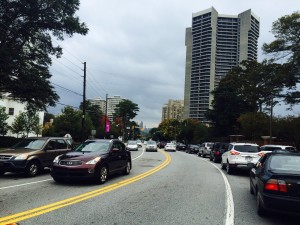 Heavy traffic and a high number of crashes on Peachtree Road, in Buckhead, has prompted the Georgia Department of Transportation to propose restriping the street in order to provide two bike lanes and a shared left-turn late, as part of a planned $1 million street resurfacing project.

Dale rattled off a number of safety issues involving Peachtree Road, mainly involving drivers who are texting, or otherwise distracted, who crash into the rear end of the car ahead. The resulting car crash further disrupts traffic flow as public safety folks arrive to clear the mess and be available to transport injured persons to the hospital.

One chart displayed at the event reported this section of Peachtree Road had 801 crashes from 2009 to 2013. Eleven bicycle crashes were reported, along with 42 pedestrian strikes. All three categories are above state averages.

John Foley, of Peachtree Heights West Civic Association, said Thursday that GDOT created six different plans over the past two years. He said the 550 families in the association don’t understand why GDOT shifted its backing from a six-lane, hybrid plan to the current proposal.

Foley said his neighbors don’t want bicyclists on this stretch of Peachtree Road. The road already is overburdened with traffic, and the overriding concern should be to speed vehicles safely through the area.

Anthony Vito said he expects GDOT will choose a plan that provides the greatest level of safety for all travelers, regardless of their mode of transportation.

Vito presents himself as someone who stays out of a vehicle whenever possible. Vito said there’s no reason to ride a bike if the destination is a short distance, because “sneakers” are the best mode for that trip. Likewise, a longer trip is worth the effort to get the bike from apartment to the road. He said he had to buy a car when he arrived in Atlanta, from Rochester, N.Y., because his bike didn’t accommodate all his travel needs. 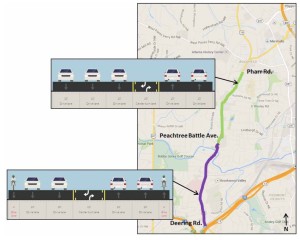 This is the GDOT preferred plan for reconfiguring the travel lanes along Peachtree Road in Buckhead. Credit: GDOT

Here are the details of the project, complete with the wrinkle with the Peachtree Road project that involves two different lane configurations:

Editor’s note: In the FWIW category, Pendered was almost struck by a car when leaving the GDOT meeting. Pendered was walking across Peachtree Road, in a marked crosswalk on a green light, when a distracted driver swerved just four feet from his legs. The driver was exiting the Darlington apartment building, turning left, and looking down in order to light a cigarette.