‘Phoenix’ – a must see movie

A scene from the movie "Phoenix"

“Phoenix” reminds me of “The Lives of Others.”

Not because the plot, characters, themes or even tone are similar.  But everyone who took a chance on “Others”  – a 2006 German film set in East Berlin in the ‘80s – came away incredibly excited and engaged by what they had seen.  People I thought would never in a zillion years even give the picture a look couldn’t stop talking about it.

So it is with “Phoenix,” if you’ll just go see it.

Nelly (Nina Hoss, perfection) is herself a sort of phoenix. A concentration camp survivor, she’s risen from the still-smoldering embers of Auschwitz. 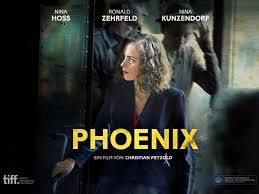 A movie poster of “Phoenix”

Still, she hasn’t come away unscathed. Her face is swathed, mummy-like, in layers of bandages. The disfigurement is so extreme that when an officious border guard demands she remove them (smuggling contraband underneath?), his reaction is a brief muffled “I’m sorry.”

A plastic surgeon says he can make her look like anyone she’d like and names a few famous actresses.  She only wants to look like herself.  Or as much like herself as possible. He tries to talk her out of it: a new face, a new beginning. But tellingly – in retrospect – she wants the face she had before.

Because she wants the life she had before as well. What kept her alive in the camps was her love for her husband, Johnny (Ronald Zehrfeld), not Jewish and therefore not sent away.

When she finally finds him, he doesn’t recognize her (the surgery could only do so much). But she’s enough like the wife he believes to be dead that he hatches a scheme: he will train this stranger to be his long-lost spouse. To what purpose? So he can claim the considerable wealth she will inherit as her family’s sole survivor.

A scene from the movie “Phoenix”

This is “Vertigo” territory, but with an insidious twist. The greedy arrogant Johnny is training Nelly to be herself. And she decides to go along with it. The film becomes a hall of mirrors, reflections within deceptions, building to a final scene that’s as memorable as it is haunting.

“Phoenix” has the look and feel of an exceedingly perverse film noir. In one remarkable scene, we glimpse the ward where Nelly has been sent for her surgery. The corridors are full of mummies – faces wrapped, but eyes that burn. Here are the true walking dead.

Outside, there is Berlin, reduced to rubble, echoing the shattered remains of those who survived the Final Solution, as well as those who chose to turn a blind eye to horror. Or maybe even helped it along.

Previous Article
Atlanta Mayor Kasim Reed: We are going to find a way to preserve Gaines Hall
Next Article
Are we that different? Thoughts on shared history of North and South – from the cotton economy to 20th-century fights for freedoms