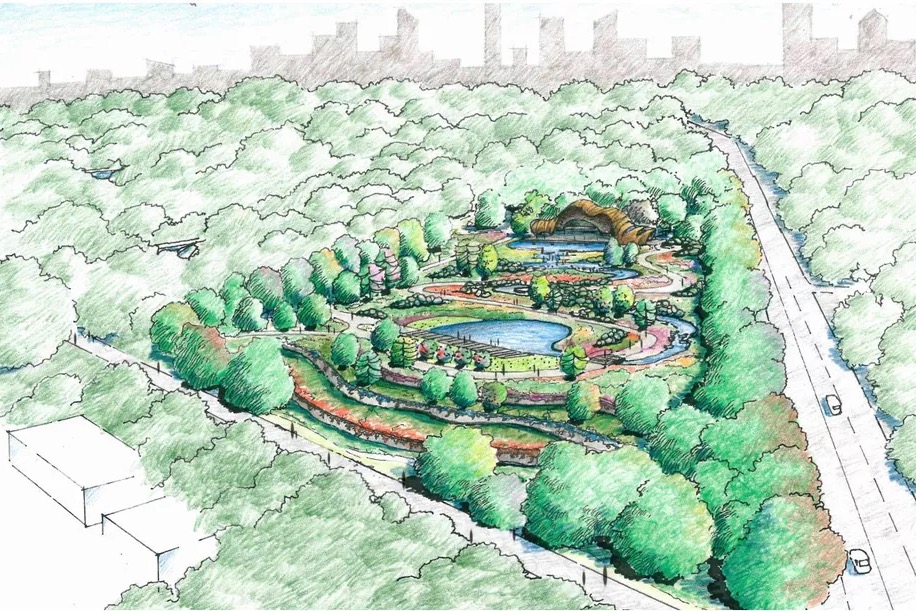 A sketch shows an idea for how to build out a Piedmont Park expansion for which the city intends to buy property at Piedmont and Monroe. Credit: Handout

Almost two years ago now, Atlanta’s then-Mayor Kasim Reed announced the city would pay some $20 million toward a $100 million expansion of Piedmont Park and the Atlanta Botanical Garden. And it’s still on, says the Garden’s leader.

But it takes time, said Atlanta Botanical Garden President and CEO Mary Pat Matheson, in a phone interview, just to check back and see what’s happening. And talks are happening quietly.

The idea is to expand the green space north to fill out the corner where Piedmont Avenue meets Monroe Drive at Hobnob; and also to expand a little west, to fill a triangle on Piedmont where there’s now a self-storage place and other shops.

The main thing that’s happened since the announcement is the city’s closing on part of the south corner at Piedmont and Monroe for about $20.4 million, making it the landlord of the shopping center that includes Ru San’s.

It’s not quite the whole corner, much less the additional triangle on Piedmont. 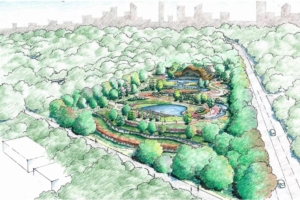 A sketch shows an idea for how to build out a Piedmont Park expansion for which the city has bought property at Piedmont and Monroe. Credit: Handout

“We’re looking for funding for that, we’re talking to landowners,” Matheson said. “It’s one of those projects that is a big, visionary bold idea to expand Piedmont Park and create a northern gateway, which would be fabulous. And also to expand the Garden and have a green boulevard along Piedmont Avenue.”

But part of the job is bargaining with landowners who know that some very motivated buyers are on the line.

There resulting green space is meant to be a node on the BeltLine, a spot for urban agriculture and an additional grand entrance for the whole park. While there are some conceptual sketches, the details of buildings or layout aren’t settled.

“We’ll do an RFP to bring in some national firms. One of the concepts right now is to do an idea competition. So, these firms could, think about: ‘How could you activate that new corner of Piedmont Park?'” Matheson said.

The private capital campaign’s goal is to raise $80 million, and will be chaired by recently retired Home Depot Chief Financial Officer Carol Tomé, on behalf of the Garden and Piedmont Park Conservancy.

That 20/80 share, in fact, is why Reed said it was worth spending a big chunk of city money on a park in a part of town that’s already well-served by parks.

Bottoms joined Reed as a councilwoman when he made the Piedmont Park announcement in December 2017.  Bottoms expressed support again in April as mayor, at an address to the Piedmont Park Conservancy, the Atlanta Journal-Constitution has reported. Her office did not reply to a request for an update on the expansion.

Matheson said she expects that in the new year there will be more to talk about.

“Once we get through the quiet phase, I think it’s going to be really exciting,” Matheson said.

Previous Article
See what kids can become if they are not hungry
Next Article
A Georgia vote reveals innate tension between energy, environmental policies