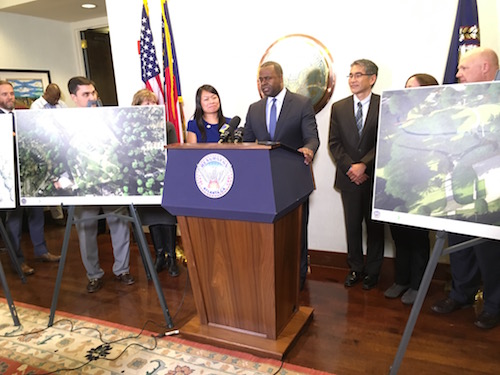 Philanthropies and the city of Atlanta are planning a $100 million spend on an expansion of Piedmont Park and the Atlanta Botanical Garden, part of which will extend green space to the corner of Piedmont and Monroe, Mayor Kasim Reed announced on Friday.

The city has signed letters of intent to buy out two primary property owners. Reed’s announcement about the letters marks what will be one of his last official actions, as his term winds toward its final days. 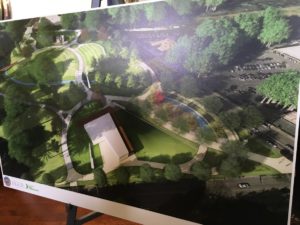 A sketch shows an idea for how to build out a planned Piedmont Park expansion toward the corner of Piedmont and Monroe. Credit: Maggie Lee

“This purchase of land will enable a street-corner transformation that will lift the curtain on Piedmont Park and our Atlanta Botanical Garden. It will give us a visual stage that we really have never had before,” said Reed.

He said philanthropies will contribute $80 million. A committee chaired by Home Depot CFO Carol Tome will work on the philanthropic fundraising. The city would pay the balance, $20 million.

“If we don’t expand Piedmont Park and the botanical garden now, we don’t think we’re going to get another chance,” Reed said.

Atlanta Botanical Garden President and CEO Mary Pat Matheson was among the folks who praised the plan.

“The first piece is the piece at Piedmont and Monroe and that’s about three acres,” she said at the press conference. “It will be the new gateway to the park. And then along Piedmont and adjacent to the garden is another two acres. There’s more property we will need to get together, but these two are the biggest pieces and they were right now under the threat of development … So that’s how we got to the now-or-never moment.”

The city would pay its share from various sources including park impact fees, transportation sales tax (TSPLOST) funds, watershed funds and a gift of $2 million that Reed said came in Thursday night from someone who wished to remain anonymous.

There are businesses operating on the south corner of Piedmont and Monroe; a city spokeswoman said Atlanta would take on those current leases and use the net income from them. 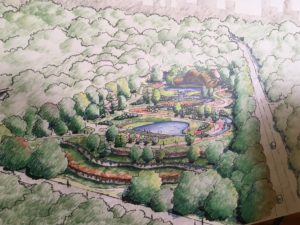 Another sketched plan for the site. Credit: Maggie Lee

The move still needs Atlanta City Council approval, which will include the due diligence to proceed with the sale agreement.

The next chance for Council action to start will be after new members and Mayor-elect Keisha Lance Bottoms take office next week. Bottoms joined Reed’s press conference and expressed her support for the expansion — she said it’s an example of something that Atlantans and their parents and children will be able to enjoy.

However, she also is among those who have pointed out that some areas of Atlanta have far more park space than others. On the campaign trail this year, Bottoms said her own NPU (NPU-Q, centered in Cascade) is the only one in the city without designated parks and green space.

Asked why a Piedmont spend is a good idea, given that there is a lack of geographic equity, Reed said the answer is leverage.

“While I appreciate the demand for equity, sometimes you have to look at the facts and the fact is my administration has invested more in park space expansion than any other in 40 years.”

If they didn’t make the deal today, he said the city risked leaving $80 million of philanthropic money on the table.

“The fact of the matter is, all of the leading philanthropies have come to the table to say ‘We’re in,'” said Reed.

The announcement came about a week after the city’s development authority gave conditional approval to a city land sale for a big build on the BeltLine at Piedmont Park. The buyer’s plans include an 11-story hotel at Piedmont and Tenth streets.