The former Lakewood Elementary School at 335 Sawtell Ave. in a photograph from the Lakewood Heights Historic District filing on the National Register of Historic Places. The filing was submitted in 2002.

An Atlanta Public Schools proposal to demolish the historic Lakewood Elementary building is being blasted as “shameful” by City planning staff in advance of a Jan. 12 review hearing.

The long-shuttered school at 335 Sawtell Ave. is at least 89 years old and is listed as a significant “community landmark” contributing to the Lakewood Heights Historic District on the National Register of Historic Places. APS wants to tear it down and replace it with nothing but grass after sales attempts reportedly failed.

The demo is not being well-received by planning staff with the Atlanta Urban Design Commission (AUDC), which will review the proposal, nor by the Atlanta Preservation Center (APC), a nonprofit that has long had that school and other APS properties on its lists of endangered historic properties.

“Staff stresses again it would be shameful if not irresponsible for a city to demolish such a building instead of preserving the history that it represents,” AUDC staff said in an internal memo prepared in advance of the hearing.

“This is a no-brainer,” said APC Executive Director David Yoakley Mitchell about preserving the school for reuse. “This is not simply a Dudley Do-Right fantasy. With these buildings that are listed on the register… you really have the vehicle to do some amazing projects.”

APS did not have immediate comment, citing a focus on preparations to return to in-person classes next week after another COVID-19 pandemic closure. 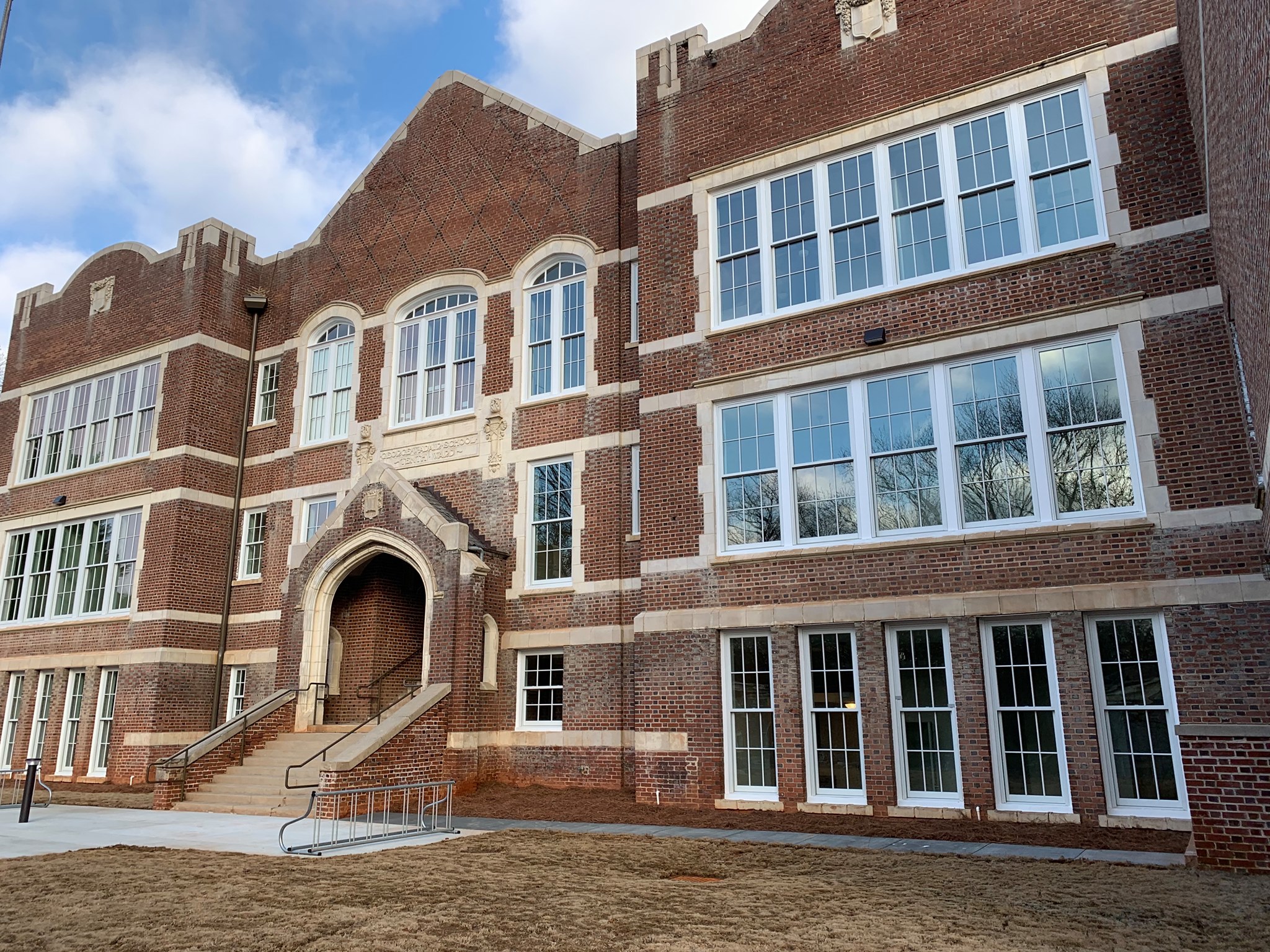 A publicity photo of the Academy Lofts, an adaptive reuse of the former George W. Adair Elementary School in Adair Park.

APS has a track record of historic, shuttered schools returning to use in praised preservation projects. Grant Park’s Roosevelt Historic Lofts and Academy Lofts are former schools turned into apartments. APS’s renovation of a long-closed school into the new David T. Howard Middle School won top awards last year from the Georgia Trust for Historic Preservation and the AUDC itself.

The AUDC staff memo about the Lakewood Elementary proposal suggests that there are many similar remake possibilities.

“Staff understands the abandoned building has become less desired because of the changing times of the area. However, any area can change, and this area is on an upswing,” the memo says. “It seems probable that another school will be needed in the area soon because of the rapid growth of all areas in Atlanta. Also, perhaps the building can be repurposed and be used as a shelter, recreational center or loft. There are multiple possibilities — anything but demolishing another historic resource in the Atlanta area.”

“But we need to be fair to APS,” he added. “These [reuse proposals] have to be case-by-case. They can’t be blanket.” However, he said, there should be a demolition review process with such “gateway” items as to whether the building has a historic designation like Lakewood Elementary does.

Shuttered since 2004, the school is a two-story brick structure in the Colonial Revival style on a roughly two-acre site partly bounded by Sawtell, Charleston and South Bend avenues. Its current form dates to 1932, but there is contradictory information about whether it is even older.

The AUDC staff memo dates the school to 1915 with a 1932 remodeling. The Historic District filing — which was compiled in 2002, when the school was still open — dates it to 1932 based on its cornerstone, and adds that an interior plaque indicated a previous school of the same name was established in 1911, possibly on the same site.

Regardless, the building — originally known as Lakewood Heights School — is locally and architecturally significant. It was designed by the firm Edwards and Sayward, whose many significant structures in Georgia and the Southeast include the McCain Library at Agnes Scott College and the exhibition buildings at the former Lakewood Fairgrounds near the school.

APS’s demolition application calls for salvaging unspecified items from the building, then removing everything, including parking lot pavement. The site would be graded and seeded. It would then become a vacant lot surrounded by a 10-foot-high, chain-link fence.

APS’s contractor on the project is KHAFRA, an Atlanta-based firm whose website touts its “award-winning expertise in breathing new life into cultural and historic sites” with adaptive reuse and renovation projects in Alabama. These include the adaptive reuse of a water-pumping station into a museum and the renovation of two historic buildings at Tuskegee University.

Mitchell — himself the parent of an APS student — said that Lakewood Elementary is part of the bigger picture of APS’s inventory of historic properties and how preservationists might aid in their future.

“Whatever we can do, however we can do it, by any means necessary, we want to be an advocate for their adaptive reuse, for their reactivation into the community,” Mitchell said. “We can do better.”