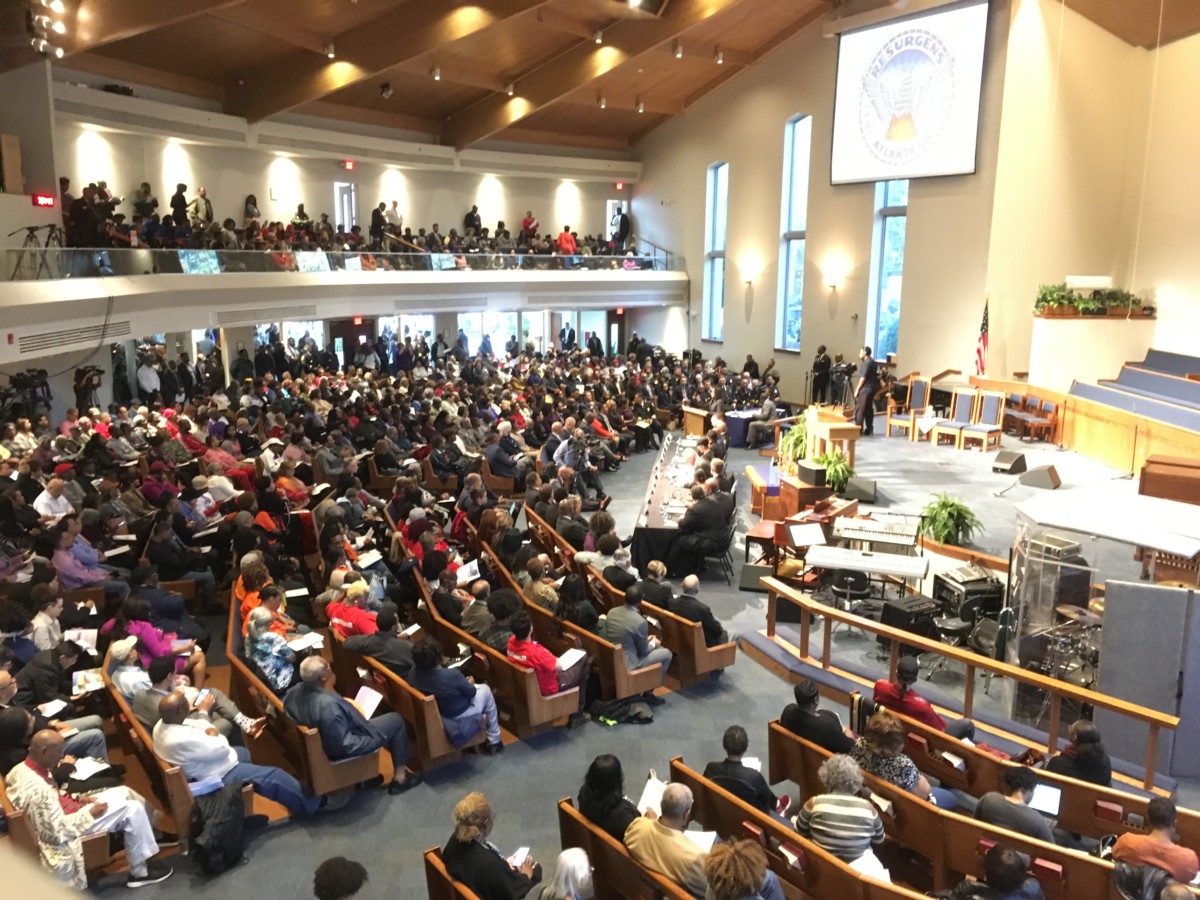 The mayor of Atlanta sat with her top staff and something near 100 written questions heavy on potholes and paving, as received from attendees at a Cascade town hall Tuesday night. But the first question was in the form of a chant from protesters, calling out the name of Jimmy Atchison, shot dead by a city police officer who’s now under investigation. 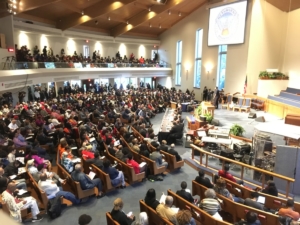 Atlanta Police Chief Erika Shields was just introducing herself to something near 1,200 people at Cascade United Methodist Church, when chants began to ring out.

“Say his name: Jimmy!” chanted a group of people who approached the front of the sanctuary, and repeated by folks all across it. “What do we want? Justice! When do we want it? Now!,” they continued.

Atchison was shot and killed by Atlanta Police officer Sung Kim on January 22. Law enforcement have said Atchison fled an apartment where a warrant was being served. An attorney for Atchison’s family has told the AJC that no gun was recovered from the scene.  Kim was working as part of a federal task force and the shooting is under investigation by the FBI. Normally, officer-involved shootings are investigated by the GBI.

A person yelled, “Why is he still on the force? He should at least be on administrative leave!”

“I and Chief Shields profusely apologize for not meeting sooner because it is part of an active investigation,” said Bottoms.

“But I will share with you: What I shared with the family is that in any way, if our actions or inactions in not meeting w them sooner has caused them any additional grief, then that is absolutely the last thing I would want to do to any family,” Bottoms said.

Shields said that she apologized to Atchison’s family. 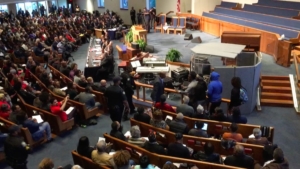 “They’ve had two months of no communication,” said Shields. “We were assuming that communication was occurring because that typically is the case when the GBI investigates.”

Shields said she owns that failure.

Officers escorted a dozen or so chanting people out of the sanctuary, and the town hall meeting continued according to the agenda.

Bottoms read something over 80 written comments or questions that had been submitted by the audience.

Watching from an upper balcony was Ty Williams. And his concerns matched what was on a lot of those cards.

“They have got to fix the streets,” Williams said. “It’s tearing up the cars.”

He wants the city to fix potholes, broken curbs and roads that need resurfacing.

Several of the comment cards mentioned Cascade Road — and folks wanted to know when it will all be resurfaced.

But city Deputy Chief Operating Officer Joshua Williams had to say he doesn’t know yet. Major works on Cascade are part of a pair of city bond programs he’s overseeing — and which don’t have enough money to do all that voters were promised in 2015 and 2016. He’s been overseeing public meetings, meetings with Council and the trimming of the project list.

“We’ll come back to City Council to present a formal plan that articulates specifically the timeframe,” Williams said. “We just don’t know at this time.”

After the meeting, Bottoms tweeted the answer to a question that got applause when it was read out: When will Childress Drive reopen?

Town Hall follow up: Childress Dr Bridge was originally scheduled to be completed in May. There were significant utilities issues and now demolition will begin in the next 3 weeks with the project scheduled for completion in early fall (September as it’s a five month project).

Bottoms also repeated a statistic that she’s mentioned before: that her administration has filled something like 18,000 potholes since January last year. That’s up from something like 2,500 in 2017. And also, she urged folks to call 311 with road and sidewalk maintenance complaints.

And the meeting was bookended by outcry.  As folks filed outside after the roughly two-hour meeting, maybe three dozen people stood on the sidewalk chanting, “Black lives, they matter here.”

Bottoms has another town hall meeting scheduled this month: