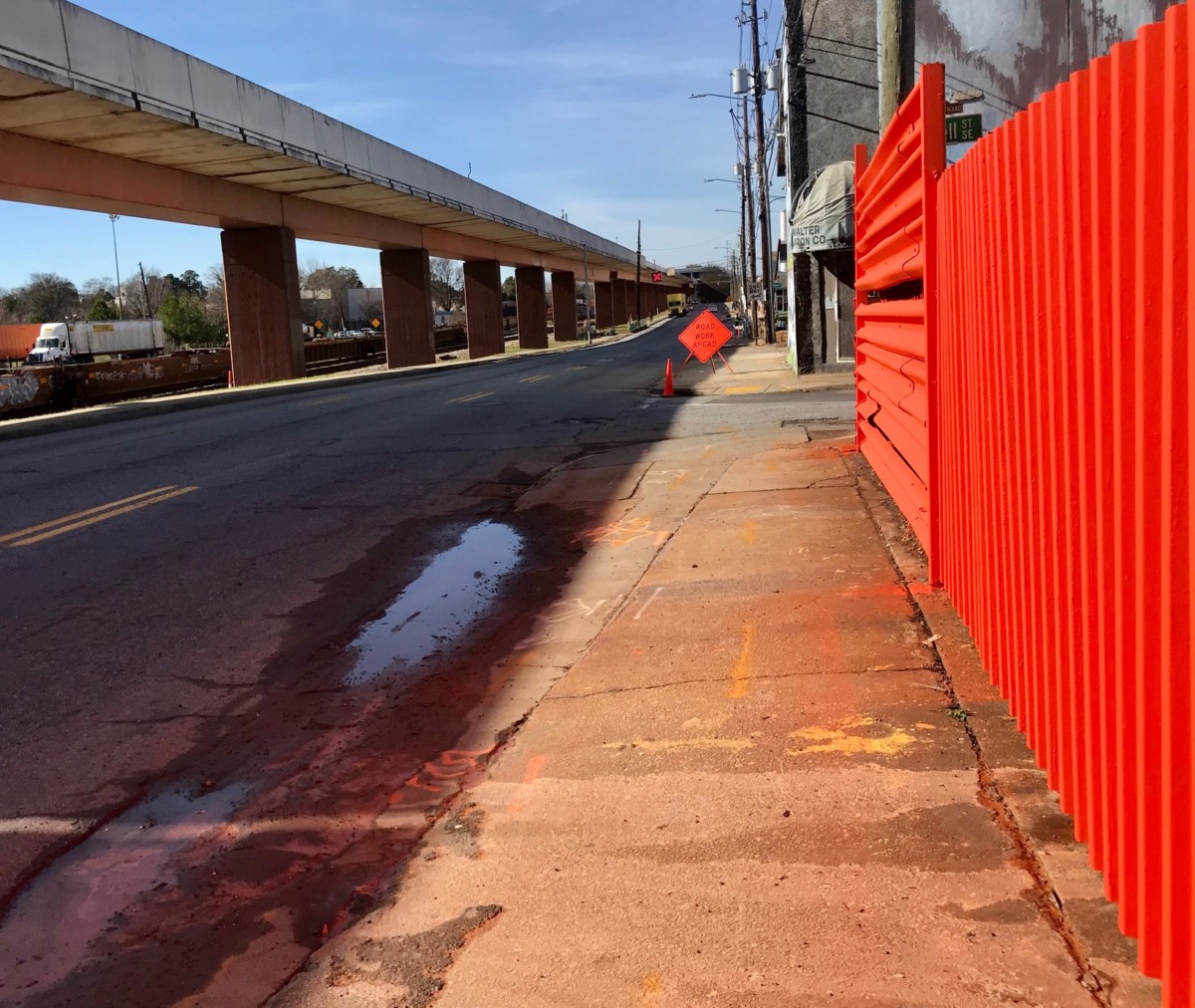 Atlanta promised voters hundreds of sidewalk, road, bridge and other public works if they’d approve two special programs in 2015 and 2016. Now comes the hard part: figuring out what to do with $940 million worth of promised projects and only $530 million in the budget.

“We just need pull the bandage off and let it start healing, and tell people, ’Hey we can’t get this project done here or there,’” said Council President Felicia Moore on Wednesday, speaking after a nearly 90-minute discussion in City Hall about Renew Atlanta and TSPLOST. 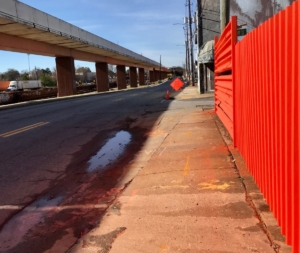 DeKalb Avenue is slated for a “complete street” upgrade, though the idea has run into objections and delays. Credit: Kelly Jordan

There are a lot of reasons why the city got to the place it’s in, according to Joshua Williams, the deputy chief operating officer brought on by Mayor Keisha Lance Bottoms in July, about seven months into her own term. He’s been looking in the books of both programs.

Renew and TSPLOST promised to start on a backlog of repairs and upgrades to city buildings like fire stations and other public places like roads and sidewalks. And the city promised new works like “complete streets,” reworking thoroughfares like DeKalb Avenue, Howell Mill Road with space for for cyclists, pedestrians as well as drivers.

All those projects, including some that are finished, come to about $940 million, by Williams’ presentation.

TSPLOST began day one with a nine-figure shortfall made up of tenths of a penny.

Atlanta City Council and the administration could have set up a sales tax of a half-penny or 0.4 of a penny.  They chose the smaller tax, but not a smaller project list.

“By only taking 0.4 of penny you reduce your ability to collect that additional $27 million to $25 million annually which would have gotten us to the $380 million that was articulated specifically for the project list,” Williams said.

Other causes: construction costs have gone up by something like 20 to 30 percent over the past few years, depending on the type of construction, Williams said. He put that cost at a new $130 million.

The “scopes” of projects have also expanded, he said. That means on a given job, the amount of work to do got bigger, maybe due to community demand for something more, or some new difficulty like discovering some buried utility blocking a plan. 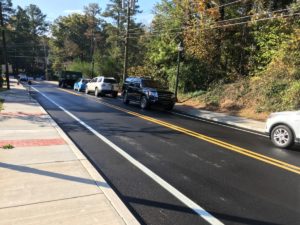 Lynhurst Drive, shown in a November, 2017 file photo when closed for a ceremony, has “complete street” upgrades: wide sidewalks, new lights and benches and maybe enough space to ride a bike, paid for in part with Renew Atlanta money. Credit: Maggie Lee

Another: projects have been added to the lists, projects were put on the list in the first place without any cash allocation assigned to them.

And projects weren’t prioritized from day one: nobody formally assigned a score on what’s the most important thing to do, the second most important and so on.

Williams said that any project that’s in the design phase will continue through design, but construction may be phased in some way.

The city’s now going to look at prioritizing projects. Williams said there are plans for nine public meetings throughout the city to ask the public how projects should be prioritized.

Some updates to the Renew/TSPLOST website have already happened under the headline “prioritization and rebaselining” — and there’s a public prioritization survey.  Williams also said more details were coming.

“This is more than a program recovery effort, this is an exercise of building and maintaining public trust,” said Williams.

“The mayor and her administration are committed to operating in a very transparent, honest and ethical manner as we earn your trust and continued support of this voter-approved program and any future TSPLOST programs,” he said.

At the end of the discussion, Moore made a request for more financial details.

“You need a true full accounting of every penny that has been spent whether it’s administrative cost or anything,” she said.

And some members of the public have been concerned enough about their communities’ projects that they’ve been showing up to public meetings to ask where their projects are.

Midtown resident Ivan Schustak said he was an “advocate and proud voter” for Renew years ago, and that he cheered to see Monroe Drive show up as a complete street project, with improvements for pedestrians and cyclists.

This year, Schustak was on foot near his home one night when he was hit by a car trying to turn left from Monroe Drive.

“I nearly died that night because Monroe Drive caters almost exclusively to those with the privilege to drive at the expense of those of us who cannot or chose not to drive,” he told Council members.

The Atlanta Bicycle Coalition is probably the most active supporter of complete streets in Atlanta, and say those plans directly address dangerous conditions. They say they’re ready for a new start on Renew and TSPLOST following the principles of safety, mobility and affordability.

“For years, Atlantans have invested their time to attend and give feedback at public meetings about complete streets, but instead of greater mobility, in return, they’ve gotten long delays,” a statement from the group’s executive director Rebecca Serna read in part.

Renew has gotten dinged by city auditors several times over the years. Fire station works have gone over budget, a sample of road repavings happened with incomplete documentation or money, and contracts didn’t comply with best practices. 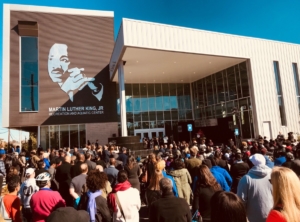 Last year, the city put out a request for a construction audit of the Martin Luther King Jr. Recreation Center and Aquatic Center, which was in part a Renew project.  A $50,000 contract was awarded for that audit this summer, but no audit has not yet been published.

And while Council members thanked Williams for his presentation, there were a few misgivings about the idea of yet more public meetings. The public is liable to get fatigued, for one, having already gone through Renew meetings, as well as public meetings on other things like MARTA money and BeltLine planning.

“We’ve got to put some shovels in the ground,” said northwest Atlanta Councilman Dustin Hillis, who’s trying to make sure Howell Mill Road works don’t fall off the list.

Citywide Councilman Andre Dickens said this goes back to his argument for a city Department of Transportation that would coordinate all these tasks and all this planning under one roof.

Renew and TSPLOST were never meant to fix all of Atlanta’s overdue public works, a list that now comes to well over a billion dollars.

Council members and mayors have known for years that to get the whole list done, they’d need to go back to voters to ask for another nine figures.

Hence the interest in Renew and TSPLOST.

“We’re not going get another one passed if we don’t get this right,” said Moore.