With additional reporting by Tom Baxter.

After considerable deliberation about the heritage the Porsche car company shares with Nazi Germany, the Atlanta City Council today is poised to rename Henry Ford II Avenue to Porsche Avenue.

Councilmembers leveled a line of questions at Porsche’s corporate lawyer during a public hearing last week that went to the heart of the company’s social conscience today. In the end, a majority on the council’s City Utilities Committee endorsed the proposed name change.

“I saw some pictures that were initially disturbing,” Councilmember C.T. Martin said, possibly referring to the myriad of photos available on the Internet that show the father of the company’s founder standing with Adolph Hitler and other Nazi leaders.

Martin went on to make the motion to approve the proposed renaming. The name will be Porsche Avenue, following a decision to drop the founder’s first name – Ferdinand – because he shares it with his father.

The father designed a manufacturing plant that produced war materials including Tiger tanks, according to a paper by a Paul A. Schons, a professor at the University of St. Thomas, in St. Paul, Mn. That plant had been intended to build Germany’s version of Ford cars, which Porsche had designed, according to Schons.

Hitler was so impressed by Ford’s accomplishments that he kept a picture of Henry Ford over his desk. According to Schons’ portrayal of events:

Martin has been an outspoken critic of discount chains moving into certain portions of the city, but evidently found enough in favor of the Porsche site to support the name change advocated by Porsche’s corporate attorney, Joseph Fotz.

“They answered our questions very clearly: What kind of citizen are they going to be now,” Martin said after a public hearing last week. 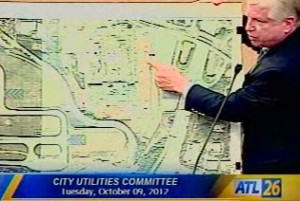 Joseph Folz, Porsche’s corporate lawyer, points to a map during a City Utilities committee meeting to show the location of the proposed renaming of Henry Ford II Avenue to Porsche Avenue. Credit: City of Atlanta

Folz told the committee that Porsche: Pays $200,000 to a corporate-sponsored charitable organization named Porsche’s Care Network; Has a diverse workforce that includes 20 percent non-whites and is working to increase its staff diversity; Is filling many of its jobs with Atlanta-area residents, as opposed to relocating workers from Porsche offices in other cities.

It was committee Chairperson Natalyn Archibong who clarified the issue of Porsche’s heritage during the debate that followed the public hearing: “That was shocking, and a point of concern to many people.”

Folz response indicated he had prepared for the question.

Only one worked on contracts awarded by the Third Reich, he said. The sport/racing car company was founded by Ferry Porsche, who was son of Ferdinand Porsche. The founder’s son, Ferdinand Alexander Porsche, was more artist than engineer and was involved with designing the iconic 911, Folz said.