You’ve got to be kidding.

That is my initial reaction to the news that a new storage facility is being proposed along Monroe Drive – steps away from a major node of the Atlanta BeltLine, Piedmont Park and the Virginia-Highland community.

The Atlanta Botanical Garden has orchestrated a deal to swap land that currently houses a storage unit facility along Westminster Drive near Piedmont Avenue with 1.67 acres of land at 1011 Monroe Dr. to build a replacement facility. 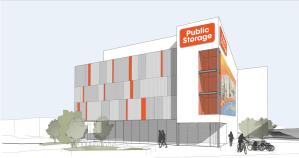 A design illustration for the proposed Public Storage self-storage facility in Virginia-Highland that is a key part of the Garden’s expansion plan, as shown in a City permit application.

The land swap is part of an ambitious expansion of the Atlanta Botanical Garden which aims to create a new gateway to the garden in an area across from Ansley Park. The project is estimated to cost north of $35 million.

While people are applauding the proposed expansion plans for the Garden, community leaders in Virginia-Highland expressed great concern about the impact a new storage facility would have at one of the most important intersections along the BeltLine’s Eastside Trail.

“A storage facility is not the best use or an appropriate use for land that’s so close to the BeltLine and Piedmont Park,” said Jenifer Keenan, a community leader in Virginia-Highland. “There’s already one unsightly storage facility in this area. Adding another one will further diminish the beauty and vitality of this section of the BeltLine, Piedmont Park and Virginia-Highland.”

The Atlanta Botanical Garden bought the Monroe Drive property – which used to house the Cantoni furniture retail store and previously Illuminations – in May. As late as early November, the Garden told SaportaReport it had bought the land for investment purposes and that it was “not aware of any specific plans” for the property. 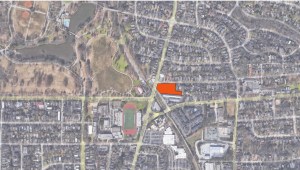 Map shows the property where the new storage facility would be built according to the permit application.

The Virginia-Highland neighborhood was notified of plans for the new storage facility on the Wednesday before Thanksgiving with a tight deadline of Dec. 6 to respond.

“We have had a lack of time to investigate it,” said Jennifer Graham-Johnson, who was still on her Thanksgiving holiday on Monday. The community is planning a meeting in the next several days to discuss the project.

Jack White, a resident who works on planning for the Virginia-Highland Civic Association, questioned why the Atlanta Botanical Garden didn’t communicate with the neighborhood after buying the land in May to work with the community.

White questioned whether filing the application for a Special Administrative Permit on the day before Thanksgiving was a coincidence. 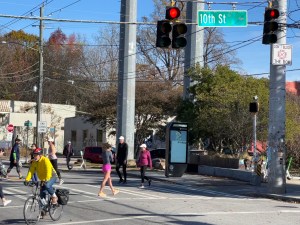 The new storage facility would be built on the land where a white and red building now sits in the middle of this picture, just feet from the Atlanta BeltLine. (Photo by Maria Saporta.)

“The first thing we’re trying to do is to have more time to reflect on this,” White said. “I find it infuriating that we have to act so quickly. We just need time to understand the impact it’s going to have on an extremely complicated part of the BeltLine.”

Tate Chalk, a resident who lives a couple of doors up Cooledge Avenue from the proposed storage facility, said the property could be used for “a million things” other than a building “that just sits there” for people to store their stuff.

Aaron Fortner, a planning consultant who works with the Virginia-Highland Civic Association, said a storage facility was not part of the vision for the BeltLine master plan. Originally, the BeltLine Overlay District — an area about a half mile on either side of the BeltLine — was supposed to restrict storage facilities, but that was taken out of the legislation at the last minute. The project still has to go before the BeltLine Design Review Committee, but that’s only an advisory gesture.

Fortner, however, is hoping to have conversations with the Atlanta Botanical Garden and other stakeholders to see if other ideas will be considered. 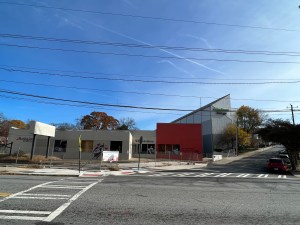 The Monroe Drive storage facility would be built on the site of the white and red building in the middle of this shot. (Photo by Maria Saporta.)

Fortner hopes to appeal to the Garden’s civic nature. “They should be about the greater good, not just about the property on Piedmont,” he said. “This should be something the Atlanta Botanical Garden could be proud of.”

What’s most troubling to me is the city compromising its commitment to quality urban design.

The Atlanta City Design – championed by Tim Keane, the City of Atlanta’s former planning commissioner, and Ryan Gravel, who inspired the Atlanta BeltLine – was aspirational. It called for the development of a world-class city where urban design would spark an improved quality of life. We need to create special places with a “public realm” that invites  people to enjoy a live-work-play environment – a strategy already taking hold along the BeltLine’s Eastside Trail.

Plopping a lifeless storage unit facility at one of our most fragile intersections will not advance the quality of life we long for in Atlanta. Our civic leaders should do all they can to make Atlanta as vibrant a city as it can be. And that doesn’t include yet another storage facility at the critical gateway to Piedmont Park and the Atlanta BeltLine.

Note to readers: As I write this column, I’m fully aware of the powers-that-be who are championing the Atlanta Botanical Gardens’ plans. I have run into that buzzsaw before when I opposed the building of the parking garage in the middle of Piedmont Park. Although I realize the muscle of the people behind this proposal is powerful, I cannot in good conscience remain silent on such an important urban design issue for Atlanta. Civic leaders, we can do better than this.

Previous Article
Georgia gripped by a frenzy of glomming in runoff’s closing days
Next Article
Advancing The BeltLine’s Next Park, Equitably