A photo of a tree felled for Atlanta public safety training center site preparation as shown in an April 2021 DeKalb County inspection report.

Persistent complaints of unpermitted site work for Atlanta’s public safety training center appear to be unfounded – but are also how DeKalb County planning officials learned about work on the secretive project, according to documents obtained by SaportaReport.

Belief in the illegality of tree-cutting at the City-owned former Atlanta Prison Farm site on DeKalb’s Key Road is one driver of protests against the facility, some of them involving lawbreaking that planners now cite as a reason for even more planning secrecy. However, DeKalb Planning and Sustainability Department documents show, no permits were needed for the prep work so far. And the Atlanta Police Foundation (APF), the facility’s lead planner, early this month applied for a land disturbance permit, which is required for large-scale prep work.

With such limited information the situation has been confusing, including to at least one member of the City’s Community Stakeholder Advisory Committee (CSAC) reviewing the project. Nicole Morado, who last year also was among the early filers of tree-cutting complaints, says she believed no permits were needed for the facility at all and did not know the APF — which operates the CSAC — had applied for one.

Transparency has been an ongoing point of controversy for the facility since its secretly chosen location on City-owned land in unincorporated DeKalb was announced last year. Accessing the county documents about permitting complaints had transparency issues as well. The county delayed a response to SaportaReport’s open records request for over six weeks, partly by a communications official directing the documents to be delivered to him instead, and only provided them after being warned to do so by the Georgia Attorney General’s office.

Besides general public controversy, the training center site has been targeted by a variety of protesters apparently loosely affiliated under the name Defend the Atlanta Forest. Many of the protesters have been law-abiding or social-media focused, while others have trespassed at the site and vandalized the headquarters of APF and its construction contractor, Reeves Young. APF and the Atlanta Police Department are ramping up the characterization of the protesters as a major threat to the facility worthy of FBI investigation and the withholding of construction details. Some protesters have claimed success in forcing Reeves Young to quit the project, while APF says the company’s prep work contract simply expired and new construction bidding will begin soon. Reeves Young declined to comment.

On-site protests have often been coupled with claims that the APF itself is breaking the law with illegal work. On Jan. 28, according to DeKalb County Police Department (DCPD) records, 30 to 40 people gathered at the site for an “anti-police and forest defender protest.” Four people were arrested and charged with criminal trespassing and one more charged with felony obstruction, the records say. On the same day, someone using the name Defend the Atlanta Forest issued a press release that referred to the protest and claimed the prep work might be breaking the law due to a lack of permits.

Such protests and general public complaints have spurred DeKalb planning officials to investigate and are how they learned of the project’s initial work, the county documents show.

Tree removal in April 2021 sparked complaints that initially confused the project with another nearby controversial site, the Blackhall Studios film complex, as the training center plan was still a mysterious surprise. Internal emails and inspection reports show that at least some county planning officials did not know the City owned the land, that any type of work was underway, and that it had something to do with the training center, which an inspector deduced after reading a news story.

Even Andrew Baker, the county’s Planning and Sustainability director, was not sure what it meant at first. “If the City of Atlanta is planning a police training center and the site is in unincorporated DeKalb, are permits required from DeKalb for preliminary geo tech [geotechnical] work?” he asked in an April 2021 email to his staff. “For LDP [land disturbance permit]? For building construction? As a government, are there any exemptions to any rules and regulations?”

The county eventually concluded the project would need a land disturbance permit to begin major work. Meanwhile, an April 22, 2021 inspection report found the preliminary tree removal, assumed to be conducted for soil testing, to be OK. The report says the work “was done in a manner that took into account minimizing any environmental impact at this stage of development and the work done was not [in] violation of DeKalb County code. From a standpoint of best practices and common procedures, the work done was typical and prudent for any large-scale development.” 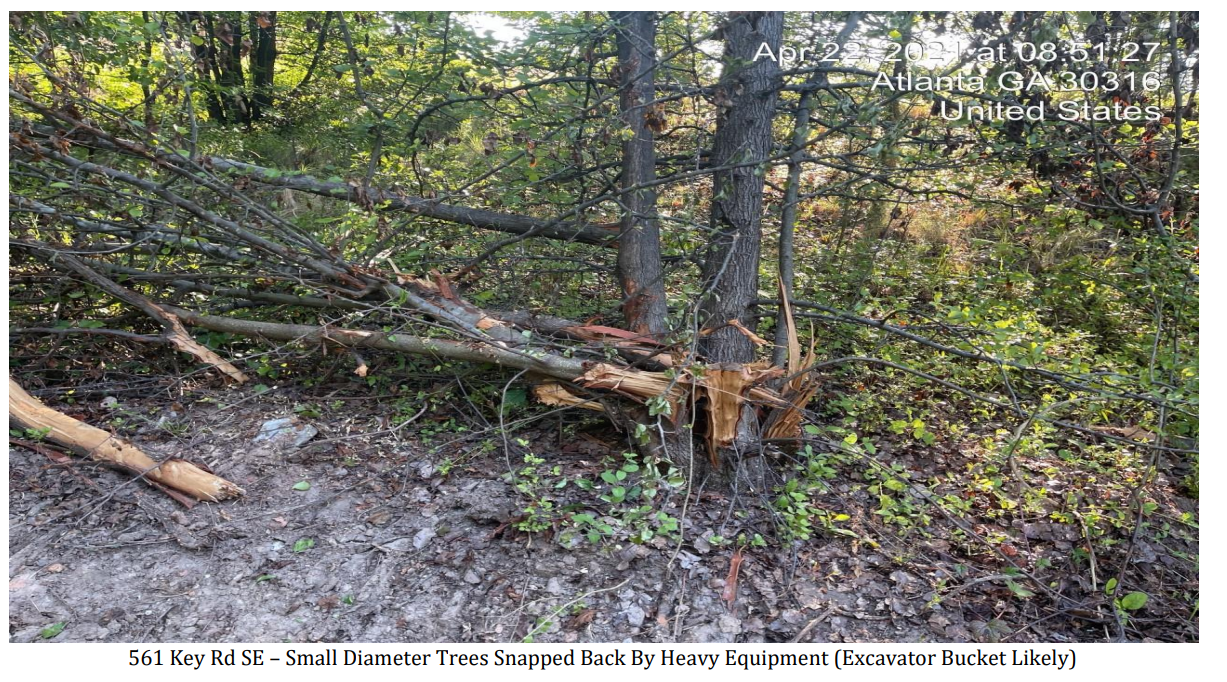 A photo of trees damaged by public safety training center work as shown in an April 2021 DeKalb County inspection report.

The minimal impact was described as the removal of many small trees in areas estimated to be under 1 acre combined. Three larger trees — 10 to 12 inches in diameter — had been removed, but the inspector found evidence of vehicles going around other large trees to avoid damaging them.

A challenge cited by inspectors was how to distinguish recent work from other activities, new and old, including evidence of all-terrain vehicles driving through the forest. The county documents included some old permits that indicate the 2021 Disney movie “Jungle Cruise” – identified under its filming code name “Elixir” — was partly filmed on the site and cleared some of the area.

The documents show that complaints and protests repeatedly led to questions from county officials and inspections by the planning department, indicating they were out of the loop on the work and its schedule. One example came on Jan. 18, when DCPD informed officials about Defend the Atlanta Forest’s social media posting complaints about tree removal and urging people to visit the site, “presumably to try to disrupt the people doing work.” That triggered an email chain in which county Chief Operating Officer Zach Williams asked whether the project had tree removal permits. An inspector again visited.

Morado, now a CSAC member, was among the early complaint-filers. On April 20, 2021, she sent county officials an email complaining of the “upsetting destruction” on the site as seen from her Starlight Heights neighborhoods. She said it was “crazy” for Atlanta police to use a DeKalb site and worried about “overly aggressive police training tactics” being taught there.

Morado this week said her thoughts about the facility have not changed since she joined the CSAC last fall, though today, “I’d say the development team has made good efforts in minimizing the destruction…” But six months into the CSAC review, Morado the project was exempt from permits and did not know about the land disturbance permit application. “I was under the impression that APF didn’t have to follow any permitting or standard development process,” she said.

APF Chief Operating Officer Marshall Freeman told the CSAC at its April 26 meeting that exact construction timelines and dates would be kept secret from the committee due to concerns about the protesters.