Plenty of people get their exercise and fresh air walking the South River Trail at the Intrenchment Creek trailhead —  it’s got big trees, wildlife; it’s peaceful. They said so at a public meeting where DeKalb produced slides saying it would be better to trade away that land for some other nearby. 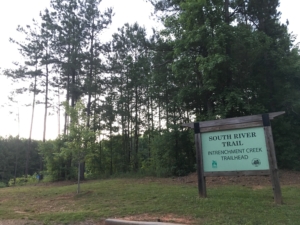 Right now, there’s about 125 acres of public green space between the creek and Bouldercrest Road.  To the north and east are about 55.65 acres of vacant land owned by Blackhall Studios. To the southwest across Constitution Road is other studio land that’s already built up.

What’s on the table is a swap: DeKalb would give 48.104 acres of the existing green space at Constitution and Bouldercrest to Blackhall Studios. That includes some of the hiking area as well as the field used by folks flying radio-controlled model airplanes and helicopters.

In return, the county would get Blackhall’s land on the north and northeast sides of the park.

The studio wants to expand, and would end up with plots a bit closer together under this deal.

DeKalb County, as its staff presented the deal, would get a net gain of about 7.5 acres and could develop the new assemblage into a regional park with better connectivity to Gresham Park and amenities for more kinds of users, beyond mainly walkers and RC pilots.

But some say it’s a bad trade and that the county’s presentation was one-sided.

More than a dozen people spoke against the swap at a public meeting on May 20.

Jacqueline Echols said every tree that’s at the trailhead park is critical stormwater infrastructure. In plain English: from the leaves that intercept raindrops to the roots that soak up water, those trees help prevent erosion and slow down surges of stormwater runoff.

Stormwater can wash pollutants, debris and sediment into creeks, cutting the water quality there and eventually in the river she’s trying to restore and protect, as board president of the South River Watershed Alliance.

“Stormwater runoff is made worse by development because it routinely covers the surface of the earth with hard surfaces,” Echols said.

A new development, with impervious surfaces like roofs and parking lots where there are now trees would cause an enormous amount of runoff, she said.

The trail now is mainly wooded and quiet — some would rather see a park with more amenities, if the county would actually install and fund those amenities. Credit: Maggie Lee

Joe Peery gives guided tours of the green space and is also a longtime advocate for turning the adjacent old Atlanta Prison Farm into a park. Peery pointed on the map to the rectangle that the county would trade away.

Then he pointed further north, to the land the county would get in exchange.

“Everybody knows what’s up here: it’s just a giant field that was mowed for a development and then it bottomed out,” Peery said. The other side of Bouldercrest has got impassible swampy areas, he said.

A handful of people spoke up for the deal, most associated with business organizations.

Beverly Dabney is on the board of the Metro South Community Improvement District Board and has lived and worked in the community some 40 years.

“We in south DeKalb have worked long and tirelessly for economic development — this is an opportunity that doesn’t exist in many places,” Dabney said.

She also said she’s felt unsafe in the park as it is — and this is a chance to design something for the future that people from throughout the region would want to come visit.

Blackhall Studios Chairman and CEO Ryan Millsap said in an interview that he supports the swap — though he’s quick to say he didn’t come up with it.

Millsap said he thinks the professionals who the county hired to study the deal have offered wise counsel — and that the swap would result in better traffic flow and better park land in the park system.

“Nobody’s trying to do anything that’s bad to anyone else,” Millsap said.

But land swap or no, he does intend to expand his studio. 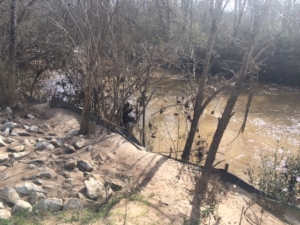 A silt fence keeps some of the dirt out of a portion of Intrenchment Creek. But the fight against pollution is ongoing in south DeKalb’s waterways. Credit: Jacqueline Echols

But there are more parties to this. DeKalb County has this green space in part because of philanthropists — who stepped up on the condition that it has to remain public space.

The Trust for Public Land acquired the land with the support of the Arthur M. Blank Family Foundation nearly 20 years ago.

The green space covenant could be relaxed. But as for right now, TPL is listening to the conversation with an ear toward the needs and wants of the community.

And that conversation is what’s happening now: county staff are set to take the public comment into account and submit a draft report to county CEO Michael Thurmond. He may ask for more information, or he may pass the report to the county commission, which could authorize negotiations for the swap, or not.

Proposed land swap: Three parcels of land owned by Blackhall Studios (in orange) for part of DeKalb County’s green space near Intrenchment Creek. Gresham Park is shown on this map for context, but it is not part of the swap.

Previous Article
Based on the data, the future is promising
Next Article
Kirkwood Spring Fling 2019 by Kelly Jordan