Rosalyn and Jimmy Carter at the last Braves game at Turner Field in 2016. (File/Photo by Maria Saporta)

Happy birthday to Jimmy Carter, the only Georgian yet elected president. He turns 96 on Oct. 1.

If you need an absentee ballot for voting by mail in any county, visit Georgia’s ballot application page.

Fulton County wants you to vote early, if you want. Check out locations, hours, and how-tos.

The Greater Atlanta COVID-19 Response and Recovery Fund plans to issue $5.5 million in grants to nonprofits for pandemic response in the next 30 to 60 days.

The fund, a joint effort between the Community Foundation for Greater Atlanta and United Way of Greater Atlanta, has already distributed some $18.4 million to metro organizations.

The application and materials are posted on the fund’s website.

The fund is prioritizing work on education, food security, housing and mental health. It’s also looking for applications from smaller-budget nonprofits responding to local needs and those founded or led (or both) by Black people, Indigenous people or people of color.

“We launched the COVID-19 Fund in mid-March when the significant challenges brought on by COVID-19 were just being felt in our region,” said Frank Fernandez, president and CEO of the Community Foundation for Greater Atlanta, in a press release announcing the new round of grant applications.

“Our initial response was triage, directing funds to organizations that could scale a large response to critical needs such as food and childcare with broad geographic reach. We recognize that the region is still challenged and smaller nonprofits, especially, are well-positioned to serve harder-to-reach individuals and families in underserved communities,” Fernandez said. 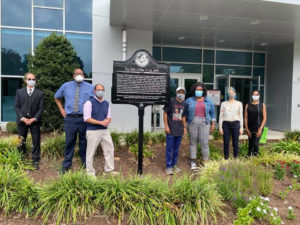 A new marker outside the Augusta-Richmond County municipal building commemorates the death of a black teen in custody some 50 years ago and what happened in the community next. It reads:

On May 11, 1970, Augusta became the site of Georgia’s largest uprising during the Civil Rights era. Hundreds of black citizens gathered at the Municipal Building to demand an investigation into the beating death of Charles Oatman, a 16-year old African American, in the county jail. When white officials resisted, long-simmering grievances about racial injustice boiled over. Some protesters targeted Chinese-American and white-owned property for destruction. As the riot escalated police fired shotguns, killing six and wounding dozens. The Georgia National Guard occupied Paine College and black neighborhoods. Local trials convicted nearly 100 protestors. Despite an FBI investigation and federal trials of two white police officers, no official was convicted. “Kent-Augusta-Jackson-S.E. Asia” later became a national rallying cry, and the protests galvanized activism and accelerated desegregation in Augusta.

The Georgia Historical Society announced a “virtual” dedication of the marker last week.

“Very few people outside of Augusta and academia know of this uprising,” said Corey Rogers, Historian at the Lucy Craft Laney Museum in Augusta and member of the 1970 Augusta Riot 50th Observance Committee.

Renee Glover is the newest person to join the advisory board of Jacksonville, Florida-based Azimuth GRC, a software and tech firm specializing in regulatory compliance.

Glover led Atlanta’s housing authority for almost 20 years until 2013. Her past and present board resume includes service with Fannie Mae, Enterprise Community Partners, Habitat for Humanity International and others.

“We are thrilled to have Renee’s expertise at a time when Azimuth GRC is revolutionizing the world of regulatory compliance and expanding its services to new and expanding clients,” said Azimuth GRC Founder and CEO Rohin Tagra in a press release welcoming Glover.

By the start of the fall 2021 semester, Emory hopes to have hired a new provost and executive vice president for academic affairs.

And other folks are invited to give input at the school’s search page.

Columbus-based insurer Aflac is the latest recipient of the goBeyondProfit Champion Award, which is awarded by a network of Georgia business leaders with the aim of spurring corporate giving and good acts.

The company’s primary philanthropic cause since 1995 has been fighting childhood cancer. Since that year, according to the company, Aflac and its independent sales agents have contributed more than $146 million to treatment and research for cures.

Aflac’s “deeply ingrained approach has resulted in support for countless children and families in the face of crisis and has contributed to positive reputation and global growth for the company,” wrote goBeyondProfit founder Rick Jackson in an email announcing the award.

This investment plus a prequel $100,000 investment makes ACE one of Fifth Third’s biggest organizational partners.

Promotion from within at Cadence Bank

Yvonne Davis will take a new job at Cadence Bake, as senior vice president and regional president of East Georgia for the Atlanta-based bank.

“Her wealth of banking knowledge and drive to make a difference in our local communities shines light on her motivation for success, both for her clients and the broader community,” said Spencer Strickland, executive vice president and president of Georgia Community Banking, announcing the appointment via press release.

Davis started her 37-year banking career at Bank One.

October 6, all day: The Atlanta Business League’s 36th annual Super Tuesday Conference goes virtual. This year’s theme: Working together to prepare, pivot and perform.  Atlanta-based author and playwright Pearl Cleage will be inducted into the Women’s Hall of Fame to kick off the day. Register here by Oct. 3.