Atlanta, early voting is wrapping up, and Election Day is almost here. If you plan on submitting your ballot early, be sure to visit the ballot box by Friday, Oct. 29. Click here to find your polling place.

Nov. 2 is Election Day, and polling stations will be open from 7 a.m. to 7 p.m. city-wide. Visit your Georgia My Voter Page for more information.

Still unsure of who to vote for? Check out SaportaReport and Atlanta Civic Circle’s 2021 Voter Resource Guide to meet the candidates and see their stances on the city’s hot topics.

More mayoral candidates have responded to the “Buckhead Pledge,” a City Council member’s list of 10 policy proposals that he says would address the controversial movement for the neighborhood to become its own city.

Gay previously responded publicly, saying she supports all of its items “in principle” but that her belief is in citywide responsiveness.

In a recent constituent newsletter, Matzigkeit reported responses from Dickens, Moore and Reed. All three essentially said they would either execute or work toward the policy items in the pledge. The one exception was Dickens’ hesitancy, pending further information, to commit to giving community improvement districts the power to put their own construction projects out to bid.

The answers varied in detail. Moore provided a brief checklist arranging the policy items by ones she “will pledge” to do and those she would “work towards.” Dickens gave point-by-point commentary. Reed gave a lengthy narrative that concludes, in a message to residents, “I look forward to working with you and all of your neighbors to implement solutions to the issues stated in the Buckhead Pledge.”

The effect on Buckhead voters remains to be seen. Bill White, chairman and CEO of the pro-cityhood Buckhead City Committee, has said that Atlanta has fundamental governance problems and that a “new mayor will solve nothing.” 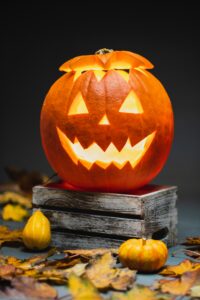 What goes bump in the night?

Halloween is here, and you know what that means – it’s time to don your spookiest outfit, stock up on fake blood and eat too much candy.

Still need plans for the scariest day of the year? Look no further: 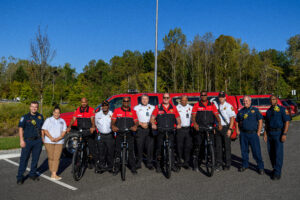 For first responders, a fast response time is key. Aventon, an LA-based eBike company, gifted five bikes to Atlanta’s firefighters to give them another tool to protect the city.

The bikes can go as fast as 28 MPH and travel for 40 miles after one charge. The eBikes will be stationed at Hartsfield-Jackson Airport, and the city’s firefighters and EMTs can use them to reach those in need more quickly and work for large events around the area.

“We already rely on bicycles as a way to get to people faster and more efficiently in highly trafficked and crowded areas like our airport, the busiest in the country,” said Chief Roderick M. Smith in a press release. “The eBikes have a pedal-assist so our firefighters can save their energy for helping people instead of using that energy to pedal long distances as they patrol the area.”

“We are thrilled to provide this gift to the heroes of Atlanta,” Adele Nasr, Aventon’s Chief Marketing Officer, added. “When we heard the Atlanta Fire Department was looking to upgrade to eBikes, we knew it was time to step in and help.” 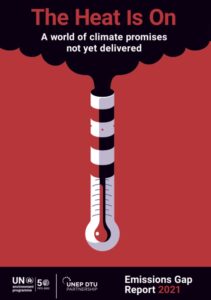 The U.N.’s Emissions Gap Report, issued Tuesday, offers a glimmer of hope on climate warming: ‘We should not despair.’ (Image courtesy of unep.org)

Two state House Democrats on Thursday urged Congress to pass President Biden’s revised Build Back Better spending program, which he unveiled in advance of his trip to a U.N. climate conference in Scotland.

Biden released his new plan Thursday morning. On Tuesday, the United Nations released its annual Emissions Gap Report, showing the global temperature rise is on track to rise by 2.7C by the end of the century, nearly twice the aspirational goal of 1.5C in the Paris Agreement.

State Rep. Angelika Kausche (D- Johns Creek) and Rep. Teri Anulewicz  (D-Smyrna) called for passage of the bill. Both said air quality needs to be improved to improve public health. The event was hosted by Climate Power, an advocacy group where Stacey Abrams serves on the advisory board.

“Georgians have proven how agile we are, and clean energy is one way,” Anulewicz said. 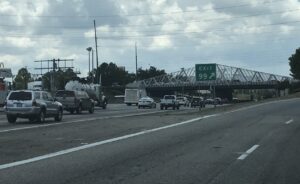 Transit remains an interest for commuters who travel I-85, including this intersection with Jimmy Carter Boulevard. (Photo by David Pendered)

Transit remains on wish list for I-85 in Gwinnett County: GDOT survey

A new survey shows transit on I-85 in Gwinnett County remains a popular potential solution to ease congestion on a highway that serves more than 300,000 vehicles a day, making it one of the busiest in the state.

The research is from the first stage of a multi-year study into a potentially major project to improve mobility on I-85 between I-285 and I-985. Final recommendations are due in late 2023.

Survey results provide sufficient support for further studies of various modes of transit that could be implemented in the corridor – heavy rail, the type of a MARTA train; bus rapid transit, the type MARTA is developing in Downtown Atlanta; and arterial rapid transit, a rubber-tire vehicle that travels in dedicated and shared lanes, according to a presentation at the Oct. 21 meeting of the board that oversees the Georgia Department of Transportation.

Kathy Zahul, GDOT’s assistant director for strategic systems and handling, cited three trending topics that garnered the most comments in the phase-one survey, which attracted 214 responses:

Erskine Fountain before and after restoration. (Photos courtesy of The Georgia Trust for Historic Preservation)

In a continued effort to maintain the city’s oldest park, the Georgia Trust for Historic Preservation gifted the Grant Park Conservancy $2,500 to restore the area around the Erskine Fountain and install a cobblestone walkway.

The fountain was donated to the City of Atlanta in 1896 to celebrate John Erskine, a judge who served on the Federal District Court of Georgia after the Civil War and is buried in Oakland Cemetery.

The fountain itself, along with plumbing and bronze casting, was restored thanks to a previous donation from the Georgia Trust.

This round of funding is provided by the Callahan Incentive Grant, a matching grant given to nonprofit and government organizations that are rehabilitating historic sites in the state. 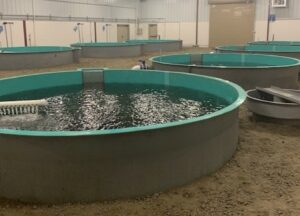 Almost all the water from these circular tanks at Lake Burton’s fish hatchery is to be recycled following a facility upgrade. (Photo provided by GDNR)

To better manage water resources, the state fish hatchery at Lake Burton has been updated with sustainability enhancements to recycle water for use in downstream raceways.

The new design for water flow provides for nearly 100 percent of the water that flows from tanks, where fish are grown, to be cleaned and reused downstream, according to a statement from the Georgia Department of Natural Resources. Water in the tanks contains noxious byproducts of fish.

The drought-resistant feature was included in the two-year renovation project at the recently reopened hatchery. Other upgrades include a new dam/water intake system, new buildings and new paving on the parking lot at the boat ramp.

The hatchery opened in 1938 and is one of three hatcheries DNR operates to produce about 1 million trout to stock waterways. About 100,000 people fish for trout in Georgia, according to DNR. 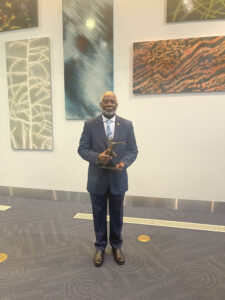 Dr. David Satcher was selected for the 2021 Fries Prize for Improving Health, along with $60,000 for his work championing health equity and fighting health disparities.

Satcher is the 16th U.S. surgeon general, former director of the CDC and founder of the Satcher Health Leadership Institute at the Morehouse School of Medicine. SHLI aims to create change within policy and equity, focusing on the political determinants of health, health system transformation and mental and behavioral health.

Satcher has received 50 honorary degrees through his work spearheading research about tobacco use, mental health and childhood health, to name a few.

“Dr. Satcher’s teaching and achievements have been inspiring to thousands of Americans who have learned from him and whose lives have been impacted by his work,” said Regina Benjamin, 18th U.S. surgeon general and one of Satcher’s former students who advocated for Satcher’s nomination for the Fries Prize, in a press release. “His career has raised awareness and affected system change to help eliminate health disparities and achieve health equity in the United States and globally.”