Two mobility studies are underway in Gwinnett County and each has hallmarks of bringing concerns of local communities, and the environment, to the table earlier in the process than they were previously included. 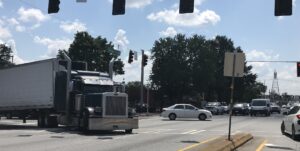 Trucks and passenger vehicles share the roads around Gwinnett Place at an intersection west of I-85, near Duluth. (Photo by David Pendered)

These new processes were in place before the Biden administration announced various transportation measures, including some cited in a community reinvestment proposal.

The goal of the new processes is to hasten the planning for projects intended to ease traffic congestion, improve safety and evaluate future transit options.

Previous methods of planning for transit and transportation could result in plans being delayed because the public was not consulted until plans were fairly complete. An agency may present a nearly complete concept, only to have opposition and possibly lawsuits arise. One benchmark is a mandatory federal environmental review – in 40 years the time to complete the review has tripled, from 2.5 years in the 1970s to 6.5 years now, according to a report by the Federal Highway Administration.

First and foremost, the two studies are intended to recommend buildable solutions to the mobility challenges of a fast-growing county that also serves as a freight corridor to Charlotte and points North.

Gwinnett’s population grew by almost 20 percent in the past decade by adding nearly 152,000 residents, according to the 2020 Census. The growth has congested local roads and keeps commuters on I-85, where a third of the 340,000 vehicles a day go no more than two exits, according to reports by the Georgia Department of Transportation. 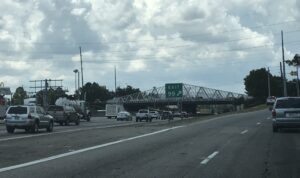 The average morning congestion on I-85 southbound stretches 11 miles, according to the Georgia Department of Transportation. (Photo by David Pendered)

In addition to commuter traffic, freight trucks use I-85 to travel between Atlanta, Charlotte and other points north. About 45 percent of freight transported on I-85 passes through the county without stopping, according to a GDOT report.

Gwinnett County is conducting one of the two studies, an update of its Comprehensive Transportation Plan. One of the first tasks of the consultant hired in July to do the job is spelled out in the request for proposals:

The final report is due no later than Oct. 31, 2023. It is to present county officials and residents with a robust report on anticipated transportation needs, projects that respond to those needs and the potential costs and funding sources of those projects. This list is not to be constrained by costs or funding sources, which will be considered in another step of the process. The RFP defines this resulting list as a:

The Georgia Department of Transportation is leading the other study. For the first time, GDOT is using a federal planning process known as PEL, for Planning and Environmental Linkages.