Please stay out of Atlanta for the NBA All-Star Game on March. 7, said Atlanta Mayor Keisha Lance Bottoms on Twitter this week.

Given the pandemic, it should be a made-for-TV event only she said, and encouraged promoters, bars and clubs not to hold events.

On to more metro Atlanta news this week:

Auburn Avenue’s historic Prince Hall Masonic Lodge building is getting a renovation, paid for in part with a new $1.5 million grant from the city.

By August this year, the building should be offering renovated commercial space for lease on the second floor and in the Hilliard Street storefronts. The renovated first floor and basement will be leased and operated by the National Park Service as an educational and interpretive exhibit of Dr. Martin Luther King Jr.’s Southern Christian Leadership Conference office.

The Lodge owns the building and will keep using the third floor for meetings.

Built in 1940 and expanded in 1955, the building housed some of Atlanta’s most important organizations like the Atlanta Civic-Political League; the Brotherhood of Sleeping Car Porters; the Madame C.J. Walker Beauty School; and WERD, the first radio station owned and programmed by African-Americans.

“We are investing in Sweet Auburn, in a site that is critical to our collective memory and also to our imagination when it comes to our basic identity as a city. And it’s really special to be a part of that,” said Fred Smith, a member of the board of Invest Atlanta, the city body that unanimously voted to approve the grant Thursday.

The cash is coming from the area’s “tax allocation district:” a zone where an increment of property taxes from quickly appreciating buildings is kept back to help fund projects that bring some community benefit. In this case, the money is from a fund that targets nonprofits and community-oriented businesses. 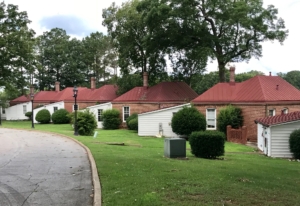 More than a year after launching their search, the agency that’s overseeing the redevelopment of the old Fort McPherson site found a new executive director right in their own building.

The biggest question for the authority is what to do with the roughly 130 acres of the old fort that have yet to be reused.  In 2017, the Fort Mac LRA chose a master planner who undertook a public planning process and came up with a plan for 4 million square feet of office, residential and shopping space. But Fort Mac then parted ways with its would-be developer about a year ago.  And in public anyway, things have been fairly quiet since.

This week, Meals on Wheels Atlanta, a nonprofit supporting seniors struggling with food insecurity, began constructing their new kitchen at the same location near 75 and Northside Drive.

According to Atlanta Senior Life, the updated space will be able to produce 600,000 meals a year, which is triple what the existing kitchen can accommodate.

Meals on Wheels is counting on the new kitchen to clear its “Can’t Wait” list of some 400 seniors who need meals.

Big Brothers Big Sisters of Metro Atlanta welcomes a new board chair and several board members.

Randy Tanner, an Atlanta native and co-founder of the insurance agency now known as Tanner, Ballew and Maloof, is named the new board chair. He has been involved with BBBSMA since he first became a Big Brother in 1991.

Nelson Boyce, a new board member, is an industry director at Google and focuses on travel industry advertising and marketing in the Eastern U.S.

David Duncan also joined as a member of the board. Duncan works with the Consumer Products Group at Georgia-Pacific.

The agency creates one-on-one mentoring relationships to help uplift the next generation. They serve roughly 1,400 children annually, according to BBBSMA.

Morehouse School of Medicine has secured a $1.1 million grant from Truist Foundation to expand the institution’s telehealth services.

Demand for virtual health visits increased 700% during the COVID-19 pandemic, according to MSM.

The grant will allow MSM to triple its telehealth capacity within the next two years, said MSM President and Dean Valerie Montgomery Rice.

The institution launched its telehealth program in 2018 to accommodate rural and underserved communities.

“Morehouse School of Medicine and Truist Foundation share a common purpose — to help our communities thrive. Together we can reach more patients and improve outcomes for the most vulnerable in our society,” MSM Senior Vice President for Institutional Advancement Bennie L. Harris said.

Incubator to cook up tech in Peachtree Corners

The idea is that those three will work together to help jumpstart startups that are working on drones, autonomous vehicles, robotics and other technologies which are also using using 5G mobile networks.

Coping with stress and anxiety at Carver

If handling physics and chemistry wasn’t enough work, students at the Carver STEAM academy, like others, are also dealing with the stresses of distance learning and a pandemic.

So the on-campus nonprofit COR is adding behavioral health services for the students they serve who are marginalized by poverty and race-based educational inequities.

“COVID-19 and the resulting distance learning made our mission to remove non-academic barriers to student success that much more important,” said COR Executive Director Jennifer Henn via a press release announcing the new offering made possible in part by a $100,000 donation from the AT&T Foundation.

Almost 70 companies are applying for one of perhaps six Georgia licenses to grow cannabis and process it into a therapeutic low THC-liquid. One of those companies is co-owned by former Braves star center fielder Andruw Jones.

According to a press release, Fytiko Farms Georgia would be located in a Turner County greenhouse and manufacturing facility, if the company gets a license.

Saturday, Feb. 20 – Inauguration of the Flowering Forest tree tribute to John Lewis at Freedom Park. From 8:45, several speakers are scheduled to give remarks, including Congresswoman Nikema Williams. Location: Freedom Parkway and Ponce de Leon. Volunteers are spending the weekend planting 300 trees in honor of the late congressman.