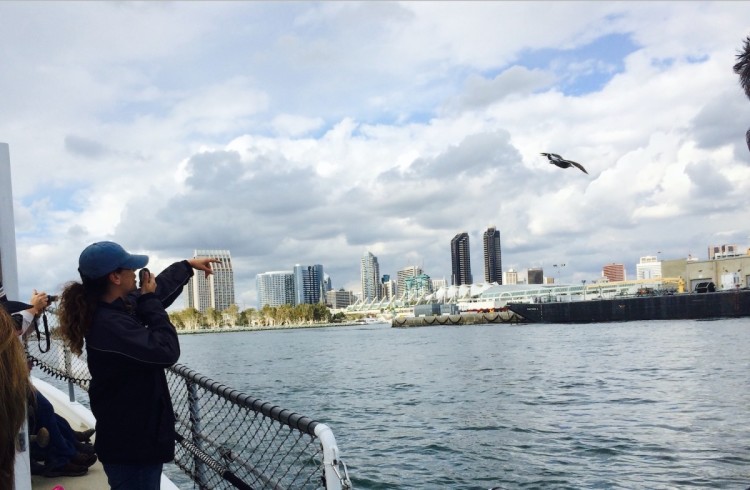 Courtney Brezinski, a narrator and deck hand aboard a Maritime Museum boat, dispels myths about San Diego in a tour of the harbor. Credit: David Pendered

Editor’s Note – This story is the second in a three-part series that examines the similarities of two leading convention cities – Atlanta and San Diego. Coming Wednesday: You mean I can take my dog?

SAN DIEGO – One fascinating aspect of the tourist attractions in San Diego is that a fair number of them are as much fantasy as those 100 miles north, in Disneyland.

Unlike Atlanta, with its Center for Civil and Human Rights and the Martin Luther King Jr. National Historic Site and Civil War venues, San Diego doesn’t offer a host of contemplative insights into moral-laden events and issues that have changed, and are changing, the course of history. Many of those portrayed in San Diego are make-believe. 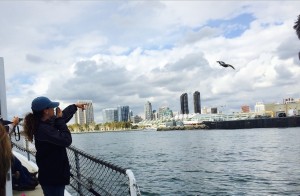 Courtney Brezinski, a narrator and deck hand aboard a Maritime Museum boat, dispels myths about San Diego in a tour of the harbor. Credit: David Pendered

To be sure, tours of the San Diego Bay highlight the Navy and ships used to facilitate the westward expansion.

Narrated tours aboard a Vietnam-era Swift boat take passengers past Navy ships that certainly play a tremendous role in history. The USS Midway Aircraft Carrier and the sizable Maritime Museum of San Diego are open to the public to provoke thoughts on topics such as morality surrounding aggression and defense, expansion, and harvesting the ocean’s bounty.

However, in terms of stroll-through venues set up for casual visitors, San Diego’s table is relatively small.

This can be liberating. There’s not much of a pop quiz around the table after a long day of sightseeing.

For example, tourists are freed from learning the history of the Spanish colonial buildings at the heart of San Diego’s famed Balboa Park. That’s because the buildings were built as props and storage houses for the 1915 Panama-California Exposition, to celebrate the opening of the Panama Canal and the trade it could bring to San Diego, park Ranger Kim Duclo said during a walking tour of the park.

The plan was to tear the buildings down within three years. Some were constructed so shabbily that they didn’t even have foundations, Duclo said. But money got tight during World War I and there weren’t funds for demolition, and soon the buildings had developed a following. Subsequent restorations have strengthened the structures, Duclo said. 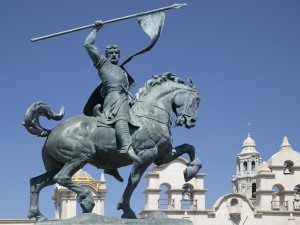 The Spanish military hero El Cid never visited San Diego. A statue of him is placed at the center of the Spanish colonial settlement recreated at Balboa Park. Credit: richard-seaman.com

At the crossroads in this Spanish-esque settlement, the El Cid statue is a delight to behold.

Again, there’s not much to learn about El Cid’s significance in San Diego – mainly because he was a noble Spanish military leader who never visited the New World.

Rodrigo Díaz de Vivar lived in Spain and fought for the Muslims or Christians, depending on who was hiring. The sculptress who donated the statue, Anna Hyatt Huntington, was the wife of a benefactor of the art world whose step-dad was a railroad magnate who helped build the first trans-continental railroad. Thus, a copy of Huntington’s El Cid is astride his steed on a plaza high above the city. The original is said to stand in front of the Hispanic Society in New York City.

Don’t even start with the Spanish conquistador Balboa, whose name adorns more than a few landmarks.

Vasco Nunez de Balboa was a Spanish conquistador who “discovered” the Pacific Ocean when he crossed the Isthmus of Panama and spotted the water. Some reports suggest that he saw the water that he dubbed the, “South Sea,” and returned across the dangerous isthmus – aware of disease and resistance from Native Americans. 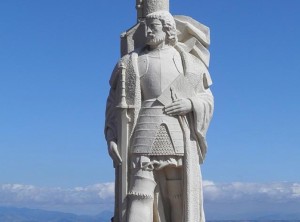 The statue of conquistador Juan Rodriguez Cabrillo was created with no idea of his true appearance, and his heritage is disputed as being Spanish or Portuguese. Credit: nationalparks.org

Even the Spanish conquistador Cabrillo is a mystery. That hasn’t stopped locals from attaching his name as ubiquitously as Atlantans attach the name, “Peachtree.”

An inspiring statue of Juan Rodriguez Cabrillo is placed near the cliffs above the sea at Cabrillo National Monument, on Point Loma overlooking the entrance from the Pacific Ocean to San Diego Bay.

Cabrillo is everything one could want in a Spanish conquistador: Clear of eye, stern of jaw, covered by armor and holding a sword in one hand, dividers in the other, and what may be a map.

Or not. Don’t know. San Diego has its own climate that insulates it from the roughness of other parts of the country. Cabrillo is quoted by the National Oceanic and Atmospheric Agency as saying:

Previous Article
Compared to Detroit, Atlanta is such a new city
Next Article
Loose on the Beltline by Kelly Jordan