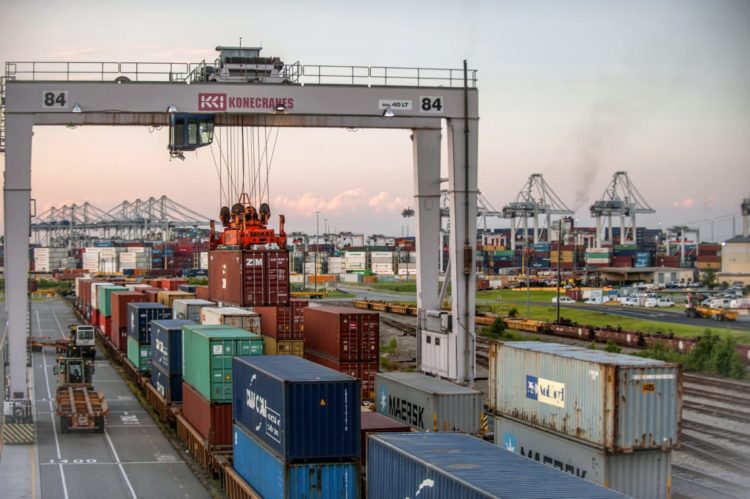 Cargo is loaded onto rail cars at the Garden City Terminal near Savannah. A $44 million federal grant the Georgia Ports Authority received Wednesday will help pay to expand rail access to the terminal. Credit: GPA/Stephen B. Morton

The Port of Savannah on Wednesday received a $44 million federal grant to expand rail access to and from the port. The funding promotes an objective to get trains in and out of the port more quickly, increasing Savannah’s competitive edge over other seaports. 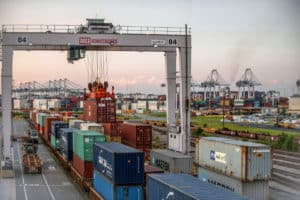 Cargo is loaded onto rail cars at the Garden City Terminal near Savannah. A $44 million federal grant the Georgia Ports Authority received Wednesday will help pay to expand rail access to the terminal. Credit: GPA/Stephen B. Morton

Rail shipments presently account for 18 percent of the cargo handled at the port’s Garden City Terminal. The Georgia Ports Authority has focused for years improving rail access to enable even more cargo to be handled by rail freight.

One recent example of GPA’s effort to address that is a $6.5 million rail expansion project completed in 2012. It cut six hours in round-trip train movements to Atlanta, according to a statement at the time. 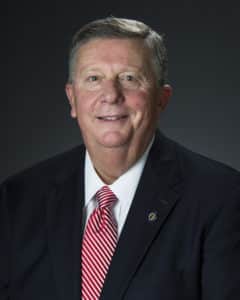 “Investments such as this, and the related inland rail facilities throughout Georgia, will help shift more containers from truck to rail, allowing greater efficiency and reduced highway congestion,” GPA board Chairman Jimmy Allgood said in a statement. “Rail cargo will play an important role in our future, not only increasing our capacity, but opening up new markets for Georgia’s ports.”

“This transformative project will not only increase rail capacity and velocity at the Garden City Container Terminal, but will also provide substantial benefits to surrounding communities by improving public safety, reducing environmental impacts and avoiding commuter traffic,” GPA Executive Director Griff Lynch said in a statement.

Freight movement was specifically addressed in the Fixing America’s Surface Transportation Act, or “FAST Act.” For the first time, the federal government is providing a dedicated source of funding for freight projects, including multi-modal, according to a fact sheet posted by the U.S. Department of Transportation. 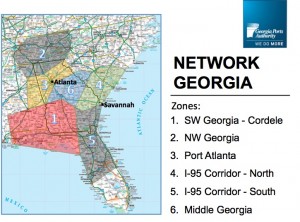 Network Georgia, the business development plan for Georgia’s ports, is an ambitious outreach to manufacturers and shippers in Georgia and five neighboring states. File/Credit: GPA

Members of Georgia’s congressional delegation trumpeted the funding they helped secure from the FAST Act for the port.

“I was pleased to support the FAST Act last year because the Port of Savannah and other projects around the state deserve the stability of a long-term plan from the federal government for transportation infrastructure improvements,” U.S. Rep. Buddy Carter (R-Pooler) said in a statement.

“Last year, I was proud to support the FAST Act because Georgia needs a long-term plan from the federal government to support urgently needed transportation infrastructure improvements,” U.S. Senator Johnny Isakson, (R-Ga.) said in a statement. “Local commuters and businesses in the Savannah area will also benefit greatly from the enhanced movement of maritime cargo and improved flood control.”

“Moving forward, the Savannah Port needs to increase and improve infrastructure surrounding the port,” Sen. David Perdue (R-Ga.) said in a statement. “With the deepening of the Panama Canal it is critical that there are adequate transportation corridors around the Port of Savannah to accommodate increased activity.”